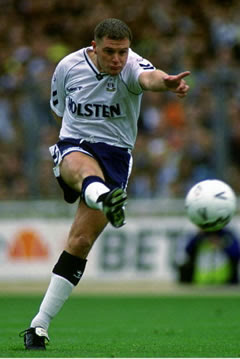 And he's the best by a mile, too. People with no interest in football perhaps fail to see why a person as foolish, gullible, destructive and infantile in his private affairs as Gascoigne should be so newsworthy. Isn't he just an overweight, loutish drunkard who got famous for principally the wrong reasons? They don't realise that he was, simply, a genius, an artist. He was a magnificent footballer, a once-in-a-century English prospect who, with just a tad more maturity and luck, would have ruled the game globally for 15 years. Even the suspicious system that England had at the time couldn't either dampen Gascoigne's enthusiasm nor waste his talent; he simply had to be the centrepiece of everything planned around the England team because he could win matches and qualify for campaigns on his own. An impertinent figure who emerged in Newcastle United's midfield, he moved to Tottenham - mistakenly for his lifestyle but not so much so for his game - and became a treasure of the nation as well as that bit of north London. He pretty much won the FA Cup for Spurs on his own in 1991, despite his notorious early exit from the final, and though the injury that ended his biggest day and delayed his big move to Italy took a while to heal, he maintained a level of brilliance and unpredictability that was without parallel in Europe. His spell at Glasgow Rangers made him the fittest and most dangerous he'd ever been, and though his England career peaked twice - the 1990 World Cup (as much in qualifying as in the tournament) and the 1996 European Championships - and troughed immediately after each, his cards were marked by all who observed him as the greatest talent to pull on the shirt. Immense in possession, strong, beautifully balanced, impudent when releasing the ball, fearless in shooting, devastating from set-pieces and, despite his infamous podginess, very quick as well, he had absolutely everything. Unfortunately, he also had a drink problem, a temper and a tendency to be led astray easily, but the football people who think of Gascoigne will always put the player ahead of the person. He was just so good.
Authored by Matthew Rudd
Email ThisBlogThis!Share to TwitterShare to FacebookShare to Pinterest
0 exclamations of response 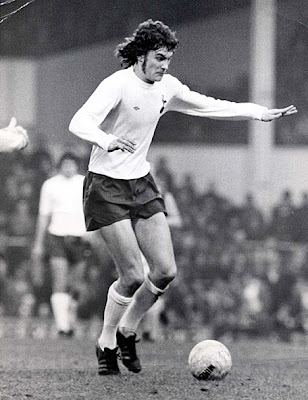 An indecently gifted and meticulous player, courted by every club in the land and divisive only among those who ran the game, which said everything about English football at the time. Hoddle, lanky and elegant, was the architectural leader in the centre of Tottenham Hotspur's midfield for more than ten years, gliding exquisite balls through daft angles and round impossible corners. Devoid of pace, he nonetheless had the capacity through hip turns and timed shimmies to leave defenders and goalkeepers on their backs, and his shooting, volleying and ability at dead balls simply had no equal anywhere in England, and probably Europe, at the time. He should have been playing for England at 20 - his debut actually came at 22 - and he certainly should have been the first name on every Ron Greenwood and Bobby Robson teamsheet throughout the 1980s, with the side built to suit him, but this was cautious, percentage-obsessed England, and often he would be sitting on the bench while lesser thinkers and harder tacklers blundered around the midfield. Loyal to Tottenham but desperate to be tested in a footballing environment that suited him, his move to play on the continent got everyone's blessing, and at 30 he went to Monaco to be influenced by Arsène Wenger as both player and, eventually, coach. That the great French football icon of the era, Michel Platini, declared that Hoddle would have won more than 100 international caps had he been French (he ended up with 57 for England over nine years), says everything about how tremendous a player he was, and how our system refused to appreciate it.

One left!
Authored by Matthew Rudd
Email ThisBlogThis!Share to TwitterShare to FacebookShare to Pinterest
0 exclamations of response 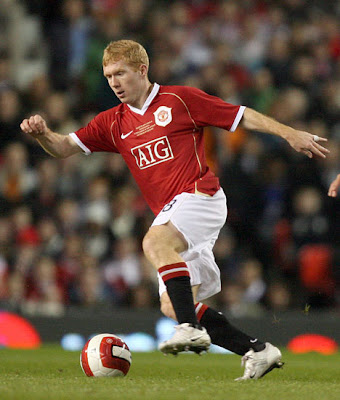 Where to begin? The evidence is still on show week after week, and has been now for almost 20 years. If you are a gifted footballer and wish to prove it, then being a mainstay for the most successful club side in the country for almost two decades, seeing any number of upstarts come and go in your time, is as good an indication as any, and Scholes has experienced everything in the club game there is to experience. Initially a centre forward and always a fearless finisher, he quickly became a cool, measured, ruthless attacking midfielder, who could and can place passes on an instep from the middle of the park to either flank, or make room for himself where there apparently is none to thread divine low balls into the path of many gratefully prolific goalscorers. His first touch has always been immaculate - witness how extraordinary his volleying ability is - and his absolute reliability (rarely do you see him play badly) means he has had at least two entire Manchester United midfields built around him while the world's greatest players queued up to laud his abilities. His England career was curtailed by his misuse on the left flank, prompting this quiet homeboy to sack it all off at the age of not yet 30, and his tackling is notoriously suspect, but nobody of the modern era of English football has been more influential or more praiseworthy.

Two to go...
Authored by Matthew Rudd
Email ThisBlogThis!Share to TwitterShare to FacebookShare to Pinterest
0 exclamations of response 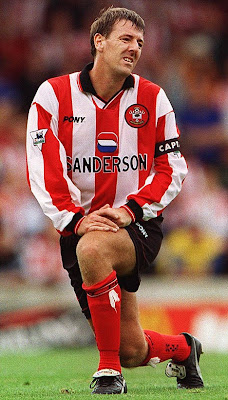 Many people scoffed at Matthew Le Tissier, claiming he was a laconic, unambitious, slightly portly plodder who only looked good because he chose for his whole career to play for a mediocre team. But even if most of the Southampton sides he graced spent their time fighting relegation - and always succeeding in doing so, might I add - he was clearly something ridiculously special, and would have been so wherever he played. Chelsea went after him in his earlier days, there were overtures from other multiply decorated clubs as his reputation grew, but he cast all attempts to lure him from the south coast aside. Southampton was his club, and for it he scored some unspeakably individual goals, the kind which no other player of his generation could have concocted. He had a glorious touch, superb balance, enough presence of mind to know instantly where to take the ball upon receipt, and a stunning habit of hitting bits of the goal apparently impossible to find. Many Le Tissier goals were self-made, with the flicks and lobs (and mildly scuffed finish, which he still bemoans) of that extraordinary effort against Newcastle, to the twist and turn and shot from a stupid distance at Blackburn, to that final pirouette and shot to say an appropriate farewell to the Dell, he could do them all. He was key to the early development of Alan Shearer as a feared finisher, and as managers, players and directors came and went, to varying degrees of success, Le Tissier was a constant of 15 years. That he won just a handful of England caps is actually irrelevant, as well as typical. He loved his club, his club loved him, and few one-club men can have given his fans so many memories of his brilliance.
Authored by Matthew Rudd
Email ThisBlogThis!Share to TwitterShare to FacebookShare to Pinterest
0 exclamations of response 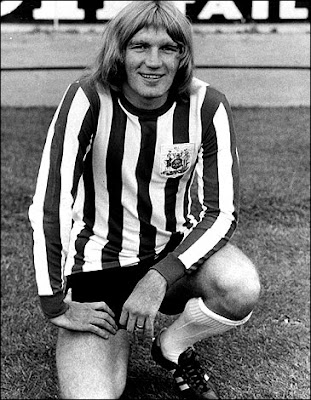 Those untrusted English mavericks of the 1970s; even they could be put into a pecking order. And of them all, the most gifted was Tony Currie. Beyond that, he was also probably the closest to a player that the overly-pragmatic system of the decade would allow to flourish. Raised at Sheffield United after three clubs in his native London cast him aside, he became the biggest of fish in a small pond at Bramall Lane, soon acquiring plaudits as a true visionary, whose capacity to control a football, seek out its target and aim it conclusively all in quick succession rendered him unique in the early 70s. Unlike the other players who eschewed any brand of work ethic in favour of flair, Currie wasn't a runner or a dribbler; he was a releaser of the ball, it was always his friend. Occasionally capable of beating five men, he nonetheless did so by patient wearing of defenders into the ground, making them dizzy, exhausting their spirit, rather than using pace or force. He was a phenomenon who was in the England team early via his most unglamorous South Yorkshire route, and only misguided coaching priorities and Currie's own injury record stopped him from running the midfield for the whole of the 1970s. A hero when he moved to Leeds United, who scored ridiculous goals and maintained a craftsman's ethic as the team around him declined, he kept an element of mystique as his career reached its twilight in the 1980s, and was still making foes look fools until he retired.
Authored by Matthew Rudd
Email ThisBlogThis!Share to TwitterShare to FacebookShare to Pinterest
2 exclamations of response