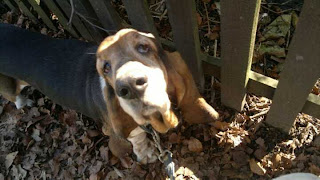 With every pet you bring into your home comes the knowledge that one day, he or she won't be there.

As the owner/servant of numerous dogs and cats at once, it's something I have to get used to. And overnight, Bentley passed away. I'm getting angrier with myself with each sad demise of a dog I've cared for. Bentley is the third to die, and for the third time I've not been there. He was staying at kennels with the other two Bassets while we holidayed in France, as has been the case for the last decade.

Two days prior to our return, the kennels left a voicemail saying he'd had a funny turn and they'd rushed him to the vet. He didn't come out alive. Bentley was 11 and a half, which is a decent age for a Basset hound, the breed being more prone to various canine illnesses than many others within the species. The strangest thing about him was that he seems, without much information to hand, to have died from nothing but old age. Given some of his lifestyle choices in his all-too-brief time on the planet, that comes ultimately as both a relief and surprise.

He came to us aged one, a Basset who had been born to breeders and showers in Lincolnshire but had been deemed not quite built correctly to become a major player as a showdog. A home was required and so when we went to collect Penny and Ruby from there after a holiday, we ended up bringing three back. Bentley was a cut-price, budget Basset and never less loved nor valued for it. He was slightly too long, his paws were slightly too big, his disposition was slightly too morose (for a Basset, even) and his discipline faltered regularly due to being a total wuss.

He wasn't cut out for showdogship but he was certainly cut out for housedogship. His life was one long sigh. He was the George Roper of dogs; all he wanted was a quiet life. Food, sleep, walks and plays were all he desired. The other dogs seldom allowed this, however. Penny was head dog and wasn't slow to pick on him; frequently she would start fights with him which would get his dander up but even then he was only forceful enough to defend himself, never to try to inflict harm on the dog giving him jip. When Boris arrived a year later, he made Bentley's life often miserable, but Bentley was classy enough to just accept his place in the pack and get on with whatever he was told. The four of them lived in the large kennel converted from half of our garage, and Bentley's sole purpose in the early days of this luxurious new accommodation was to get a bed with Ruby. This was despite a) there being four beds in the room, and b) Penny and Boris also wanting Ruby's nocturnal company. Bentley rarely won, even after Penny died in 2010, but never tired of getting into Ruby's bed, prompting Boris to bark and howl the district down until someone went into the kennel to get everyone in the right place. Every time Bentley was instructed to get into his own bed, he conformed, and every time it broke your heart that not only were you depriving him of cuddle time with his soulmate, but that he relinquished his place in the bed without protest or delay. He was a masterful dog.

He did have some rather gross habits. Let's just say that he enjoyed coprophilic pastimes; he was what Andrew Rawnsley may have called "scatalogically flawed". He did this all of his life and yet was never ill. The only time he ever had his tummy cut open by a vet was when he swallowed a mass of small gravel pebbles from the drive because, well, because they were there. The vet took each one out diligently and placed them in a glass jar and, while other more revolting habits remained, Bentley never took to scoffing stones again.

Not that he would have got a lot of joy from the stuff he shouldn't have ingested, because he seemed incapable of getting any from the stuff he should have ingested. He was a vacuum cleaner when it came to dining; a bowl of food would be placed before him and the suctionometer within his gut would be flicked on. Ten seconds later and his dish was empty and you had to ask yourself whether it had actually gone down the correct hole. His appetite never wavered, despite the one medical anomaly which affected him all his life; the state of his teeth. His rather unusual self-foraged diet didn't help, of course, but his teeth generally were a mess. Frequently the vet said some gnashers needed to come out - dental work being, of course, the one thing about canine health that insurance companies won't touch - and by the end there was only basic front molars left in his mouth.

The difficulty of eating without even a quarter of the requisite teeth didn't seem to affect him, however, except that the nourishment from his meals seemed to go straight to fighting the various dental infections that haunted him and, as a result, he never put weight on. He was long and skinny all his life and was skinnier than ever in his last weeks - yet his organs were working perfectly and his blood unaffected, right up to his last hours.

He was regularly thrown outside by Boris when it rained, leaving him standing under a quickly emptying cloud making confused woofing noises until someone went back to the kennel to restore order and tell Boris off. In the pre-Boris days when the three of them lived in the conservatory, Penny would regularly use her mood swings to send Bentley packing through the dog door. This was a miracle in itself, as when the dog door was originally fitted, only Bentley struggled to understand what it was for. The others went in and out even without a biscuit-shaped incentive at either end, but Bentley wasn't so convinced. His dimness became legendary and the training session with the dog door one Saturday afternoon provided great amusement to the neighbours to the extent that getting Bentley not to be frightened by a plastic flap over a square hole became a spectator sport.

But things like that frightened him easily. The blinds on the kennel would gently flap with the window open and this would petrify him, especially at night where his response was to try to share Boris and Ruby's bed. Boris would growl and Bentley would plead and, through the baby monitor upstairs, Muggins here would be roused from his pit by dogs squabbling quietly but threateningly at 3am, meaning a trip down to the kennel in dressing gown and slippers in all weathers to try to get Bentley to relax and sleep.

Never once did this dog fail to melt my heart when he was scared of something, even if it was something that wasn't actually scary. On Bonfire Night, it was a write-off. Initially, in his younger days, a loud radio would be enough to get him through the night without a nervous breakdown but then a fateful switching of bed positions one year meant he could also see the fireworks in the sky and that freaked him out completely. It was for this reason the blinds were erected - the blinds that would then scare him when they gently flapped - and so eventually we just accepted that we had a bit of a wimp for a dog. But there was nothing wimpish nor amusing about his terror on November 5th two years ago; he was so terrified that he soiled his bed and the whole kennel floor around him. I cleaned up heaven only knows how many times and eventually only the ticking of the clock and the decision of the neighbourhood to put the matches away and retire finally got him settled. The plug-in pheromone sprays and chocolate-flavoured relaxation liquids purchasable from the vet (at inflated prices, notch) helped him greatly as the post-November 5 firework sale meant that the village's party, and Bentley's nightmare, continued for several days more.

Bentley was old, tired and skinny, but he had pretty much all the health and more expected of a Basset when he went to the kennels two weeks ago with Ruby and Boris. He died alone at the vets overnight just 24 hours after refusing his breakfast and seeming to seize up in the run-out area of their kennel. At the vets, they tested his blood, which was fine, and gave him morphine to ease his pain, but the best they could diagnose was a sore tummy, and if my dog is set to die overnight, I want to know why. Now it's too late, and there are other aspects of the veterinary treatment and policy on this occasion with which I am deeply, deeply unhappy, but that's for another time.

We were abroad when it happened and arranged to come home early; eventually we got the dreadful news as we headed north towards the sea on France's motorway system. By the time we collected Bentley this morning, his long and lifeless old body had spent 24 hours refrigerated, and he was wrapped in a black plastic bag. He is now at the pet crematorium and his ashes box will be given to us next week, and he will join three other deceased pets on our bedroom windowsill.

And then there were two. Ruby, who has bad eyesight, is only eight months younger than Bentley and Boris is the pup, albeit a pup who will be ten in March. We collected them from the kennels and brought them home, and they had a look around for their old buddy/punchbag, only to not find him. They'll soldier on because dogs do. But Bentley has done his soldiering now and he will be missed greatly.
Authored by Matthew Rudd
Email ThisBlogThis!Share to TwitterShare to FacebookShare to Pinterest