No, it really does have to be taxing 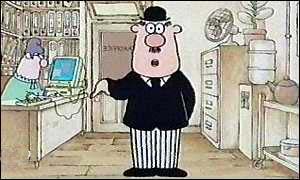 Freelancing has so many plus points - flexible working hours, picking and choosing, the joy of feeling in-demand when you are double-booked... bliss.

Unfortunately, the major downside is having to deal with the taxman yourself. And that time has come again.

Thanks to a severe fear that any minor revenue-based anomaly or tardiness will see me banged up with the nutters in Everthorpe, plus the handiness of an excellent accountant who lives 200 yards from me, I have managed to stay on top of this situation for the six years I've been off the PAYE system. More by luck than judgement, perhaps, but nonetheless I've told Hector what I earn and what I pay out and have stumped up the cash with reasonable grace.

However, this doesn't make the process any less uninviting, tedious or time-consuming. This week I spent a whole afternoon sitting on a pouffe in the centre of my living room, emptying out and cataloguing every receipt I had collected since April last year. They eventually went into envelopes marked per month, and now sit patiently in my spare room, next to me as I type this (a putting-it-off tactic) awaiting my hard drive. And sitting on a pouffe while leaning forward doesn't half do your back in. And throwing random bits of paper on the floor isn't an ideal tactic when five cats live with you.

I have to meticulously log every day I worked, every amount of money I spent on fuel, books, CDs and other stuff tax-deductible for my line of work, and every mile of distance spent on the motorways of northern England. For twelve months.

Then, once the expenses diaries are done, I have to print them all off, along with every invoice for every radio station and club I did every month. Add to that my bank statements, the bags of receipts (as back up), plus my domestic, credit card, mobile phone and subscription bills (Private Eye is tax-deductible, but I never used to claim Viz was) and the whole lot is then wheelbarrowed round the corner to the accountant.

He's a nice fellow who plays the revenue system really well. I sign the form HM R&C sent me months ago and leave him to it. Adam Hart-Davis gets his fee for telling us all that paying tax on time and without question or even mumbled protest is A Good Thing, and the wagon restarts its roll to the next April.

The things you forget you did when going through a year's worth of receipts. What in God's name possessed me to pay £6.45 for some stale fish and chips and a "refillable" Coke at some unclean motorway service station at some pisspoorly late hour? Well, hunger, obviously, but even late-night comfort grub on your way from drivetime in Stockton-on-Tees to overnights in Birmingham is not tax deductible. You could probably argue on a literal level that food is a necessary expense directly related to your ability to do your job, but without it I wouldn't be without the necessary tools of my trade. Consciousness and general health aren't on the list of items deemed vital. Revenue types aren't concerned with trifling inconveniences like malnutrition and death. Maybe that's why anyone I've ever known in the tax game looks so pale and unevolved.

There also is always a receipt for something perfectly deductible and - more importantly for the final bill - expensive which is declared invalid by the ink slowly fading off the paper, so the date is rendered totally invisible. Without a date, I can't confidently tell the taxman that I really did buy those four brand new tyres at 50-odd quid each during the financial year in question. So that's an extra 200 or so of the Queen's tokens I'll need to uncover later. I must write to Bush tyres and moan about the standard of the ink they use on their cheap receipts. Or maybe I'll just look at my fingernails and mutter that it's all a bit unfortunate really.

I appreciate that there are folk whose tax existences are a nightmare, with fines for non-payment or late-payment or late-submission coming out of their ears. Fines which, natch, are not tax-deductible (oddly, I'm not sure if I've ever asked my accountant if his fees for keeping me solvent and legal are deductible too). But this freelance, self-employed lark is only good until Hart-Davis begins his spiel again. I bet his accounts files are all alphabetically arranged, his receipts trimmed and carefully placed in the right scrapbook, his expenses diary neatly calligraphed with numerous flourishes and his accountant happily sunning himself in the Seychelles on his share of Adam's spoils. Which we pay for. And then might have to pay for again, so hang on to the receipt for that multipack of towelling socks ...
Authored by Matthew Rudd
Email ThisBlogThis!Share to TwitterShare to FacebookShare to Pinterest
2 exclamations of response If you have S.A.D. then you have my support, if not quite my sympathy. Ultimately, I'm suspicious of it - not because I don't believe it exists, but because it has a ludicrously convenient acronym. If I had an ailment which I labelled Melancholic Introverted Syndrome Every Rolling Year Gained Under Torpid Situations, you'd call me a lazy get and tell me to go to work.
Authored by Matthew Rudd
Email ThisBlogThis!Share to TwitterShare to FacebookShare to Pinterest
1 exclamations of response