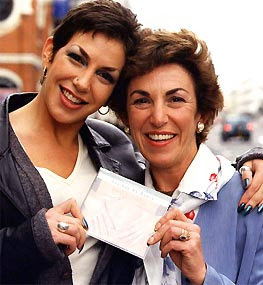 On the left is Debbie Currie, daughter of vampish ex-MP Edwina, who is obviously on the right. Debbie earned some brief fame when pretending to be a wannabe pop star as part of a Cook Report exposée on the music industry.

I was reminded of her yesterday when a colleague brought up her mother's name during a conversation, the nature of which now escapes me. It was probably about eggs, or something equally as predictable. Anyway, since the fake pop princess incident, Debbie has been in the papers for the usual kiss-and-tell reasons and stuff about single motherhood, and was chased a bit when details of her mother's (still hard to believe, and gross to picture) fling with John Major was revealed via serialisation of her diaries.

However, one of Debbie's first ever appearances in our beloved, ever-sympathetic press was down to me. At least in part it was.

That isn't necessarily a boast, as I hated hounding or chasing folk when I was a hack in Huddersfield; indeed, it was one of the many reasons I disliked the job and knew I wasn't at all cut out for it. But I must confess it was something of a buzz when the agency for whom I worked was assigned by a well-known Sunday organ to go after this young woman, and it was made easier by the positive reasons for it.

I can't pinpoint the exact year but I suspect it was 1996 or 1997. Debbie's mum was still a big attraction to the media and interest in her daughter had grown. She was an undergraduate at Huddersfield University, living in poky student digs near Great Northern Street, only a short distance from where Peter Sutcliffe took his one Huddersfield-based life at the end of the 1970s. It wasn't a pleasant place to live at all, and still had something of a red light reputation, but students had always occupied this short row of urban terraces.

All we had was some rumour that she had taken a particularly appealing part-time job with the local Kirklees Council to supplement her undoubtedly meagre grant. It was the kind of vocation that would lend itself to good quality photography. Our job as hacks was to stalk her, essentially, and then report to the paper's assigned photographer exactly where she was. He then would turn up with his gear, do his stuff, and we'd submit a handful of paragraphs of copy to accompany what was just a big photo story.

So, once we'd uncovered where she lived, we simply drove to the street and waited for her to leave the house, hopefully for her new place of work. As well as her student address, we'd established whereabouts in the borough this pleasing job of hers took place, so all we had to do was follow her and she would, hopefully, take us to it.

I was driving a battered V-reg Fiesta at the time, the 1980s model with an unmarked gear stick and considerable lack of comfort or style. It was all I could afford. My boss joined me in the passenger seat and together we waited in this not picturesque street, keeping a watchful eye on the house while still far enough away so as to not attract suspicion.

Eventually, Debbie left her front door and got into her car. We'd seen her before in a photo and instantly we knew it was her. The resemblance to her mother is astonishing, as you can see above. It was a similar reaction to when you saw Julian Lennon or Samantha Beckinsale for the first time. If it wasn't for Edwina's old bat status they could be mistaken for sisters, albeit sisters who were born when their mum was 16 and 39 respectively. So we had our girl. Now we just had to trail her.

It was difficult, as my Fiesta wasn't exactly a sharp mover, whereas Debbie didn't have an especially swift car but it was newer than mine and she was a bit of girl racer to boot. I don't think she knew she was being followed, even though her place of work was a bit of a distance and she may have noticed this rusty old white heap a car or two behind her every time she checked her rear view mirror. Nonetheless, she didn't half shift once she got going.

It was approaching rush hour in Huddersfield, and Debbie snaked through the traffic with aplomb. I was still a fairly new driver, with one serious rush hour accident behind me, and this was quite a test for my nerve at the wheel. We joined one of the A-road exits from Huddersfield and made our way east towards Dewsbury, thereby pretty much confirming the place of work we'd been given was correct.

Eventually we hit one of the Dewsbury suburb centres and Debbie parked in a schoolyard. We found a space on a single yellow across the road and (using a phone box; the agency couldn't afford one of those newfangled mobile things) rang the photographer, who was in the area and was just waiting for a precise location. Once he turned up, we left, our job for the day done.

A day later, we got a call saying the task had been a great success and a picture would be going in the paper. It was, and I assume remains, common practice for tabloid newspapers to inform people in the public eye that something is going to appear in their publication about them in the near future, to give them a chance to offer a comment or, at the very least, prepare themselves and loved ones in case the tale is damaging or unflattering. And so, yes, I was sent back to Debbie's unclean street - and this time I was knocking on the door.

Her flatmate answered and hollered up the hallway for her without asking who this scruffy bloke with a loosened tie was that wanted to talk to his chum. Debbie duly came to the door and I explained, carefully and politely, that she had been snapped doing her part-time job and would be appearing in a paper at the weekend. She wasn't remotely surprised, although she assured me she didn't know she had ever been followed on her way. I got a handshake and a smile. She was a very good sport indeed.

The photo was superb when it appeared, with our small scrap of copy underneath. I wish it was available online, I really do. She later ruined it by posing with fried eggs (a nod to her mum's past?) on her breasts during the pop industry sting, but the photo I recall was of someone just enjoying life, not seeking attention or notoriety.

In her white jacket and with the tool of her trade in her grip, she was the most exciting, interesting and attractive lollipop lady I had ever seen.
Authored by Matthew Rudd
Email ThisBlogThis!Share to TwitterShare to FacebookShare to Pinterest

Good story! I met Mum Currie a couple of times while she was Junior Health, and despite being naturally opposed to her politics, I had to admit she was always friendly and very good at her job. It would have been around the time she was privately gettin' jiggy with Johnny. Might have accounted for the spring in her step.

I'm fascinated by their eyebrows. Where ever do they get them done? And do they always go along together? That's one strong gene there.

Matthew Rudd: possibly too good at writing to be a news reporter.

Anyway, have a look at another excellent blog-based tale of local hackery, this time from Tom Harris MP.