How do Basset hounds sleep?

Soundly, in a word. 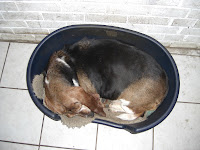 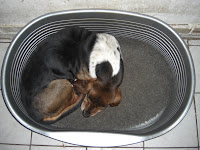 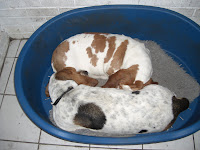 This is a photo of me with the chairman of Hull City, Paul Duffen; and the biggest superstar ever to play for the club, Jay Jay Okocha. 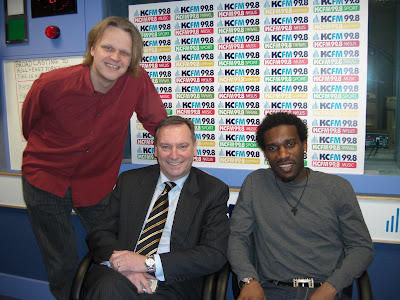 The chairman hosts SportsCall with me every Thursday evening and brings in a member of the first team squad each week as our guest.

Jay Jay's turn came, and the staff hung around to get autographs and photos. A mate of mine who travels to away games with me, Sleepy Chris, drove to the studios with his replica shirt to get Jay Jay's signature. Chris is mid-20s, educated and intelligent, but like my mate Joe's devotion to Justin Whittle, found himself thinking and acting like a starstruck ten year old again.

The programme flew by and Jay Jay was a gent. It was among the most exciting moments of my career so far.

You can hear the full discussion on the podcast, which is free to download.

For those of you non-footballists who are unconvinced, watch this...
Authored by Matthew Rudd
Email ThisBlogThis!Share to TwitterShare to FacebookShare to Pinterest
0 exclamations of response

"This frail old priest holds all the answers to Iran's problems..."

I was idly going through YouTube yesterday when I discovered - by accident, as I think all our best YouTube discoveries are - that someone had uploaded some episodes of The Rock and Roll Years.

Now, as a rampant nostalgist who loved this series first time round, I was thrilled to bits. The episodes from 1973, 1975, 1979, 1981 and 1987 are up there, in three-part chunks each, and I've spoilt myself by sitting before the screen and watching them all.

The episodes from the 1970s fascinate me particularly, it being a decade of such international and national change and uprising which I lived through, and yet the oldest I ever was in the 70s was six and a half. So, as the Russians were streaming through Afghanistan, all I was concerned about was getting my Shapes Cards right at school, avoiding the slipper from my dreadful matchstick headmaster Mr Bowers and getting my own Tomahawk bike for Christmas.

I don't know what it is about the 70s, but the decade always seems, well, dangerous, to me. I don't suppose in terms of actual events, political changes or tragedies it was any more dreadful than the decades either side of it. Maybe it's the grainy footage, the dull clothing, the presence of casually sexist men droning on, the uninspiring motor vehicles, the last time the pre-war generation could try to make us return to Victorian values before punk came along and finally made their views permanently obsolete. Colour television became the rage, but the colours on show, especially on film, were often so bleak.

I watched the 1975 episode with interest because, like Andrew Collins, I have an innocent interest in serial killers - and this was the year of the Black Panther. It was this episode which also made me realise that each were done on a monthly chronology - Neilson's abduction and murder of Lesley Whittle was done in January, so it featured at the beginning of the episode, but he was arrested (luckily and accidentally) in December, so magistrates court footage (and a brief word of relieved joy from the maligned detective Bob Booth) was used close to the end. The 1976 episode isn't uploaded, so I don't know whether any of the news footage of his trial and conviction is thereon.

I was only 18 months old when 1975 began (I'm reminded of Bill Hicks - "where is all this shit happening, man?") and was probably just blissfully gurgling in a pushchair and being accidentally (I hope it was, anyway) left outside the Hedon branch of the Co-Op in my pram by my mum who had forgotten she'd taken me shopping. Ignorance due to pure lack of age really is great. Of course, bleak news stories are soon sugared up by great music, which is the point of the TR&RY - for every Black Panther atrocity, there was Steve Harley and Cockney Rebel doing Make Me Smile.

The 1979 episode brings about more vivid stuff, yet amidst all the stuff about the winter of discontent, the political changes in Iran, Margaret Thatcher's election and the Russians in Afghanistan, my memories consist of those Shapes Cards, a caravan holiday in Dorset, a new school opening in Hedon (thereby taking away half my mates in one fell swoop) and learning to swim at Haltemprice pool. A happy and safe life continuing in a world supposedly full of madness and calamity.

I was six, so remembering news stories is obviously something I can do only scarcely. I do remember school being shut for a bit, but couldn't equate it to the winter of discontent. I remember quite a few songs - Girls Talk, Born To Be Alive - just because they were on a radio at the caravan site when we went into the shop there. Also, the great conversation my (then) nine year old brother had with my mum in the caravan, which went like this:-

He then decided to enquire whether the same song referred to an alcoholic drink with a frothy top - "cider head". This time mum put him right straightaway, and laughed.

The stories featured in the 1981 episode I remembered most of. I didn't really understand the hunger strikes as an inquisitive eight year old, but I recall an assembly in school where our deputy headmaster told us, apolitically, what was going on. He did likewise later in the year when Anwar Sadat was shot. I couldn't possibly understand the conotations of Egypt's loss at the age of eight, but I like the fact that he tried to tell us in our own terms.

1987 was formative stuff for me - I was 14, listening to the Housemartins and watching lots of telly. It was a year of loads of tragedies - the hurricane, Zeebrugge, Hungerford, King's Cross, plus Terry Waite's kidnap - and yet when you see footage of the Proclaimers looking more out of place on Top of the Pops than anyone else in the programme's history (even George Cole had less self-consciousness...), again it supplies sugar to help force the medicine down.

I hope someone has the remaining episodes from the 70s and 80s to upload, as I can think of nothing I'd like to watch more.

One last thing about TR&RY - the theme music is credited to Sean Byrne, but I suspect a legal minefield had to be swept in order to allow it. There are re-riffs from Jailhouse Rock, Johnny B Goode, You Really Got Me, (I Can't Get No) Satisfaction and Layla (lest we forget the original series was the 50s to the 70s only) all cunningly but obviously linked together and somehow made into something new. Given the lawyers for the Rolling Stones' treatment of Carter USM and the Verve in more recent times, I'd be surprised if the two second re-recorded clip of their song didn't prompt a quick writ.

The 80s version is similar, albeit this time credited to Ben Sugden - on there are bitten sounds of 1999, Like A Virgin, Born In The USA, Every Breath You Take, Do They Know It's Christmas? and The Look Of Love (the last of which seems to be the actual Martin Fry woah-woah-woah ending). I wonder if a small donation was made to the Band Aid appeal for such blatant use of their record?
Authored by Matthew Rudd
Email ThisBlogThis!Share to TwitterShare to FacebookShare to Pinterest
1 exclamations of response 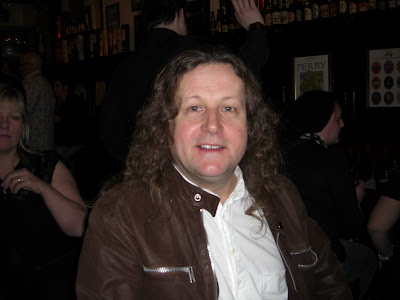 I haven't much to say at the moment, so as compensation, here's a large and gratuitous picture of BBC Radio 2's heroic Alex Lester, enjoying his ninth pint of the evening at the Black Boy public house in Hull, last Friday.
Authored by Matthew Rudd
Email ThisBlogThis!Share to TwitterShare to FacebookShare to Pinterest
0 exclamations of response

She ain't no witch, and I love the way she twitch...

Our 70s Night tonight consisted of the following:-

Abba "Take A Chance On Me"
Argent "Hold Your Head Up"
Leif Garret "I Was Made For Dancing"
T Rex "Hot Love"
Detroit Emeralds "Feel The Need In Me"
John Travolta "Sandy"
Fox "Imagine Me, Imagine You"
Michael Jackson "Off The Wall"
Hollies "Long Cool Woman In A Black Dress"
Skids "Into The Valley"

My iPod is sitting next to me, charging nicely up. So I thought now would be as reasonable a time as any to try another round of .... iPod Roulette!

So, on with the shuffle songs mode, and the first five out are...

1: Going Nowhere - Gabrielle
I've never bought a Gabrielle album but I've always found her songs listenable and lacking in blandness. Not the biggest compliment in the world perhaps, but not an insult either... and this song does at least tell you where the famous chorus for Alanis Morissette's You Oughta Know really came from. I've got Gabrielle's Should I Stay on the iPod too.

2: Love Is The Drug - Roxy Music
Oooh, aye. Great intro, fantastic motor car sound effects, shameless hedonism and a seediness which is well within the borders of acceptability. It's life as a man in need. It's awesome.

3: Left To My Own Devices - Pet Shop Boys
"Learn to ignore what the photographer saw!" Not a song designed to show off Tennant's pristine rhyming couplets, but the combination of concert strings and beefed up synths, plus his half-arsed delivery, still makes this song work on so many levels. The words to the chorus are so simple and yet so effective. Five minutes of thoroughly gratifying listening. It dies on an 80s dancefloor, mind.

4: The Most Beautiful Girl - Charlie Rich
All I know about Charlie Rich was that he had, er, a rich head of grey hair and a fantastically pleading voice. This was on my dad's country compilation albums and I grew up with it. Marvellous.

This is the six minute version from Mixed Up. What I do adore about this record, in its regular or longer form, is the way a new track is introduced in each bar, a bit like when you hear either version of Close To Me. Again, a simple but heartfelt lyric and that element of mild constipatory pain Robert Smith put into his singing lifts the song above the gloom.

I'll put the iPod back on charge now. Over to you...
Authored by Matthew Rudd
Email ThisBlogThis!Share to TwitterShare to FacebookShare to Pinterest
7 exclamations of response

Has the word "bird" again become semi-acceptable to describe a lady in a light-hearted way?

It was prevalent in our less enlightened times, of course. Yet within all the grotesque racial and sexual slurs and soundbites, there seemed to be something quite daffy and honest about describing a woman, be it one's girlfriend or just a random female about town, as a "bird".

Like everyone else, I stopped using it when lunatic women who decided they represented the views of every female in the whole world told us it was tantamount to assault. Now, however, it's back in the language, and it doesn't seem to carry any tag of offensiveness. It needs context, of course.

I rather like it. Moreover, women seem to use it too - "upper class bird"; "top bird"; "daft bird" are all expressions I've heard perfectly sane women, comfortable with their gender, use in public. Nobody with a buzzcut has smashed them across the head for showing disrespect to the Suffragettes, or something equally as extreme.
Authored by Matthew Rudd
Email ThisBlogThis!Share to TwitterShare to FacebookShare to Pinterest
5 exclamations of response