Not for sale to children I hope I'm not revealing too much when I say that recently, when I had cause to kip on his settee after a substantial ale and radio nerd session, I noticed that Alex Lester reads Viz.

Now, it's not his only reading matter, I should add with haste. Magazines are scattered around his London flat's spacious drawing room of varying highbrow topics, including cars, property, finance, cinema and music. No sport ones, obviously. Fortunately, he didn't spoil it by adding the Guardian. But if he ran a high-class beauty salon, he'd have the waiting area's organ range sewn up.

But Viz? I stopped reading Viz a while back because my sub-conscious told me I probably should. And yet Alex, who he won't mind me admitting on his behalf has a biological generation on me, is still reading it.

Do you still read it?

I was as avid a reader as anyone for years. I first purchased it when I was 16 (back in the days when buying Viz was akin to buying the Sunday Sport for the first time) and probably continued until I was 30, possibly longer. Even the youth with spectacles, a Grade 8 in viola and extra starchiness within the underwear department would have found Viz funny.

I purchased a Spoilt Bastard T-shirt and wore it to work at the pizza takeaway where I made a few quid three nights a week. My employer sent me home to change.

I tried to wear a Roger Mellie T-shirt (complete with 'Bollocks' catchphrase, natch) prior to a sixth form trip to York University's Open Day. My head of sixth form, a man both myself and my parents detested, sent me home to change. This one annoyed me, as Warren Draper regularly wore a Johnny Fartpants T-shirt to school and no-one batted an eyelid.

I loved the subtleties of Viz. The way they put a certain character on the front page but, because of restrictions over expletives being disallowed from front covers, felt the need to spoonerise his name. Hence the main drawing was of a chap called Wockney Canker.

As for the strips, well beyond the A-listers I always thought Mr Logic and Spawny Get were always well written and underrated characters. I never quite got the point of Black Bag or Gilbert Ratchet.

There were, of course, numerous one-off strips, and here we get to my favourite ever Viz moment. The character was called Shirker Bee, and essentially he was a bee among millions of workers, in a regular hive, who wouldn't do any work - feigning illness, quoting contract terms, using union regulations, making militant threats, anything to avoid doing his job. It was in a 1998 issue (I only know this as I remember the lass I was seeing at the time reading it too) and it remains one of the funniest things I have ever read.

It's odd that despite being of a humour which is clearly not going to appeal to everyone, Viz has now entered the establishment as the respected wing of the adult comic fraternity. Chris Donald et al have done the rounds of talk shows, clip shows and tribute documentaries. When they satirised the frightful Trinny and Susannah as school bullies, brilliantly, and the humourless pair threatened to sue, Donald's official response to the media was: "We're too busy laughing to comment."

Maybe that's why I don't buy Viz any more. As a teenager, it was a semi-rebellious thing to do (my mum never read it; had she done so she'd have baulked more than she would have done if a copy of Club International had been lying round in my room) but now it's no longer daring, and hasn't been for years. Yet Alex, a man who has made a point of never growing up completely, enjoys a lazy laugh at Sid The Sexist to this day.
Authored by Matthew Rudd
Email ThisBlogThis!Share to TwitterShare to FacebookShare to Pinterest
3 exclamations of response 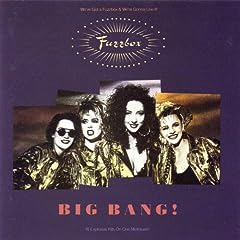 Any ideas what any of the Fuzzbox ladies are doing now?
Authored by Matthew Rudd
Email ThisBlogThis!Share to TwitterShare to FacebookShare to Pinterest
9 exclamations of response

Every football fan's heart goes out to you Geoff, especially those of us who saw all those goals fly in at the Shay.
Authored by Matthew Rudd
Email ThisBlogThis!Share to TwitterShare to FacebookShare to Pinterest
0 exclamations of response

Slap my top of the morning to you

Alex, my friend, occasional drinking partner and frequent gossiping partner, is covering the Ken Bruce slot on Radio 2 for the remaining two days of this week.

9.30 til midday, then...
Authored by Matthew Rudd
Email ThisBlogThis!Share to TwitterShare to FacebookShare to Pinterest
3 exclamations of response

Hurrah! Five-Centres is back, albeit with a new URL. It's addictive, this blogging business...
Authored by Matthew Rudd
Email ThisBlogThis!Share to TwitterShare to FacebookShare to Pinterest
0 exclamations of response