Now I am seriously hacked off. Why should Lesley Douglas resign and Jonathan Ross stay in a job? I am sick of this "baying mob" mentality which demands a senior head should roll when some arrogant twerp decides he is untouchable and too powerful to be affected by controversy.

Jonathan Ross should quit. Or the BBC should do him for gross misconduct. If committing a broadcasting faux-pas serious enough for his controller to fall on her sword doesn't represent gross misconduct, then we may as well all climb under a rock right now.
Authored by Matthew Rudd
Email ThisBlogThis!Share to TwitterShare to FacebookShare to Pinterest
6 exclamations of response

I initially wrote this in the comments section of Andrew's blog entry on the Russell Brand/Jonathan Ross furore, but as my comment is the 106th of more than 150, you might not have seen it. Oh, to have a readership of that volume...

So, lovingly reproduced here, my view:

If it had happened on commercial radio, the perpetrators would have been sacked on the spot.

And if the BBC do get rid of them, maybe they could replace them with career broadcasters rather than celebrity chancers who see radio as an easy, part-time payday.

You can add BBC local radio to the comment about the commercial industry, by the way.

Since I wrote this, Brand has quit. I've only ever liked him once, and I have to say I couldn't bear him on the radio. Don't believe the figures quoted; he had fewer than a million listeners at 9pm on Saturday nights, with his audience naturally preferring to get legless when he's on air (as does Brand himself, as he pre-recorded every programme he did) and download the podcast later. The podcast figures are the ones that bump up his profile, but podcasts are no good when RAJAR comes round.

My main gripe is that the BBC won't learn from this. In both Brand (comedian) and Ross (television host), they hired celebs for whom radio isn't and never has been their bread and butter, but a lucrative part-time job which pays for the holiday each year. If they don't see it as their main source of income, they won't treat it with the same respect. I've seen with my own eyes certain famous individuals who think radio is just about talking, and then they suddenly dry up when the red light goes on and develop an expression of sheer, inconcealable fright. This is why I also hate it when the credential-free likes of Aled Jones (singer) and Davina McCall (shouting hair product pusher) get Radio 2 daytime cover - on the grounds that what they lose in listeners they'll gain in headlines - instead of any number of professional, career presenters within the network (and not just Alex Lester, but the likes of Richard Allinson, Mo Dutta, Janice Long, Pete Mitchell).

Brand has resigned, but it's unlikely that an ambitious, talented broadcaster who has carved a fine industry-wide reputation will get a nice Saturday night gig to create their own national status as his replacement. They'll find someone else off the "trendy" list, for whom radio is something to toss about with, and wait for the figures to slump or the ego to take over, both of which seems to have happened in Brand's case.
Authored by Matthew Rudd
Email ThisBlogThis!Share to TwitterShare to FacebookShare to Pinterest
8 exclamations of response 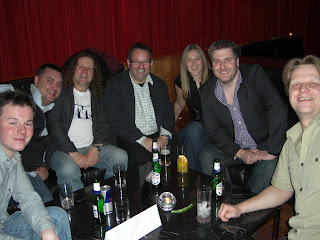 It was a rather splendid night out in Manchester, my favourite city, which saw the latest reunification of our little group of wireless pals. Now when he covered Ken Bruce's show the other week, Alex claimed it was set to be a "nerdy DJ" night, like our previous soirées in Hull, Birmingham and London, in which we "talked about little more than jingles".

He's exaggerating. Well, he is this time, as our main jingle obsessive, Simon Hirst, was unable to make it. Instead, it was a night brimmed with outstanding (and largely unreproduceable) anecdotes from Alex and his long-time friend and Radio 2 colleague, the golden-voiced Charles Nove. Over a fab meal at Sam's Chop House (during which Alex took a photograph of his exotic-looking corned beef hash with a poached egg on top), the two men alternated in telling gloriously indiscreet tales about their careers and celebrities they have by chance encountered in their various workaday duties as presenters, announcers and v/o artists. The laughter was explosive and long, and the other diners - not to mention the startled waitresses - gave us some most funny looks.

Our host, my longtime pal Martin Emery, then took us up the Hilton skyscraper where a bar called Cloud 23 is to be found on the, er, 23rd floor. The first 22 floors fulfil Hilton's regular brief - hotel rooms - then the 24th onwards are luxury flats apparently owned by footballers, soap stars and the generally wealthy.

I assume Cloud 23 is exclusive - it certainly felt as much judging by the effort Martin and his partner, who works in sales at one of Manchester's commercial stations, had to apparently go through to get us not only within its walls, but to jump the large queue of "ordinary" punters waiting by the lift. Among them was Lynda Bellingham, no less. It's quite something when you are regarded as a VIP but Lynda Bellingham isn't. Anyway, she almost got to the front of the queue by the time we entered the elevator, as Charles and she go back years and they had a good natter while we tested out the bucket seats, possibly the comfiest things I've ever parked myself in. I thought about approaching Lynda, but all I wanted to bring up was her cameo as the woman who ran the Bloody Flora "agency to the stars" in Filthy, Rich & Catflap, which I'm guessing she doesn't regard as her finest hour.

Once up there, it was very plush. The waiters were most efficient, with that brand of close-to-obsequious customer service which, for all its merits, I find rather alarming. Anyone in a service where fawning over spoilt and ungrateful members of society (not including us, natch - we were all charming) is a key part of the job deserves our sympathy. The feeling of exclusivity was matched by the prices of the drinks, be it the fruit thing I ordered (I was about to head back to the hotel, as I was on breakfast show at Pure FM the next morning) or the bottles of Peroni which everyone else chose. Unbelievably dear, they were.

The clientele consisted pretty much entirely of wannabe WAGs (though Friday is entirely the wrong night to pick up a footballer, given that they are all on curfews prior to the next day's game - this perhaps is indication that such wannabes have the requisite intelligence quotient to get the job) and men in part-open shirts loudly talking about the credit crunch. The saving grace was the view out of the window, looking as it did over all of the bright lights of Manchester, a city I adore. I supped my fruit drink and enjoyed the view and the prolonged stories of Alex and Charles before walking at a leisurely rate back along Deansgate, passing the carnage spilling out of each pub, towards my hotel. I understand that my companions weren't far behind me, baulking at the prices and the lack of rounded characters frequenting the place, so they went back to the hotel too in order to drink the bar dry of its (warm) beer until 4am.

I left at 6.50am the next day, headed for Stockport, where I was on air at 8am. I gave myself 20 minutes just to exit the car park, an appallingly designed underground thing where you were blocked in almost beyond escape even when every car was, according to the lines on the concrete, parked entirely legally. Inch forward, turn the wheel full, inch backwards, turn the wheel back ... etc. It took forever and at one point I thought I was trapped. It was only when I heard a cheer as I apparently touched ever so slightly the car parked next to me, that I realised I had become a spectator sport. Two blokes at ground level had just gone up a crane and had the perfect bird's eye view of my attempt to get clear of this wretched car park. As I finally wrenched the Mondeo clear and through the mazy car park and into the street, we exchanged a thumbs-up before I roared back along Deansgate and headed for the A6.

Our next so-called "nerdy" night will be in Leeds just before Christmas. Check out Alex's blog because before long that photo of the corned beef hash will be on there.
Authored by Matthew Rudd
Email ThisBlogThis!Share to TwitterShare to FacebookShare to Pinterest
0 exclamations of response

Erm, anyone got a candle?

I've just realised that this blog is one year old. In fact, it was one year old on Friday. I'm normally good at remembering birthdays, too.

Anyway, I'm still wittering on after 12 months because of your encouragement and inspiration, so ta for that.
Authored by Matthew Rudd
Email ThisBlogThis!Share to TwitterShare to FacebookShare to Pinterest
4 exclamations of response

Keep the kids from the fire

In the post below I said I have "not tried to appear on a television show before or since" once my audition for Telly Addicts had failed.

Later the same day - this. 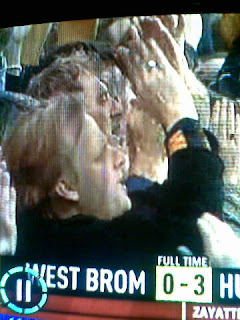 Profuse apologies. Blame the cameraman.
Authored by Matthew Rudd
Email ThisBlogThis!Share to TwitterShare to FacebookShare to Pinterest
4 exclamations of response