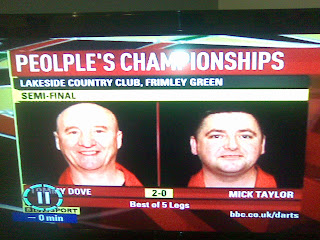 The Daily Mail will just love this - falling literacy standards and an excuse to bash the BBC. If only darts were able to affect the house prices too...
Authored by Matthew Rudd
Email ThisBlogThis!Share to TwitterShare to FacebookShare to Pinterest
3 exclamations of response By linking to newspapers in the Midlands, Sussex and west Wales, they claim to have shown their provincial colours. Maybe adding more stories which originated in these areas in the first place would serve this purpose more adequately.
Authored by Matthew Rudd
Email ThisBlogThis!Share to TwitterShare to FacebookShare to Pinterest
1 exclamations of response 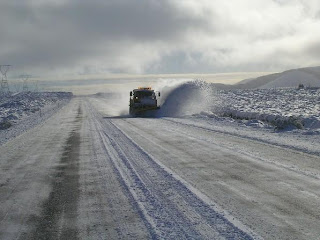 A text from my uber-cynical mate Kev, received this morning, gloriously parodying the reaction we get from our bored media when a spot of white stuff drops from the sky:

"I think ... Yes ... It's actually true. It's, it's SNOWING! Quick! Close all the schools! Put your brakes on! Quick everybody - set off at the same time just in case! Cancel the trains! Close the roads! It's actually SNOWING! Let's close the country down!! Snow has fallen: Britain - CLOSED."

Snow itself, and the arrival thereof, is not news until it prompts a major road accident (although minor ones like mine last year are not newsworthy unless you have a blog). What's more newsworthy is our patent inability to deal with it, handle it and adapt to it. The stuff also seems to become more newsworthy if it happens to fall somewhere in the south of England, whereas - anyone got some vinegar for this chip on my shoulder? - here in the north it's cold and horrible and unsettled and gruesome all the time anyway, and therefore snow should be regarded as entirely normal.

I loathe snow beyond words. It's cold, useless, disruptive and dangerous. We really shouldn't give it this much publicity or it'll start wanting to fall more often.
Authored by Matthew Rudd
Email ThisBlogThis!Share to TwitterShare to FacebookShare to Pinterest
3 exclamations of response

I saw the photo of the new Doctor before I'd read his name, and I thought for a moment it was Martin "Spider Nugent" Hancock, a chap who was briefly a drinking buddy of mine in Stockport when he was in panto and I was on the radio.

Red Guitar by David Sylvian. It was way too clever, meaningful and incomprehensible for my 11 year old mind when it came out, but I bought it nonetheless. I still love it, and I still haven't the faintest idea what is going on.

Sylvian was new to me, as a name, when he began his solo career with this in 1984. I'd heard of Japan but didn't associate Sylvian with the band until I read stuff about him in the pop journals.

The publicity for this was excellent. The photo was of Sylvian and that remarkable swathe of boyish blonde hair, encased in his own swirling cigarette smoke. Japan fans and avant-garde young adults flocked to buy the record, allowing it an entry at #21 on the charts. It climbed to #17 a week later and then did a disappearing act.

This was unsurprising. Sylvian was one of those fallen New Romantic bandleaders, like Sal Solo and a little like Marc Almond, who was determined to find the niche fan and ditch the heaving throng when he grew up and went all pretentious for his solo career. The casual pop kid who may have enjoyed Quiet Life but baulked at Ghosts would not have been attracted to Red Guitar at all. But the welcoming committee from the pop press was pretty warm and the reviews were good.

Heavy duty synth pop dominated the charts at the time. It was good, relevant, entertaining and it was timeful too. But Sylvian came along with this single; a foggy, darkened slice of shoeless, chordless weirdness with no discernible musicality and yet something starry within it. I wonder if anyone was ever able to turn it into sheet music.

Tom Hibbert made it Single of the Fortnight in Smash Hits, and it also got on Now 3 as the closing track, tailing a listing which had included the uber-cheerful hits of the time by Wham!, Gary Glitter, the Weather Girls and that faux-Euro laughter and goofing from the crowd listening to the Art Company somewhere near Utrecht. The album was Brilliant Trees, and I got it for that fabled 11th birthday where Howard Jones' album was the main pressie of choice. I listened to it a lot more than initially anticipated after Human's Lib succumbed to chewed tape, and I really got into it. The polaroids and Sylvian's handwritten lyrics were good. I still didn't know what was really going on though. I still don't.

The Ink In The Well was the follow-up, which just wiped its feet within the Top 40, then out came Pulling Punches, a single which missed the charts entirely. Morrissey reviewed it in Smash Hits by saying that Sylvian sounded "like he was about to spend his third year in bed". When Tears For Fears launched the Songs from the Big Chair album later the same year, they said they "used to be on the planet Sylvian, but now we're on the planet rock 'n' roll."

The mid-80s obsession with pop stars' sexualities, which lazily dictated that the happily married Nik Kershaw must be gay because he sported an earring in his right ear rather than his left, meant that Sylvian, boyish and yet distantly androgynous, was asked about his own preferences. His reply to the question: "Are you homosexual?" prompted a great reply, which I've never forgotten.

"No. I don't find men sexually attractive, but I've been to bed with them. Does that make me homosexual?"

Sylvian fell off the radar after 1984, but there's something still faintly intriguing about Red Guitar which makes me listen to it every so often.
Authored by Matthew Rudd
Email ThisBlogThis!Share to TwitterShare to FacebookShare to Pinterest
1 exclamations of response