We were never being boring

My interview with the Pet Shop Boys is on Q Radio tomorrow at 6pm. It's a biggie, and they were fascinating and terrific fun. 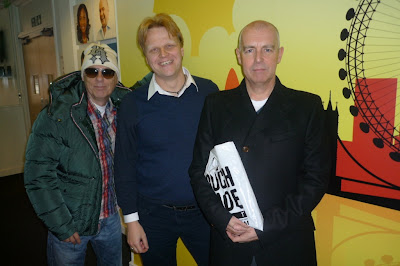 We are on DAB in London, online here and on Freeview channel 716. They've picked some remarkable music, 20 tracks in total, and I shall put them all on this blog on Monday after the interview has been broadcast.

I promise to shut up about it after that...
Authored by Matthew Rudd
Email ThisBlogThis!Share to TwitterShare to FacebookShare to Pinterest
1 exclamations of response

It's Children In Need tonight. A few quid has gone into a tin and I shall be watching Coronation Street and the Grand Slam of Darts, before perhaps enjoying Newsnight with a nightcap.

This doesn't make me cold or unfeeling, as I'm all for the cause. But filling hours of licence-funded airtime with JLS, Take That and Cheryl Cole, all coincidentally with new records out, while making Kate Silverton dress up as Lady GaGa and singularly reminding the country that Gaby Roslin exists, means there is little televisual merit in it whatsoever.
Authored by Matthew Rudd
Email ThisBlogThis!Share to TwitterShare to FacebookShare to Pinterest
2 exclamations of response 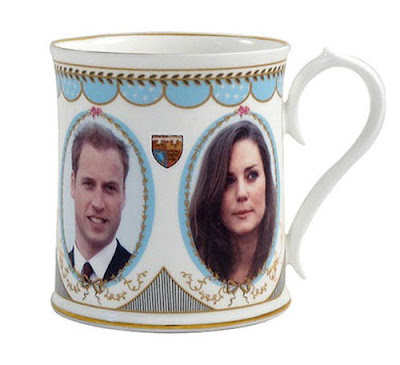 The blanket coverage of Prince William's engagement to Kate Middleton has, almost forcibly, prompted memories of his parents' wedding in 1981. The decision to give that iconic engagement ring to the future Queen Kate has, of course, jogged the memory even more.

I was eight years old when Charles and Diana got married. I remember, weirdly, more about the courtship (that teeth-chatteringly awkward interview, the commemorative crap we tried to make at school, a song that featured the line "Diana's gonna marry our Charlie boy") than I do the actual wedding - probably because come the day itself it was a sunny afternoon in East Yorkshire and the inhabitants of Lambert Park Road aged 13 and under were all on the street, playing.

When William started nursery school, some tossy hack wrote a piece for a tabloid offering opinions on who this four year old (that's *four* year old) should marry. Top of the list was Fifi Trixibelle Geldof. That worked out well, then.

The announcement yesterday has, as usual, brought out the mixture of soppy gag-tellers and whining cynics. Someone I know well used the word "parasite" when describing the princess-in-waiting - charming - while others have, not unreasonably, expressed concern about the cost of the wedding to the taxpayer during times of cuts.

The answer, for me, is simple. Get her dad to follow tradition and pay for it. He is a self-made millionaire and so he can afford it; he will regard it as his duty, irrespective of the groom's stock; and, most notably, he has the chance to be seen as a national hero for doing so. If he offered I'm almost certain the state would decline, so instead of offering he should insist - and he should get his daughter and future son-in-law to back him up.
Authored by Matthew Rudd
Email ThisBlogThis!Share to TwitterShare to FacebookShare to Pinterest
2 exclamations of response 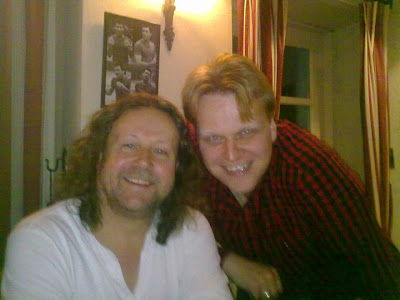 Alex and I on the latest Nerd Night. This was an especially enjoyable edition of our now traditional bi-monthly gathering of radio types in a different city in order to eat, drink and chew the fat off the industry.

We went to York, one of England's genuinely adorable cities. I only live 40 miles from the place and yet have been, in adulthood at least, very rarely. This was my first night on the tiles there for quite some time; I usually associate the place with daytime historical trips or the odd football match from my past career as a commentator.

The bulk of those attending gathered in a hotel on the A64 for the first of many alcoholic beverages, prior to a handy eight-seater minibus turning up to take us to our restaurant booking. There were 12 of us but we had one participant off the booze so he took his car, with three passengers, while the rest of us jumped in the bus.

The chap with the car, our pal Matthew Barton, is from Basingstoke and had never been to York in his life. Our taxi driver was, well, from a local taxi firm. But only one of these two drivers had trouble finding our restaurant, and it wasn't the Basingstoke chap. By the time we had dismounted, paid our four quid each and entered the restaurant, the other four had drinks in hand and were chatting to our remaining pals who were meeting us there.

Still, all settled down quickly in what turned out to be probably the best restaurant I've ever been to in England. I really mean this. It's called Plunkets, and you'll find it here. The hospitality was excellent, the seating comfortable, the room warm, the music dimmed and the food was both delicious and reasonably priced. I had a loaded skins starter with chilli con carne, followed by a lemon chicken dish with olive oil mash and seasonal vegetables. I couldn't have cooked it better myself. (No, I really couldn't have cooked it better myself).

Kudos and warm thanks to Ann Marie, a gorgeous York expert who gave us the heads up for the restaurant but, sadly, had to pull out of making the trip herself on the day.

Her absence meant that there were 17 of us in attendance, 16 of whom were men. The exception was Charlie Jordan, the former Radio 1 DJ still unjustifiably not featured on Radio Rewind and also a former poet laureate of Birmingham. I'm not sure whether she is planning a ditty on being in an enclosed room with 16 drunken blokes (especially as only a penchant for chocolate liquers prevents her from being entirely teetotal) but if she is, then it may end up being NSFW*.

As usual, the conversation was principally about the industry, with the latest updates from our own careers plus some ever-juicy gossip and terrific anecdotes from our pasts. Jules Bellerby, breakfast presenter for the local BBC station, was in attendance which, sadly for him, prompted me to remind him of my 19 year old self starting out as an irritant trainee at BBC Radio Humberside, where he was doing the drivetime shift ("Humberside Today, with Jules Bellerby") and would open his show with I Got You Babe by UB40 & Chrissie Hynde at least once a week.

The stories came thick and fast and at my table, as the lemon chicken slid down, I enjoyed hearing of the newsreader who turned up for work pissed and fell asleep in the office on arrival. The presenter faded him up at 6am, got no response and so went straight into a song before rushing up to the newsroom to find out what was happening.

He found the hack asleep in a chair. He shook him vigorously awake and shouted, angrily: "You idiot. You've just missed the six."

The journalist stirred, checked his watch and replied, with a yawn: "That means I've got an hour to the seven", before turning over and going back to sleep.

Then there was the presenter whose backtiming (we've all been bad at this) was regularly so off the mark that he would miss the pips and would therefore sing them himself. Instead of the impeccable, timeless beeps associated with flagship news bulletins, we got a human version of "bip, bip, bip, bip, bip. biiiiiiip", each a semitone or so different from the previous one.

The blog title relates to another tale. A presenter who somewhat lacking in familiarity with football still needed to read the scores during his show, but made the mistake of assuming the fixtures were read downwards rather than across. And there were only three matches on. Suddenly, we realised that Alex's long belief in "tri-team football" had an accidental sympathiser.

Upon the exit from the restaurant, we followed the owner's pointed finger towards our next planned port of call, a smart hotel bar which we had been told would be a) open until 2am, and b) not playing loud music. There is no point in people travelling from all over the country (London, Birmingham, Swindon, Basingstoke, Biddulph, as well as various Yorkshire spots) if they were then unable to partake in a conversation afterwards.

The pointed finger was all the restaurateur got wrong all evening. We found ourselves nowhere near where we needed to be but, fortunately, happened upon another hotel with the required accoutrements. Therefore, in we piled, much drink was taken (a bottle of Jack Daniels was certainly emptied) and we carried on. A highlight (I really should put that word in inverted commas) came when two of our brethren had a bet with each other, to the tune of a whole pound, as to which brand of amplifier was being used behind the bar. From their angle they could see the side of it but not the label on the front. I can't remember which brands they bet, nor what the actual brand was and which of them, if either, took the quid. So you'll just have to bite the back of your seat with anticipation for the rest of your life. Sorry.

Carriages at just gone 2am, back to the hotel and a comfy, if short, sleep before all met for lukewarm fry-ups and discussions about the weekend ahead. Those who had sensibly done a StreetView search for our hotel had noticed the McDonalds next door and had therefore not paid for a seven quid breakfast but promised themselves a sly McMuffin and milky coffee instead for five quid less. Then, one by one, we were off back to our own lives and careers once more.

When we went to Blackpool about a year ago, I overheard a lady's ecstatic groans in the room opposite mine and a buzzing noise that suggested a spot of, er, self-help was going on therein. Well, this time I received a tweet from one of our group claiming that a couple were doing rather loud naughties next door to his room, and a tape recording had been made, ready for use on the radio. Honestly, some people... (wonder if they have Listen Again?)

That's it for Nerd Night until the New Year. The radar is showing Norwich as the frontrunner for our next jaunt, though I'd be surprised if Norwich is on anyone's radar if my journeys there in the past are anything to go by...

*Not suitable for work, of course. Unless you work in muckiness.