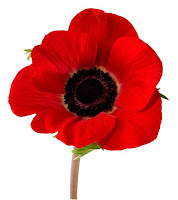 I took the dogs for an earlier than normal Sunday run because I wanted to be home for the Cenotaph ceremony.

My Sundays are odd; the club gig finishes at 4am, then I head straight back to do Sunday breakfast at work, so by the time I get home after 10am, I'm only thinking about hitting the sack. However, I wanted to observe the silence, so I passed the time between getting home and the mark of respect by taking the Bassets out.

Our regular walk takes us adjacent to the local playing fields, which contain three football pitches and an enclosed, tarmacked kids' playground. Dogs are disallowed through a local byelaw (and signposting on the field itself, though the lettering had been washed off over the years so it's now unreadable) from going on the field, along with horses, motorbikes and golfing equipment (and they'd probably ban the working classes if they could get away with it). However, the reality is that blind eyes are turned provided any mess is retrieved, and so we ventured on to the field.

I didn't expect to see a football match taking place. Two lads' teams were warming up and about to kick off. I looked at my watch - it was 10.30am. What about the silence? I'm not Garry Bushell, but I do find myself feeling rather alarmed that there is still an acute lack of awareness about Armistice Day, and as 11/11 happened to fall on the Sunday this year, there was even more reason to observe it than ever.

I didn't hang around to find out if the referee was due to stop the game at 11am and make the players and spectators stand motionless for two minutes. I carried on with the pack, and we got home at 10.45am. I ate, observed the silence, watched the Royals lay their wreaths, and went to bed.

The coach of the home team at this match was in our local on Sunday night, and I asked him. He said they observed a two minutes' silence prior to kick off, but couldn't change the kick off time because of the referee's schedule. My late grandfathers, both of whom mercifully came home from Africa unscathed in 1945, would have gone purple at this remark. Change the ref! Tell him him his schedule means nothing today! An extra half hour's inconvenience "caused" by the Armistice? I didn't push it though; it was their call and at least a silence was observed. I remember as a Sunday boys footballer in the 1980s we always delayed our kick off to just gone 11, and had the silence around the centre circle beforehand.

It was also notable that there was no silence at all at the professional football match I had attended the previous day, though I don't know whether that was replicated around the country or not and I don't pass judgment. I do hope that the current fad for swapping silences for applause in the case of a deceased ex-player etc isn't ever copied on Armistice Day though - that's when we know this piece of history has become a little too historic (though veterans of Korea, Ulster, the Falklands, two Gulf campaigns and the ex-Yugoslavia would argue otherwise).

And yes, I appreciate that I would have been silent at 11am had I just gone straight to bed as normal; I'd been awake for 26 hours and therefore deep sleep would have been achieved within seconds of hitting the pillow. But that's the wrong sort of silence; you had to be there, in mind and body.

Click here for the Royal British Legion.
Authored by Matthew Rudd
Email ThisBlogThis!Share to TwitterShare to FacebookShare to Pinterest
0 exclamations of response