A car park space for ambulances 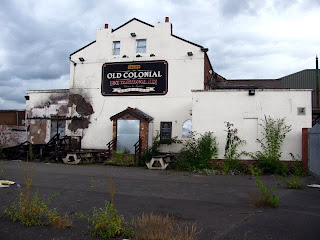 I'm working for Pure this week, which is always a joy, and at the moment there is a campaign on the station to find Stockport's Perfect Pub. Listeners are voting between two pubs a week and eventually we'll get to a final two and the accolade will be handed out.

I remember as an FHM reader when I was a thrusting twentysomething that the mag had a feature called The Lush, in which an unspecified number of the magazine's people visited a different UK town and took in five of the local bars and hostelries. If I recall rightly, they marked on the basis of convenience, welcoming of strangers, range of "strong lagers" to mix, the chance of a decent conversation and the likelihood of a beating. I lived in Huddersfield at the time, and they went to at least two bars whose doors I'd previously vowed not to darken again - and liked them. Maybe it was just me that night, then.

The worst pub I've ever frequented was in the Lowerhouses area of Huddersfield, one of the more dubious parts of the town. I drove through this estate every day to get to and from work, and there was one pub in the centre of the estate called the Masons Arms. I would never have visited in a thousand years but on this occasion, I had to because of work.

A well known (to the police) extended family lived on the Lowerhouses estate and were extremely notorious in the area. They were responsible for a number of burglaries, deceptions, thefts and the like, to the extent that the Local Intelligence Office at the police station, where I as a hack had to go each day to be given the overnight crimes, had photographs of every single member of this family on its wall, almost for decoration.

This family committed one crime on the Lowerhouses estate too many and local vigilantes decided to do something. The house the family squeezed into (we're talking a dozen adults here - a mum and dad, sons, daughters, nephews and nieces) was firebombed. The house itself didn't catch fire but those family members present were forced to flee.

As an agency hack, this had potential to do more than just trouble the local press and so we needed to find a way of flogging it to the nationals. So, a colleague and I were assigned to go and talk to the Lowerhouses locals and, of course, the best way to do this en masse was to head for the Masons Arms. we were given a bit of company petty cash in order to get a round in for willing talkers, and off we went.

Oh dear. This place was even more horrendous inside than even the grubby exterior could ever have made you imagine. However, it was evidently popular with the residents, and on the midweek evening we turned up, plenty were in. We got the inevitable "who the hell are you?" look when, as strangers, we walked through the door and ordered two pints of lager. But after ten minutes, we managed to get chatting.

We figured the best way to go about it was to be honest about who we were and what we wanted from the beginning, and this seemed to work. A round of ales later and a few tongues at the bar began to loosen. We didn't ask for names and didn't make notes; our best hope was to not look like journalists at all.

The goodwill lasted about half an hour, then gradually they began to turn on us. We quickly finished our drinks and did the classic hack's routine of making our excuses and leaving. I'm not especially brave in most situations, but I have to admit that throughout my time in that wretched tavern I was terrified. These were rough people and I doubt that they were especially law-abiding themselves, but we had gone in there to try to profit, in a way, from their desperation and anger and although for a while we got away with it, in the end they made it clear what they'd do if we didn't vacate.

The Masons Arms was undecorated, floorless, freezing and odorous. I look back now and wonder how the hell it maintained a licence and a safety certificate. The cracks in the furniture and the splinters sticking out of the pool cues suggested frequent punch ups. As we recalled what we were told in the office the next day, we knew we'd had a lucky escape.

We got bugger all in the papers and the Masons Arms closed down within weeks. I drove past it for two more years on my way to and from work and never saw it reopen. I wouldn't be surprised if it still stands there, crumbling and desolate, housing a thousand nasty memories for all those who unwittingly drank there.

To my knowledge, the extended family never changed their ways. I expect their mugshots are still on the police station walls to this day.
Authored by Matthew Rudd
Email ThisBlogThis!Share to TwitterShare to FacebookShare to Pinterest
0 exclamations of response

Still love it, and as ever, still questions worth asking...

1 - How come we got a reasonably good family in the Mortons and then saw all of them leave except the utterly hideous ex-wife?

2 - Is Natasha the hairdresser on a three month sabbatical?

3 - Why does Sean never mention his child?

4 - Why has Molly changed her ringtone from Molly Malone to a boring, standard double ring?

5 - How efficent must the Manchester justice system be to allow a murder trial to be set just a month after the accused was charge?

6 - Why have the Connor parents not wondered aloud if Carla was tupping Liam while still married to his brother?

7 - How does Ashley make a living by selling four lamb chops every week?

8 - Are we seriously meant to believe that the casting people at Granada looked at John Thomson and thought "yep, he'll pass for a 40 year old"?

9 - What happened to the burgeoning storyline about Bill paying Audrey her money back?

10 - Exactly when will Fizz be allowed to give Rosie the biggest lamping in soap opera history?
Authored by Matthew Rudd
Email ThisBlogThis!Share to TwitterShare to FacebookShare to Pinterest
4 exclamations of response