He wakes and says hello, turns on the breakfast show 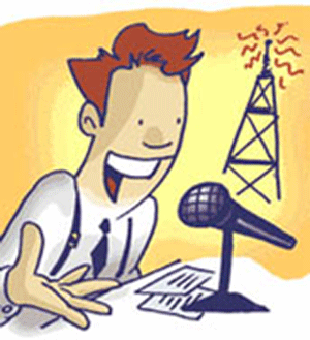 I had a free day marked on my calendar until a 5pm call came in on the Sunday evening asking me to cover a breakfast show as the regular host had been taken ill. Dutifully, I said yes and immediately prepared for an early night which, with the busy weekend I'd already had, would be easy to have anyway.

The show started at 6am, as ever, and it went well. One of those days where you think you've performed to a good standard, entertained and informed, without necessarily cooking on gas. It's quite hard to be at your absolute peak when you're in as a last minute stand-in but I was happy.

Before the show started, I advertised it on Facebook, as I often do. The regular host is a friend and colleague and so I linked to him in the status update I posted. Later, I randomly clicked on his name to look at his wall, expecting to see a stack of get well messages from his public.

I didn't get beyond the first thread, which made me smile and think at once. Someone had said good morning to him, clearly before they'd even turned on the radio. A second fan of his then said he wasn't there. Between the two of them they chatted on his wall bemoaning his absence - and then said they were going to retune.

They weren't critical of me, I should add immediately. And I was amused. So I posted a comment saying I wasn't offended by their decision to go elsewhere, complete with ample smilies to make it clear that was the case. There then followed any number of backtracking, grovelling, embarrassed messages from these two saying they wouldn't re-tune after all and they were sorry, and do I have a spade they could borrow to dig a hole for them to crawl into, etc.

Local radio gives you something of a profile but you are very much an anonymous minor figure, even when hosting a successful breakfast show. Trouble is, as these two proved, there is an assumption that you're not normal, not regular, not the same as them. Breakfast show hosts, or any local radio hosts for that matter, apparently don't feel knackered in the morning, have issues with family and finances and, of course, they never read Facebook. It never occurred to these two that the regular host and I would be Facebook friends, nor that I would therefore have the time or inclination to read their comments. It was as if they knew I existed, but not really. Not in their world, anyway.

How very strange it all was. But it did make me laugh.

Talking of local radio, that organ of esteem the Guardian has been reviewing breakfast shows recently in an effort to find what they would deem the best. Naturally, they've done exactly the thing that hacks me off more than anything else about the press attitude to radio, which is just look at stations based in London and then end the series there.

Most of the national stations, rightly, got reviewed (they didn't do the two classical stations), but then there was absolutely no justification in then reviewing (and, therefore, hugely plugging) Capital (London) and Heart (London), putting their breakfast gigs in the same category as the national shows, and then not doing likewise with the other Capital and Heart stations up and down the country, as well as the hundreds of other worthy local breakfast shows on offer.

I suspect they sussed this at the very last minute, and quickly they threw it open to their readership to "suggest" to them "unsung heroes" (God I hate that phrase) of local radio breakfast time. By "unsung hero" they mean "person on air outside of London whom I'm never going to hear". That rankles, especially as I could name a dozen and more breakfast presenters on non-southern brands that make Vaughan and Theakston look like shoddy beginners. Some breakfast show presenters on local stations are major, major stars of their patch and would attract a bigger crowd at appearances and events than a lot of equivalents on national stations.

Anyway, it seems that some of these great shows are going to be reviewed by the Guardian, which is at least something. It's just a pity that they didn't have the intelligence or decency to discover the worthiness of these programmes themselves and had to be shamed by their public into doing so.
Authored by Matthew Rudd
Email ThisBlogThis!Share to TwitterShare to FacebookShare to Pinterest
0 exclamations of response