A cracking club night on Christmas Eve, with punters of all ages turning up and not too many complaints about the music as I played a bit of everything from 60s Motown to modern RnB. You can't win though sometimes - stick on a Christmas song and someone moans I'm playing too many; stick on a dance anthem or some 80s pop and someone claims I have no festive spirit.

One of my regulars on a Saturday is a policewoman by day, but likes to revel like any member of the public who's had a hard time of it on shift during the week. Sadly, one of the punters recognised her - despite her snazzy dress and Santa hat - as the woman who'd banged him up a few weeks earlier and decided to have a pop. As an argument and threats brewed and her boyfriend tried to step in, I called for the doormen who promptly - and literally - threw the aggressor out of the building.

The song I was playing at the time? Happy Xmas (War Is Over).
Authored by Matthew Rudd
Email ThisBlogThis!Share to TwitterShare to FacebookShare to Pinterest
0 exclamations of response

How was it for me?

I'm sorry that some bloggers have had a bad year, judging by their festive posts. My 2008 has been very good, with work issues sorted and improved, the extension almost finished, my family sport of swimming restoring its reputation in Beijing and Hull City's promotion adding a period of sheer euphoria which we're still feeling round these parts. The club's new-found role as the saviours of English football (not an exaggeration) also pleases me greatly.

It's not been all great, of course. Charlie Smith's death saddened me but his longevity and amazing life achievements will always neutralise the sense of loss. My road accident at Easter will give me nightmares for a while to come yet. And there was the death of my neighbour. We didn't get on with him at all, but that doesn't stop me thinking of his family at this time of year

2008 also brought about the first anniversary of this blog, a date I never believed for a moment I'd reach. That's thanks to you for maintaining a level of interest which makes writing this guff always a pleasure.

Kind regards and merry Christmas.
Authored by Matthew Rudd
Email ThisBlogThis!Share to TwitterShare to FacebookShare to Pinterest
2 exclamations of response 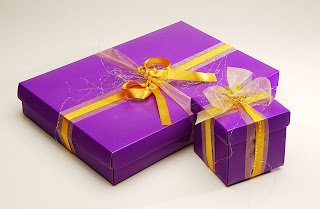 The NB wrapped up all our presents yesterday. I occasionally held ribbons down with one finger while she applied the sellotape (TM) while otherwise feeling entirely useless.

This is because I'm appalling at wrapping presents. When I try, I end up ripping the paper or not quite cutting enough from the sheet to cover the present entirely. Therefore I end up tearing an extra bit to stick over the gap, making it look all unwieldy, inconsistent and appalling.

One year I hit upon an idea. I took my unwrapped Christmas shopping to work with me, plus all the wrapping accessories required - paper, labels, ribbons etc - and then made an on-air appeal on my Imagine FM breakfast show for someone who was a) available, and b) kindly, to pop round our studios and wrap my presents for me. It worked a treat, as half a dozen women in their 30s and 40s popped round over the next half hour to offer their creative skills. Within another half hour, I was driving home with a bagful of immaculately wrapped presents.

Boy did I get some playful stick for this. But I'd do it again...
Authored by Matthew Rudd
Email ThisBlogThis!Share to TwitterShare to FacebookShare to Pinterest
1 exclamations of response

"Like Bisto gravy, you saved the best for last!" 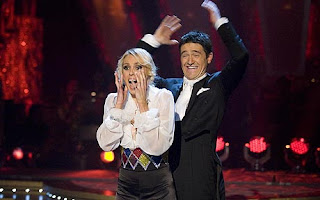 Strictly Come Dancing is over and I warmed to Tom at the last minute, especially after Rachel's showdance proved to be such a typically tedious effort. I got numerous texts while it was all going on because I was driving to Stockport at the time and had it on the Sky+ for when I got home. Lisa shouldn't have gone out when she did - not after getting 80 out of 80 - but Tom's showdance was exceptional and he was worthy as a winner.

The highs and lows of the series then...

1 - Arlene Phillips' utter witlessness
2 - That partner of Cherie spitting his dummy out over John quitting
3 - The over-celebbed studio audience, many of whom craned their necks to be seen; would they be bothered if it wasn't on television?
4 - Bruce Forsyth's performance on finals night
5 - The voting controversies and on-air apologies, just to try to prevent the Daily Mail from sticking the knife further in
6 - Rachel's utter lack of personality or charisma
7 - The assumption that the whole country knows where Lisa is on the radio every morning
8 - Len Goodman claiming the Austin/Erin paso lacked content
9 - The bullying of John
10 - Crocodile tears upon exiting - if you're going to "miss" dancing so much, then you could always take it up as a hobby, y'know...
Authored by Matthew Rudd
Email ThisBlogThis!Share to TwitterShare to FacebookShare to Pinterest
6 exclamations of response

Christmas songs are a nightmare for me, as a club jock. At this time of year I'm asked by fifty per cent of the punters to play loads of them, while the other half I could confidently say absolutely hate them and make it plain that they do. So it's lose-lose for me.

Another problem is that with few exceptions, they're really hard to dance to. Do you want to sing loudly or dance wildly? Again it's lose-lose for me - put on an undanceable Christmas song and the dancers complain they can't move to it; leave out the undanceable songs and the festive fetishists moan that they can't sing along.

Phil Spector's album is the bane of my life at this time of year. The songs are wonderful, the production fantastic, but only when you put them on in a club, at some persuasive woman's intoxicated behest, do you realise that a) the sound quality doesn't carry into sophisticated amps; b) you can't dance to any of them; and c) nobody knows the words. That's lose-lose-lose.

Then there are the depressing Christmas songs. I'm forever amazed that radio stations play the records by Band Aid (any incarnation), Mud and numerous others. Christmas may, yes, have messages and meanings and it is about thinking of your fellow man and the more unfortunate, but people lucky enough to have fun at Christmas shouldn't be made to feel guilty.

The only truly danceable songs are the ones by Mariah Carey and Shakin' Stevens, neither of which are much better than hideous when played really loudly. I'll be glad when it's over.
Authored by Matthew Rudd
Email ThisBlogThis!Share to TwitterShare to FacebookShare to Pinterest
6 exclamations of response