"Shout it out with a megaphone!"

In no particular order then - ten songs by Stock, Aitken and Waterman which were really rather good, actually...

1 - Never Gonna Give You Up by Rick Astley

2 - Especially For You by Kylie Minogue & Jason Donovan

3 - Happenin' All Over Again by Lonnie Gordon

4 - Say I'm Your Number One by Princess

6 - I Just Don't Have The Heart by Cliff Richard

7 - This Time I Know It's For Real by Donna Summer

8 - When You Come Back To Me by Jason Donovan

10 - Better The Devil You Know by Kylie Minogue***

*Yes, this is irrespective of the deadbeats who recorded it, thanks.
**I can never remember where the brackets go on this, so I've left them out entirely.
***But also see any single from Kylie's second or third albums, really.
Authored by Matthew Rudd
Email ThisBlogThis!Share to TwitterShare to FacebookShare to Pinterest
5 exclamations of response

It was the first time this season, and under Sven Goran Eriksson, that they have dropped points at home.

And it was in their tenth game there. Considering the wretchedness of Manchester City's form in the top flight for pretty much 30 years (lest we forget they've dropped down from the top flight a few times too during that period), this was a magnificent achievement. The run had to end, but it was against a good side and at least they didn't lose.

Which makes the supporters who chose to boo the team at the final whistle the biggest set of morons this season has seen so far.

Sale now on here too, so wake up you lazy gets 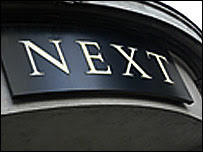 Further to the PC World early sale, the Natural Blonde informs me that Next started their sales at 5am on Boxing Day, a whole two hours earlier. 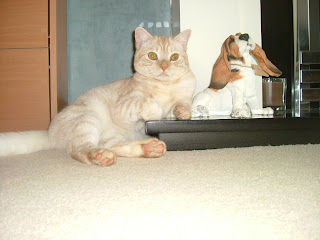 Here's Sidney, our youngest cat, and his new best friend - one of the two model Basset hounds we have on our fireplace.

I think we need a pet psychologist.
Authored by Matthew Rudd
Email ThisBlogThis!Share to TwitterShare to FacebookShare to Pinterest
1 exclamations of response

I'm sure some of our biggest retailers are trying to win a place in the Guinness Book of Records for the earliest-commencing "January" sale.

The inverted commas are there for a reason. The very idea of some shop re-opening to flog its unsold Christmas gear on as tardy a date as January 2nd is laughable now.

It eventually became December 27th, and now it's Boxing Day for many stores.

I personally would rather spend Boxing Day watching Hull City win again (which they did - hazah) and then having a roast dinner with my parents (which I did - delicious). But if charging around shops purchasing stuff which was 60% more expensive two days earlier (and don't they love smugly pointing that out) is your bag for the day after Christmas, you go for it.

The biscuit has been re-taken this year, and the descendents of the McWhirter twins may well have to update their hallowed pages if the TV adverts I have observed are correct.

It begs one question:

Who the hell is foolish enough to be queuing outside their local PC World at 7am on Boxing Day?

The only reason I'm ever not in bed at 7am is for work reasons. Otherwise our bodies should be programmed to be very much under a duvet, in a deep state of unconsciousness, and dreaming about Karen Hardy off of Strictly Come Dancing and some faulty strapping on her frock.

Though that's a personal thing, admittedly.

These people who prefer to be outside bloody PC World at that time deserve to be in homes for the bewildered.

No high-quality, low-price Pentium Processor is that important, surely?
Authored by Matthew Rudd
Email ThisBlogThis!Share to TwitterShare to FacebookShare to Pinterest
2 exclamations of response

Some of my fellow bloggers seem to think that blogging is not an option over Christmas, so they've all posted seasonal messages of good cheer and added that they'll be back in January.

Maybe they've got better things to do.

I, however, intend to do more scattergun writing through Christmas, just in case some poor sod actually comes to this blog through the holiday period to check for updates. And because I like doing it.

That said, it might not be for a while, so this is my disclaiming post, just in case...

Merry Christmas! And thank you for your support so far for this blog's short, but ever-lengthening, life.

Have a great day.

PS - I'm on KCFM breakfast on Christmas Day, and doing a party show in the evening....
Authored by Matthew Rudd
Email ThisBlogThis!Share to TwitterShare to FacebookShare to Pinterest
1 exclamations of response