"Goals pay the rent, and Keegan does his share!"

Kevin Keegan's return to the pantomime of Newcastle United will, in the minds of those not garbed in black and white, be a disaster. I've no sympathy for Newcastle United or their deluded, ludicrous supporters, but I have plenty for Keegan.

Along comes Mike Ashley with an offer to become manager (but only after Harry Redknapp said no) again and Keegan, typically for a man known to let his heart rule his head, accepted.

His barking mad managerial career now has yet another delicious, tabloid-friendly twist and it won't be dull. But I wish he'd never become a manager, even though on the motivational side he's always been rather good at it.

Put simply - Keegan was a fantastic player and now barely a soul cares about it. Captain of England, 50-odd caps, twice European Footballer of the Year, winner of almost every domestic honour with Liverpool, the first high-profile Englishman to make a foreign pilgrimage in order to better himself, icon of Newcastle's promotion in the mid-80s. He was quick, brave, forever seeking to improve, loyal, honest, dignified, intelligent and tri-lingual. And now, thanks to his mad career in management, hardly anyone knows or remembers that.
Authored by Matthew Rudd
Email ThisBlogThis!Share to TwitterShare to FacebookShare to Pinterest
4 exclamations of response

Supermarket shopping is one of those necessary evils, and last night the Natural Blonde and I traipsed around our local Asda getting a couple of months' worth of stuff.

The cupboards were bare, so we could put it off no longer; but there is a sense of dread and fatigue when the prospect of the supermarket trip is ahead.

I try my best to get out of it. I try to broker a deal - I'll walk the dogs and get the tea on while she fetches the stuff. That has worked in the past, but not this time. The Natural Blonde did the dog walking while I was at work and then collected me from the studios to head round the corner.

I don't even mind doing it when I'm alone. I can make a shopping list and fetch the stuff. But she's never quite pleased with me for taking the initiative - either I get the wrong stuff, the wrong brand or I pack it wrongly or something. It's one of the occasions where I seriously am under the thumb.

So, off we went. Asda are annoying me at the moment - we did an online shop there once (once!) last year when both of us were both busy and unwell, and they have sent me a spam email about deals, insurance or their financial services every single day since, despite my clicking on those 'unsubscribe' links. But I was tired and wanted it over with, so towards the big green and white sign we went.

And, though it's a long way round the store, it was more painless an experience than normal. There is a mild form of tepid sport to be had from observing other shoppers too - it's a way of passing the time while leaning on the trolley and guarding the Natural Blonde's handbag while she takes ten minutes to decide which brand of sweet and sour sauce is required. And I feel rarely more self-conscious than when I have a trolley full of shopping and masses of frozen stuff is on top, so it's good for the gander...

Two girls passed us, pushing a trolley with one of those built-in baby seats, though there was no baby. However, evidently a baby played some part in at least one of their lives, as there was a supply of nappies within the trolley which could have encased the buttocks of the five thousand. They also seemed to have an enormous amount of frozen cauliflower. The baby seat was housing their mobiles, both of which were set to mp3 mode so they had a stereo version of whatever piece of inspid RnB they'd selected. They were singing along too - and here was me wondering what was wrong with "Africa" by Toto which Asda FM was merrily playing on the speakers...

And I say "girls" advisedly, as the Natural Blonde, having elected which sauce we needed, walked towards me, placed the bottle in the trolley and said: "Is it me, or were they both about twelve?"

A mother and daughter also emerged on our radar. These two were clearly a little more "middle class", and from the eavesdropping I managed to carry out while examining my fingernails, there was a whispered but semi-heated debate about washing-up liquid going on. The daughter had just moved into her first home and had run out; she was unable to find the brand she wanted and started to complain slightly too loudly that she doesn't like change ("I like what I like!"), prior to a dedicated open 'n' sniff session involving every available brand of the stuff on the shelves and a frequent upward movement of the nose in response.

Now I don't have any great knowledge of the washing-up liquid market, but from my angle of view there was plenty on the shelves. There was Fairy in its various flavoured forms, the Persil options (evoking memories of Robbie Coltrane washing his motorbike) Sunlight, Morning Fresh (or whatever it's called now) plus the many thousands of own-brand choices. Presumably all of these are reasonably adept at getting food markings and saliva off crockery and cutlery, yet this pair were having a semi-intellectual debate about whether any of them were any good at all because the one brand which apparently was the Emperor of liquids seemed to be absent from display. Honestly, if it wasn't so funny it'd be tragic.

It was the daughter who was most forceful in her views - the mother's main contribution was her assertion that Fairy made her hands go "scaly". Nanette Newman would turn in her grave if she were not still alive and well.

At times like this, I'd tell my kids to save up for a dishwasher. And even though she's now a homeowner, how come this lass needed her mum with her when all she wanted was washing-up liquid? Crikey, what will she be like when she runs out of bog roll? I have an image of her sitting on the thunderbox, stranded, as she dials her parents' number on her mobile...

It was 9pm by the time we headed for checkout and the store was quiet, so we didn't have to queue. "Would you like help with your packing?" asked the girl behind the till as we heaved two (yes, two - a big trolley and a mini-trolley, which we needed for the cleaning stuff, as the under-sink cupboard only contained cat food; lucky I had two pound coins in my pocket) trolleys towards her. Well, yes, but when offered I always have this masculine need to decline, and prove I can pack carrier bags with stuff adequately and maybe even competently. So the Natural Blonde shifted the stuff from trolley to conveyor belt and I then put it in the bags, and somehow we managed this without a) arguing; b) being pitied by a passing packer with a "Hi, I'm Derek!" badge who stopped to assist; and c) running out of room until one of the trolleys became available to put the packed bags in.

Eventually, we arrived home and loaded this stuff into the house. Unpacking shopping and consequently scattering carrier bags around the kitchen floor is always an interesting experience when you have five cats loitering. Oliver got stuck in a bag; Sidney picked up the Airwick and tried to hide behind the fridge with it; Harvey, ever the cautious type, watched from a distance, occasionally jumping out of his skin when a tin of soup or rice pudding hit the lino at pace.

The Natural Blonde does insist on putting the stuff away alone - makes me sound horribly disorganised and unreliable, that - so my only role is to put two newly-bought pizzas in the oven ("we'll have those because I can't get them in the freezer") and take the stuff intended for the bathroom upstairs. Then, at last, it's over for another couple of months...

I'd do online shopping more often, but the spam is incessant irrespective of which store you choose. Also, there is that restriction on what is available to deliver and what isn't and that irritating habit shops have of replacing items they can't find with ones they think you'd like instead. Once we got a bag of satsumas because the store in question didn't have heavy-duty black binbags available. I think they saw the word "bag" and made a snap decision...

We're well stocked now. A happy shopper is one who doesn't have to do it very often.
Authored by Matthew Rudd
Email ThisBlogThis!Share to TwitterShare to FacebookShare to Pinterest
4 exclamations of response 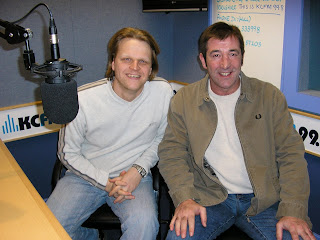 Sorry to be a mite gratuitous, but this is me and Billy Whitehurst, cult hero of Hull City and one of football's most notorious and tough professionals.

He guested on SportsCall last night, and a podcast of the interview will soon be available.

And he was a gent too. Full of great stories and feted by the other City fans who work here - they came in especially to meet the great man and he happily posed for pictures with each of them.

Even if you're not a footballist, type the name of Billy Whitehurst into Google when you have a moment today and read some of the stories associated with his name. Can't always guarantee absolute accuracy, but can always guarantee entertainment...

That's 22 stars of the Tigers' past players I've now interviewed since August. I'm like a kid let loose in a sweet shop.

*Graffiti in large black lettering daubed on the North Stand of Boothferry Park (along with Welcome Back Big Billy) when Whitehurst re-signed for Hull City in 1988. He reckoned the chairman was behind it!
Authored by Matthew Rudd
Email ThisBlogThis!Share to TwitterShare to FacebookShare to Pinterest
0 exclamations of response