Dress in white, one said with quotations

Do you remember the teenage house parties you used to go to? From the age of about 13 or 14, the liberated parents of someone in your class or year would allow their child their first semi-adult run of the house, and a load of people of the same age, plus a few above and a few below, would turn up, with ale.

The first I recall was when I was 13 and I went to Diane Rudd's place - she's mentioned (and photographed) on the school reunion post and is no relation. It must have been her birthday, so there we were, at her bungalow in 1987, drinking beer and playing daft yet harmless teenage games in shiny clothing while Male Stripper by Man 2 Man meet Man Parrish played over and over again, because Diane liked it. 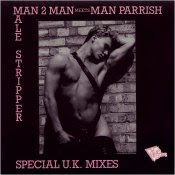 Chloe Hoskins had great parties, as she lived in a large detached house with some land around it, so she'd organise something in the summer and we'd spend most of the evening outside. Numerous 'awakenings' occurred, I would wager *cough*, in the trees and bushes within the immediate vicinity. I remember Rebecca Isherwood quietly singing When Love Breaks Down by Prefab Sprout in one corner of the garden, while in another area Matt Leach and Gina Hayton discussed Status Quo. We were all 15 or so, remember...

Of course, teenagers of every generation use these coming-of-age events to test how well or otherwise they could drink alcohol. I could take a four pack of lager, swiped with permission and a minor warning from my dad from his supply, and make it last all night. Invariably, some people - and it was almost always the girls - would try to down as much vodka as they could as quickly as possible and then spend the evening with their face pointing towards a washing-up bowl while the one wholly sober, churchgoing member of the group cleaned up after them. Getting drunk can be fun; but when it goes awry, it feels even worse when you're 15 than it does at 35. And often it was the youngest person there who turned out like this, invited at the age of 12 and yet in everyday life someone who acted 15. Yes, I know both remain minors at either age, but compare the 12 year old you to the 15 year old you and list the differences, because there'll be plenty.

These parties kept going until the age of 16 when half this group left school and went off to college or jobs. I stayed in sixth form, where organised parties at specific venues became the norm and there were people employed by the venue to do the chaperone stuff, so it never got too out of hand. I'm pleased to say that although I embarrassed myself at student parties after the age of 18, I never managed to do so too appallingly at these growing-up parties. Maybe I should have done; maybe that was the maturing that the parties were meant to inspire. I drank lager - slowly - talked to my friends, maybe danced a bit, wished I had the charisma to make Vicky Thackeray interested in me, and watched the carnage unfold.

I only hosted one myself; it was for my 15th birthday in 1988. My brother was swotting for A levels so my mum sent him to his mate's for the night, while she and my dad went out for the evening and, knowing how important an event this was, gave themselves a midnight return time. The only rule was that my 30 or so teenaged guests were barred from upstairs except for reasons of using the lavatory, and I managed to keep this rule. The only other thing I remember was being called by the girl I was seeing at the time - she was at boarding school at the other side of Hull - and being wished happy birthday, followed by being dumped.

I responded to this piece of dreadful news by drinking lager, maybe dancing a bit and wishing I had the charisma to make Vicky Thackeray interested in me...

The memories are clear and since leaving my teenage years, I can starkly assign the beginning of my adolescence to the first of these parties. I can also say I enjoyed them, which is not something one can attribute to every aspect of the period between 13 and 18.

I saw Vicky Thackeray not long back. She looks well.
Authored by Matthew Rudd
Email ThisBlogThis!Share to TwitterShare to FacebookShare to Pinterest
3 exclamations of response

"But we invented it!"

We didn't learn from last year, clearly. At the semi-final stage of the Champions League, there were three English clubs plus AC Milan. Immediately, the pundits on TV, radio and in the papers all began to predict which club was going to win.

Nobody picked out AC Milan.

This year, it's three more English clubs plus Barcelona. Fans of the three English clubs, plus last night's rollcall of severe coaching failure (Wilkins, Hoddle and Souness) on Sky's punditry stools, all began to predict victories for Chelsea, or Manchester United, or Liverpool.

No mention of Barcelona.

English football may bask in the glory of the most progress within the Champions League, but ultimately the club which grasps that trophy is the one that matters. And although Manchester United have a better chance against Barcelona than Liverpool or Chelsea would, ultimately the Spanish giants are the team to beat.

Only two teams from England have won the competition since it became the Champions League, and each relied on considerable luck to do so. I fear that despite the progress of four to the quarter finals and three to the semis, ultimately none will again progress to the winners' podium.

(I hope I'm wrong by the way, although only Manchester United are actually worthy of the title).
Authored by Matthew Rudd
Email ThisBlogThis!Share to TwitterShare to FacebookShare to Pinterest
1 exclamations of response

I've known for years now that EastEnders is utter garbage, and has been since they did unnecessary things to the sexual chemistry between Shane Richie and Jessie Wallace. But the Natural Blonde still insists on watching it.

Fortunately for me, I'm on the radio whenever it's on. However, I accidentally caught last night's episode as I was dozing on the settee with two cats sitting on me when the NB, who'd been to the theatre, flicked on the Sky+ late at night to watch it.

I kept my eyes closed and my brain in snooze mode as much as I could. However, even my semi-conscious state could suss out that a) Steve McFadden should have gone on to better stuff years ago; and b) Patsy Palmer is really quite brilliant and could prove something of a saviour. I even liked that Jackson Five trailer she and her kids did.

It seems to be the only way to save EastEnders, as they seem incapable of developing new characters. The last decent newbies were the Slaters, and most of them soon buggered off. Ian, Pat, Peggy, Phil and Dot are acting as salvagers, so bringing back old standards like Bianca (and Ricky) seems to be as good a plan as they could have had.
Authored by Matthew Rudd
Email ThisBlogThis!Share to TwitterShare to FacebookShare to Pinterest
3 exclamations of response

When in Rome, pay sod all

My parents are flying to Rome later this week to see some friends who've just moved out there.

That's four quid each, but crikey, that's insane, isn't it?

Meanwhile, my pal Alex is planning another month-long jaunt in an open-top car around the States. He did it last year - you really should spend a couple of hours reading this magnificent blog on the subject - and has decided to do another, albeit on a slightly different route.

He too has acquired dirt cheap flights.

I have never booked a foreign trip of any description in my life. When I was single in the 1990s, I was on such a dreadful salary as an agency journalist that when I did take annual leave I simply packed a couple of bags and headed back to my mum and dads to be lazy. At a push, I managed five days in Devon at my brother's, kipping on his spare room floor, paying only for the train fare.

Since 1998, I have worked entirely freelance, and therefore have never had any paid holiday from work. I could have probably managed a proper break had I been given this privilege, but radio presenters are all freelance and therefore the ones I worked with who took proper holidays did so because a) they had partners or spouses with a decent salary to cover the double financial loss; b) they earned a fortune (which does account for some of them); or c) they were happy to go on the never-never and deal with the debt later (which applies to a good deal more).

So where have I been? France, a lot. My parents have a house there, so the accommodation is free on arrival. We are also good enough customers with North Sea Ferries (which also happens to be on our doorstep - I feel for everyone who has to get off a ferry in Hull at 8.15am and negotiate their way through an appalling rush hour; we go the other way to get home) to get smart deals with them when we travel. Therefore finance is less of an issue between the two of us.

We went to Egypt on our honeymoon, which was great. Even then, a percentage of the cost was funded by our wedding guests, from whom we requested Thomas Cook vouchers.

After that, nowhere else. Not since 1996 anyway. In that year, the skint 23 year old me got a freebie to Turkey with my parents for a week. That also happened to be my first ever flight; kids I was at school with were going to Spain in the summer from Manchester Airport, whereas all our family holidays abroad were by coach.

I still can't believe we endured trips to southern France and bits of Spain on coaches. I couldn't sleep on them conventionally; the only way I could get some shuteye on these 36 hour journeys was to kneel on the floor and rest my head on the seat. I actually slept properly like this, to the relief of my knackered parents. The heat and the boredom really took their toll on those journeys. I also remember being rather disappointed to learn that I'd missed all of Paris by being asleep (though it was 3am when the driver took us through; I'd be surprised if anyone saw Paris except for him).

I also had two trips to Holland as a kid by coach, for football exchange trips. This confused me no end, as we lived in Hull, which had an overnight ferry to Rotterdam, yet it was cheaper for the team to bus it all the way down to Dover, cross the Channel, then go from Calais through all of Belgium and into the Netherlands that way.

I'm almost 35 and I've never a) travelled abroad alone; or b) booked a trip off my own bat. Now that I know you can fly to Europe for less than a couple of pints and to the States for little more than it costs to service a car, maybe I'll change that. Any recommendations?
Authored by Matthew Rudd
Email ThisBlogThis!Share to TwitterShare to FacebookShare to Pinterest
2 exclamations of response