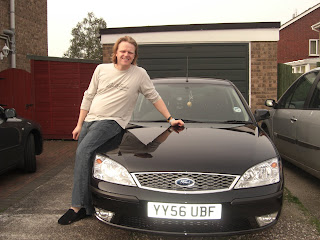 Thank you to everyone here for their tremendous work.

Lest we forget, on Easter Sunday the car looked like this...
Authored by Matthew Rudd
Email ThisBlogThis!Share to TwitterShare to FacebookShare to Pinterest
0 exclamations of response

I'm reading Anfield Iron at the moment, the autobiography of Tommy Smith, arguably the hardest Englishman ever to play professional football.

I'm roughly midway through what is a great footballing tale - Smith is just furnishing us with the players' reaction when Bill Shankly, the immortally brilliant manager, announced his retirement in 1974.

However, there are two issues I have so far with it.

Firstly, it does make me despair when footballers from that era bleat about the riches players earn today. It's not anyone's fault when you are born and what talent you are born with. There is some form of benign parlour game to be had by picking up an autobiography of a player from the 60s and 70s and guessing, before opening the book, how many pages it would take before today's "spoilt" stars and their fortunes would be mentioned in a jealous tone.

Smith makes comparisons a lot, and the older era - surprise, surprise - always wins. He isn't as bad as Archie Gemmill though, who as I recall from a When Saturday Comes review was having a right good whine about the trappings of today - always in list form, they are; "camera phones, iPods, flash cars" etc etc - within the first couple of pages of his book, which I haven't read. Today's players may have an unlovely element, but they earn what they earn because the game is rich enough and committed enough to pay it.

Secondly, I am mildly uncomfortable with some of Smith's revelations about Emlyn Hughes. It's never been a secret in football that the two did not like each other, but Smith goes into detail about various unsavoury incidents involving deceit, money, ego and attitude. They may be true, but as Hughes is now long deceased I can't help but think that Smith could have told these tales earlier to allow Hughes to defend himself. If his family didn't know about these incidents they would now be most upset.

Only knowing the public persona Hughes displayed after he stopped playing, I find myself believing Smith in all he says, but maybe he just shouldn't have said it. I won't go into detail for spoiler purposes (and also it defeats my argument that Smith should have kept quiet if I then repeat it all), but Hughes - so far at least - is the only person this uncompromising fellow has vitriol for; and lots of it.

Although the Hughes issues dominate the section of the book I'm currently reading, it shouldn't put any football fan off. It's great. Can't wait for the 1977 European Cup final ...
Authored by Matthew Rudd
Email ThisBlogThis!Share to TwitterShare to FacebookShare to Pinterest
1 exclamations of response

Did the 70s Night on KCFM tonight, so here's what you heard/missed...

They make the rocking world go round

Interesting one, this. At the nightclub on Saturday I was pleased to see the return of an old regular who'd not been in for a while. As it was early and quiet and I'd just put on a song and got the next one cued up, I nipped down to where she was standing and gave her a hug to welcome her back.

I asked where she'd been.

The instant reaction of a man when a woman says she's fat - and when it isn't immediately obvious that she is indeed dodging salad like there's no tomorrow - is to have a look, even though it isn't especially subtle. So I did.

"Oh, don't!", she said, mock-awkwardly but with a smile, half-heartedly trying to pull her unbuttoned jacket across.

My instant reaction was to reassure her. She wasn't fat at all. I told her, in as uncontroversial a manner as I could (bearing in mind the final chorus of Sunny had just started and I was running out of time) that she looked fabulous. Which she did.

She wasn't having it.

She used to come with her sister, who'd not been in for even longer. I asked why.

These sisters were late 30s or early 40s and in their prime. They looked great to me. I hurried back to the CD players, confused and a little disappointed.

I've always believed that women lose weight because they believe men like skinny girls. Maybe I'm flattering mankind generally here, as on reflection they may do it to make unskinny girls jealous. Most men I know will always prefer a woman with hips, a discernible waist, a proper bosom and a sunny disposition to go with the figure. Skinny means worried, paranoid, competitive and almost certainly bitchy.

This club regular doesn't need or want my approval, but sometimes I wish women would let men do the reassuring and listen to them, even if they sense an ulterior motive. She's single and looking, and she's more likely to stay that way if she continues to believe she's fat and needs to shed it.

I really hope she doesn't lose weight, and gets her sister back on the dancefloor with her soon. I'll even make sure I don't play the Weather Girls when they turn up.
Authored by Matthew Rudd
Email ThisBlogThis!Share to TwitterShare to FacebookShare to Pinterest
0 exclamations of response

Premier League? We're not having a laugh...

Hull City will be promoted to the Premier League next week if we win and Stoke lose.

Gulp. Wish us luck...
Authored by Matthew Rudd
Email ThisBlogThis!Share to TwitterShare to FacebookShare to Pinterest
2 exclamations of response