Watford v Hull City, a seriously important play-off semi-final first leg which people would like to attend, kicks off at midday on Sunday.

This means it is an actual physical impossibility for supporters from Hull to get there by public transport - unless they travel the day before and spend more money on accommodation.

I hate the football authorities. They haven't a clue. They really haven't.

I'm driving, by the way...
Authored by Matthew Rudd
Email ThisBlogThis!Share to TwitterShare to FacebookShare to Pinterest
0 exclamations of response 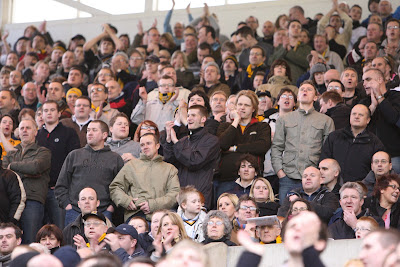 Unlike the team followed by the triumphant Bright Ambassador (for whom I'm very pleased as his club is one that's easier to like), Hull City didn't quite snatch automatic promotion on the last day.

The play-offs beckon then.

At this point, I would like to say that Stoke City in the Premier League will prove the biggest sporting mismatch in the history of all things competitive. You may as well ask Stephen Hendry to play my five year old nephew at snooker - and give Hendry a 100-point start.

Right, on with the important stuff...

Hull City have played 46 games this season (50 including the two Cups) and I've attended every single one of them. This is a first for me - one of those footballing ambitions that a lot of fans have, like visiting every ground in the country. I'm 20 or so off from that particular milestone, but to complete a full season as a supporter is something of which I allow myself a little pride.

Like a budget version of this blog - where did my travels take me?

LOCAL/REGIONAL - four grounds in total, not least the return (briefly) to our level of SCUNTHORPE UNITED, a team which thinks it has a right to believe we give a stuff about them. We went to the corrugated nu-stadium that is Glanford Park in November for a midday kick off and won 2-1. In South Yorkshire we had a mixed time, losing appallingly at SHEFFIELD WEDNESDAY in September and with significant ineptitude at SHEFFIELD UNITED in April (our automatic promotion advantage went that day, with two games left) but, four days prior to that collapse, won 3-1 at BARNSLEY on the telly.

NORTH WEST - Do we count STOKE CITY in this? We went there on New Year's Day and got a 1-1 draw, and their fans even managed to not beat each other up or throw coins at us, which happened at each of our last two visits. Previously we'd had a bad defeat 2-1 on telly at BLACKPOOL where we lost to a goal in the 100th minute, and then an awful, awful 3-0 pasting at PRESTON NORTH END, who always do us at theirs. In between, we beat BURNLEY on a cold Tuesday night with a 93rd minute winner (pictured) having spent pre-match quaffing the cheapest beer in football. Ace.

MIDLANDS - We had a good season when visiting these parts. Played four, won three - at WOLVERHAMPTON WANDERERS on a Tuesday night in September and even more enjoyably, at WEST BROMWICH ALBION in February, which marked the beginning of a unanimous belief that we could go up. The photo at the top includes me doing a spot of worrying during the game. We also did LEICESTER CITY 2-0 at theirs - they were terrible and deserved their relegation - while getting a 1-1 draw at COVENTRY CITY in our first away game of the season. 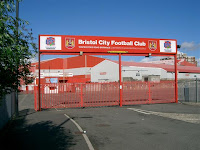 FURTHER WEST - Not great. We lost, semi-significantly, at BRISTOL CITY in March and then failed to perform at CARDIFF CITY on a Tuesday night 11 days later, losing 1-0. Still, at least we were a big enough draw for Cardiff to pack out their stadium. I'm sure it had nothing to do with fairweather fans needing a voucher from the game to get a ticket for their FA Cup semi final at Wembley. Oh no.

SOUTH COAST - It's a bloody long way to SOUTHAMPTON at the best of times, but to lose there 4-0 makes it an even longer trek back. It befell us in the same week as the defeat at Preston, therefore allowing us our week of doom in an otherwise spellbinding season. St Mary's is the only venue where I have to leave before the final whistle due to the train times and the running (not walking!) distance between stadium and station. I missed nothing in doing so this year. Meanwhile, we got a scrappy but merited win at PLYMOUTH ARGYLE in February, scene of my attempt to boycott motorway services after a previous visit there in the FA Cup left me with a national debt.

EAST - Three clubs here, then. We drove for two and a half hours to COLCHESTER UNITED in January, only for the game to be postponed due to waterlogging; news of which came to us just as we passed the sign saying "Welcome to Colchester" - yes, anyone is who wants it. Angry, we spun the car round and drove home again. The rearranged game, on a Tuesday night in March, resulted in a comfortable 3-1 win. The visit to NORWICH CITY was fantastic, full-to-bursting, atmospheric - and made that much longer by the fog, but we got a good 1-1 draw. IPSWICH TOWN was our last day yesterday, with our destiny not in our hands to begin with but removed forever when the home team scored and Stoke contrived not to lose. Ah well, I've always loved the play-offs.

LONDON - We've not won a League game in London for nine years, I found out this morning. This is made all the more remarkable a stat by the fact we've been in three divisions over those nine years so have played a sizeable chunk of the London teams, with the exception of the obvious biggies. Anyway, this season we lost gutlessly at QUEENS PARK RANGERS in November and unluckily at WATFORD (they are London in footballing terms...) a fortnight earlier. However, a last minute penalty got us a 1-1 draw at CRYSTAL PALACE and the sack, sadly, for our former manager Peter Taylor from the club he left us for, and we also got the same scoreline just before Christmas at CHARLTON ATHLETIC, which was also my only new visit of the season.

Obviously we played all of these sides at home too - only Plymouth (opening day), Charlton (October) and West Bromwich Albion (January) beat us there, while seven more managed draws against us. The rest we won, and some we won well (5-0 v Southampton, 3-0 v Barnsley, Preston and Watford).

On top of all this, we visited League One side CREWE ALEXANDRA and Premier League chancers WIGAN ATHLETIC in the Carling Cup, winning at both. We lost to Chelsea at home after that. Then there was the infamous day of severe Devonian expense in the FA Cup.

And it's not over yet. Another early riser on Sunday morning to make it back to Watford for a midday kick off, then to the KC for the return leg three days later. The winners on aggregate will then play Crystal Palace or Bristol City ...

.... no, I'm not going to mention Wem... erm, our national stadium. This is due to our record for winning in London. And the fact that we've never been there before, somewhat famously. I'll resist, for now.

So, here we have a spot of life on the road (or rail) watching your team. It's up to you decide if you think I've done anything remarkable - though I would add that a friend of mine has not missed a game of any competitive fashion for six seasons. When the Cup draws are made, he isn't praying for Liverpool or Aston Villa away, but for a trip to Wycombe Wanderers or Dagenham and Redbridge, as we're (hopefully) unlikely to play them in the League anytime soon. Bright Ambassador's team are another many Tigers fans want in the either of the knockout contests, as we've not been there competitively since 1977.

Perhaps a more remarkable achievement for me, rather than attending 50 out of 50 matches this season, is that I must be the only ever-present fan of any club who has not eaten something appalling made by Ginsters on his travels.

So, I can mow the lawn in June and July. It looks like it could do with a trim too...

Wish us luck in the play-offs.
Authored by Matthew Rudd
Email ThisBlogThis!Share to TwitterShare to FacebookShare to Pinterest
1 exclamations of response