I've got a bad back. Well, a bad shoulder, really. Or maybe a bad neck. It's hard to tell.

The root cause of the problem appears to be in my neck, but it's my back and shoulder which feels the pain and stiffness. And the pain is sometimes unbearable, especially after sleeping.

I've done it before and it clears up within a week, but obviously it's susceptible to a return. And that's what happened - I made the daft mistake of trying to take a photograph in France while approaching some stone steps. I thought I'd negotiated where the step was as I looked through the camera lens at something interesting - and my foot slipped.

I clung on to the railing at the side of the step and broke my fall, and stood up seemingly hurt only in the pride area. But the day wore on and the back started to howl at me.

A Boots version of Ralgex has been liberally applied over the last few days. The Natural Blonde, herself with back trouble that sees her regularly visiting a French-Canadian chiropractor with a large bow tie, has half-killed me with massage. I've had the type of paradox pain, the exquisite torment, which has made me beg for a lady in high heels to stamp up and down on me as I lay flat out on the floor, screaming.

It's 9.30 on Saturday morning as I type this, almost a week after the original step/camera misjudgement. It was slightly easier getting out of bed than recent days and I think I've found out why.

Last thing last night I walked the Bassets. Two on an adjoining lead, two on separate leads. The pullers, Ruby and Boris, I kept in my left hand as much as I could and the force of their excitement seemed to snap a couple of things in my stricken shoulder. It might not be scientific, it might be coincidence, but it's worked so far. Pet therapy can do wonderful things, including easing the muscular strains of their clumsy ageing daddy.

When I next have to sneeze, or when someone makes me laugh a lot, that'll be the key test.
Authored by Matthew Rudd
Email ThisBlogThis!Share to TwitterShare to FacebookShare to Pinterest
1 exclamations of response

To cap it all

Not unexpectedly, Lilian Thuram announced his international retirement after France exited wimpishly from Euro 2008. He'd been dropped for their third and final group game anyway and unless France made progress (which was always unlikely, given their utter lack of cohesion against Romania and Holland), his end was clearly nigh.

This makes him the fourth most capped player in Europe, after two Estonians and one German. It is a lot of caps, both in football terms and in terms of the proportions his trophy room closet requires in order to accommodate all the headgear because, yes, footballers do genuinely still receive caps when they represent their country. England's most capped outfield player, Bobby Moore, won a "mere" 108 caps.

Does Thuram's achievement - a first choice defender for 14 solid years - marks him out as a wildly great player, or does it show that France, for all their successes when Thuram's generation were at their peak, had no new golden generation to assume his mantle, even as he aged? When a footballing superpower such as France, a decade after winning the World Cup in such joyous manner, is still choosing a 36 year old defender with slowing legs and instincts for a major tournament, it actually does Thuram no favours.

He'll be feted as a hero in France forever - two goals in the 1998 semi-final alone did that, though playing 142 times for his country and winning two major tournaments is a handy back-up achievement - but to see such a stalwart of great heritage and once wonderful defensive ability become a slow, ponderous figure as Mutu and Van Nistelrooy trod him into the ground, was heartbreaking. Domanech did right to drop him, and Thuram's done right to say enough is enough.

You have a problem when you are picking a player out of brutal necessity, as well as a spot of sentiment, if such a player also happens to be still the best available. France's footballing future looks bleak indeed.
Authored by Matthew Rudd
Email ThisBlogThis!Share to TwitterShare to FacebookShare to Pinterest
0 exclamations of response

Other isolated stuff I liked about our French break:-

1 - The price of unleaded
2 - Buying L'Equipe each day and being able to read and understand it
3 - The stray cat who clearly gets fed by four or five different households in our hamlet every day, who now goes by the name of Scabby due to his unkempt appearance
4 - Walking through the beautiful city of Limoges in non-stop rain
5 - The noise made by the crickets outside the house at night
6 - Fresh bread and baked goods delivered to the house
7 - Drinking beer and coffee on a hillside balcony next to a beautiful lapping lake near Crozant
8 - My best go yet at conversing in the native language
9 - Empty motorways, irrespective of the time of day
10 - My pal Wesley asking, in a restaurant, what the French was for "don't bring an olive anywhere near me"
Authored by Matthew Rudd
Email ThisBlogThis!Share to TwitterShare to FacebookShare to Pinterest
0 exclamations of response 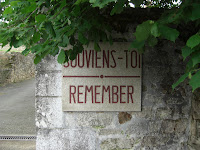 Ten days in France over and back home, refreshed and ready to re-face the world.

Let me tell you about Oradour sur Glane. We visited it as part of our sojourn. I've been there once before so the effect of the place didn't hit me as hard, but for our friends who accompanied us, it was a new and eye-opening experience.

The story of Oradour sur Glane, a small village close to Limoges in the Limousin area of central France, breaks your heart every time you hear it. The brief is simple and stark - on June 10th 1944, an SS battalion of 2,000 men marched into the village, surrounded it, rounded up every person there, shot all of the men and then suffocated the women and children by locking them in the village church and setting fire to it.

Six men survived the shootings, and just one woman escaped the church. A boy managed to escape from his school when the troops came in to collect everybody. Everyone else died.

Once the killing was completed, the Germans then set fire to the bodies to the extent that a large number could not be identified. They looted the whole village and burnt as much of it as they could.

It's horrific, even for Nazi wartime atrocities. No German commanding officer was ever brought to justice over Oradour, and an amnesty granted by the Bordeaux tribunal to the French citizens forcibly commandeered by the German occupying forces who took part at Oradour meant that no closure was ever provided for grieving relatives.

The village was rebuilt adjacently, and the ruined, lifeless shell of the old village became Government property. It was preserved in its entirety, with an underground exhibition and lecture centre, detailing all the history, constructed beneath.

You go to Oradour now, pay your admission and venture down into the exhibition centre. It details - in three different languages (sadly the English translations seem to be much briefer than the main French text) - the history and events leading up to the massacre. At the time, the Germans occupied northern and parts of western France but the Limousin area was not in their outright command.

There follows some history of Oradour itself including, poignantly, a couple of school photographs from 1944 and a copy of the last census taken from the village, which listed the numbers of men, women and children living there. You also watch a brief DVD (it used to be a film with translating headphones, now it's just a French DVD with unsatisfactorily summarised subtitles) which details the basic events of the fateful day. Then you go through another section of the exhibition which details the aftermath - discovery of the village, transcripts of statements and the deeply flawed war crimes tribunal which concluded in no convictions. The last bit of the exhibition showcases the building of the new village and the acquisition of the original Oradour as a permanent reminder of wartime horrors by the French nation.

Finally, you climb the stairs at the other end and walk round the old village. There is a sign marked 'SILENCE' as you reach the helm of the staircase but frankly, nobody need be told that speaking in anything other than hushed tones is inappropriate.

There is, within the old village, an underground memorial vault. In it is a full Roll of Honour, and you feel obliged to read every name. There are glass cabinets containing documents and photographs which survived the flames, plus personal effects such as keys, spectacles, toys and coins. Most poignantly, the remains of the victims are stored here, though the public cannot see those.

Oradour sur Glane remains an unfinished campaign to the descendants and relatives of those who died. It's about 20 minutes drive from Limoges Airport.

Photography in the exhibition and the underground memorial is disallowed, but cameras were permitted in the streets of the old village itself. I hope these pictures, a handful of the many I took, give significant enough an indication of what occurred that day. 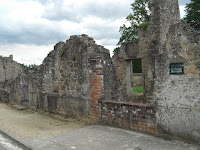 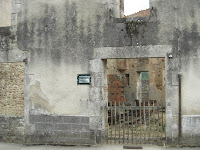 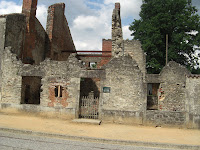 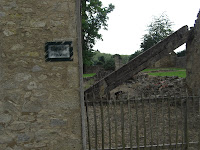 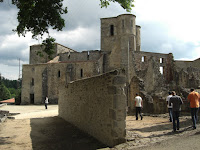 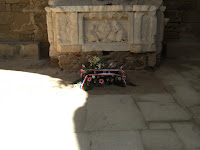 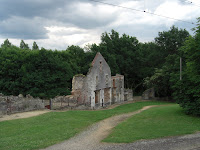 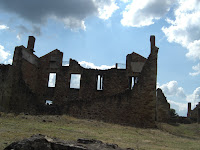 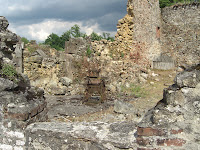 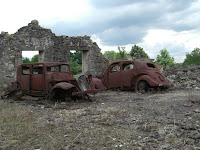 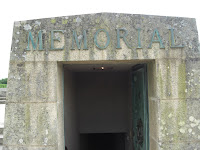 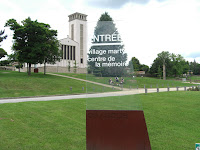