This is my last blogging opportunity until Sunday now, as I'm on a showbiz night out in London tonight with Alex and other radio and blogging pals, so all I ask of you is to wish Hull City luck and good cheer as we embark on our Premier League adventure.

We start tomorrow at home to Fulham.

With the spirit of Wembley within us and a host of fine new signings, we have a chance. We really do.

Thanks. Really, thanks.
Authored by Matthew Rudd
Email ThisBlogThis!Share to TwitterShare to FacebookShare to Pinterest
4 exclamations of response

""You should always look at politicians' MI5 files, if you enjoy a good laugh"

Inspired by the recent Comedy Connections episode on the programme, I retrieved one of my favourite episodes of any sitcom at all from my DVD collection the other night and settled down to watch it.

It was Party Games, the last episode of Yes, Minister - a feature-length festive edition which showed the rise of Jim Hacker from the fictional Department of Administrative Affairs to the top job in Number Ten. 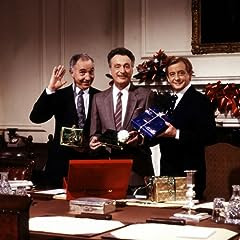 It is a fantastically clever piece of work, even beyond the consistent intelligence and insight which Jay and Lynn wrote into each episode. Only after hearing what the two writers had to say about Party Games did I realise just how effective and intuitive the plot to get Hacker into the top job was.

Hacker, as we know, was conscientious and decent but not blessed with a first-class mind and always too quick to worry about what certain policy ideas would do for his majority or his job, making him easily manipulated by his civil servants, led by the immortal Sir Humphrey Appleby. Therefore, the only way to get such a wildcard, such an outsider, into Number Ten was to put Humphrey there first.

It was an ingenious story without ever seeming remotely contrived. Sir Arnold retires as Cabinet Secretary, fast-tracks Humphrey into the job through a series of barely shrouded pieces of controlled bribery, and then upon the resignation of the (never-seen) Prime Minister, Humphrey takes the opportunity to discredit the obvious candidates in order to get Hacker into Number Ten and therefore obtain much greater control of national affairs for himself. Hacker, of course, doesn't see it this way - he merely believes that the underhand campaign to elevate him to power is down to the goodness of Humphrey, his party's belief in him and his own lofty ambitions.

The one-liners are just amazing ... such as:-

Humphrey: "How's things going at the campaign for Freedom of Information, by the way?"
Arnold: "Sorry, I can't talk about that."

When Jay and Lynn came up with these, they must have laughed like hell. What brilliant pieces of writing, and yet you can imagine real civil servants having exactly these discussions, without the benefit of a studio audience to point out the irony.

And, of course, thanks to all the scenarios coming together, Hacker got the gig. For all the brilliance of Yes, Prime Minister which followed, the crossover episode which moved the three main protagonists into Number Ten should be held as high as any other piece of sitcom writing as an example of how it should be done.
Authored by Matthew Rudd
Email ThisBlogThis!Share to TwitterShare to FacebookShare to Pinterest
0 exclamations of response

I'm sure we've all done this.

I went to the cashpoint, put the card in, entered the appropriate PIN, selected the option to withdraw cash, took my card out again - and clean forgot to pick up the money. I just walked away, head in the clouds.

Five minutes later, I realised my error and hurtled back to the hole-in-the-wall where, naturally, someone had collected my twenty quid.

Good for them. Nobody was about and it was their great good luck. I had to withdraw another score from the machine, feeling decidedly irritated by my absent-mindedness. I'd had a busy day and there is much going through my mind right now.

Like I say, I'm sure we've all done this...
Authored by Matthew Rudd
Email ThisBlogThis!Share to TwitterShare to FacebookShare to Pinterest
6 exclamations of response

Confound grumps like Five-Centres, who seems to think that because most of our Olympians are involved in sport which doesn't get much publicity the rest of the time, that this somehow makes our most successful competitors less newsworthy when they do well.

She will have undertaken this sort of regime ever since her potential was spotted and she's had up to four years of putting her life on hold for the glorious moment when she took on the world and won. Here we can relive it...

The joy and rapture in her face when she saw the final placings encapsulated that moment perfectly - all those months and years of sheer hard work and sacrifice had paid off - and then churls like F-C whinge about it.

My blood is boiling!

Rebecca has a gold medal which is hers forever and ever. The UK has few female Olympians who have struck gold so even the biggest killjoys like F-C should be prepared to shrug and say well done. Or keep quiet. Or take up a sport and see how long they last before they return to the crisps, beer, telly and criticism.

Cuh. And to think I like him too...
Authored by Matthew Rudd
Email ThisBlogThis!Share to TwitterShare to FacebookShare to Pinterest
6 exclamations of response

I hate the public sometimes

Following on from the post below, I'd just like to issue a short message to those people who texted 5 Live overnight while listening to the swimming coverage in Beijing, claiming our swimmers were lazy, unmotivated, untalented, lacking in ambition and riddled with excuses:

Thank you.
Authored by Matthew Rudd
Email ThisBlogThis!Share to TwitterShare to FacebookShare to Pinterest
2 exclamations of response