All set for Valentine Suicide to explode with rage?

I have to be quick, as Stockport awaits ... but two things strike me from tonight's Strictly Come Dancing:

1 - Why couldn't the fair Karen have been given Austin Healey?
2 - Did Len really use the expression "gnat's scrotum"?

Ace. Sorry VS, I'll do something you approve of soon, promise...
Authored by Matthew Rudd
Email ThisBlogThis!Share to TwitterShare to FacebookShare to Pinterest
2 exclamations of response

The Prince of Darkness, back into the light 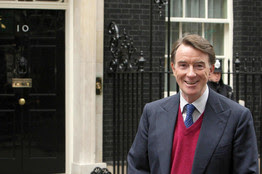 Better minds than mine will have the capacity to assess and analyse Peter Mandelson's remarkable return to government. All I know is that a) Brown hates him, so he has lost serious face in recalling him to the corridors; and b) wearing a v-neck pullover with a suit is a very bad thing indeed.
Authored by Matthew Rudd
Email ThisBlogThis!Share to TwitterShare to FacebookShare to Pinterest
1 exclamations of response

Blogger par excellence Five-Centres makes his sad exit at 5pm today. Click on his link and whack up his hit counter one last time for a thorough re-read before it goes forever...

Hope Chris Hughes has printed it all out...
Authored by Matthew Rudd
Email ThisBlogThis!Share to TwitterShare to FacebookShare to Pinterest
9 exclamations of response

Not suitable for the pregnant or those with cardiac complaints 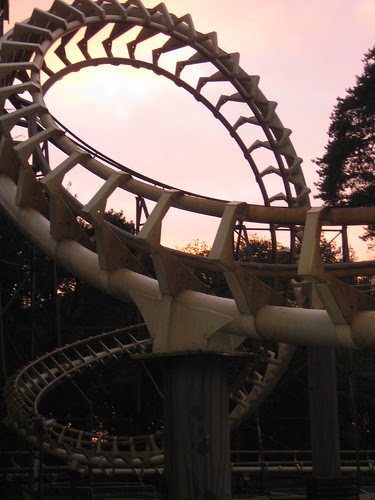 What a pity that Alton Towers is dismantling the Corkscrew after 28 years of thrills, chills and, erm, long queues.

I haven't been to Alton Towers for 20 years but did visit quite a lot in my childhood. The Corkscrew was the focal point of the park - on the brochures, the logo etc - although it was never quite the scariest ride there. Anybody whose digestive system remained in roughly the place where nature intended after riding the 1001 Nights was fortunate, and the Corkscrew was a picnic by comparison.

Then there was the Black Hole - the indoor, darkened Corkscrew. It came with a certain reputation when I made my earliest visits - first time round it was closed for "repair"; second time round it was open but my deputy headmaster banned us from going on because there had been an "incident" thereon fairly recently. When I finally did get on, myself and my pal Karl had our picture taken, which spat itself out of the slot at us as we waited in the post-ride recovery area. I was wearing an Ennesse top (classy - hello, 1986!) and had my eyes closed and seemed to be yelling in fear. Karl, meanwhile, was posing. I still don't know how he knew exactly when on the ride the camera would flash at us.

Alton Towers will, to my generation, be recalled as much for hosting Hold Tight! and being booked in its entirety by Michael Jackson for his entourage's day off during his 1988 UK tour as it is for the days out we spent there. For a while, a sticker saying "I've Been To Alton Towers" was on my dad's Sierra. Forgive us, for we knew not what we did.

The only time, as an adult, I've been even briefly reminded of its existence is when driving on the M1 or M6 and seeing the brown signs informing us where the appropriate junction for the theme park is. I think every fearless child of the fairground learns how to avoid dangerous rides at theme parks and funfairs as they mature. Hell, I'm from Hull, the city with the largest travelling fair in Europe (due here this month, actually) and while Matthew the primary school pupil was on the Big Wheel and various rollercoasters and twisty, sick-making contraptions, Matthew the sober adult is generally content with trying to knock down six tin cans with sponge ball and enjoying a hot dog. That's if I go at all.

There's a bungee ride at Hull Fair these days - you go upwards, very slowly, in a big circular carriage, then when the whole city is in your sights from high up, you just drop straight back down again, on bungee ropes. It looks utterly petrifying from a distance, but the eight year old me would have been straight on there, with no awareness of the consequences. The 35 year old me wouldn't be dragged on there by wild horses.

As for the Corkscrew, I think I'd probably still go on it if I found myself back at Alton Towers. It might be a little outdated now, either in thrill factor or just in terms of its age, rustiness and popularity. But to a hell of a lot of kids it was the focal point of a big day out at a time when theme parks were rare. It's the end of an era.
Authored by Matthew Rudd
Email ThisBlogThis!Share to TwitterShare to FacebookShare to Pinterest
1 exclamations of response

"Bob Dylan didn't have this to sing about..."

One magazine review said at the time, wrongly, that the song "lacked a certain something". The Americans didn't think so - they took it to #1. Meanwhile, the UK record buying public had two separate releases to show their appreciation - and it stalled at #31 both times. Cuh.
Authored by Matthew Rudd
Email ThisBlogThis!Share to TwitterShare to FacebookShare to Pinterest
5 exclamations of response 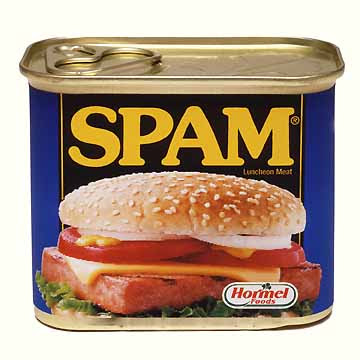 Since adding an email address to this blog I've had a fair bit of spam come through. I don't mind - it's a one-click job to get shut of it. However, I've noticed that gmail has linked to a recipe site which gives you a tasty spam-related dish each time you go into your spam folder for a clearout. And, well, spam hashbrown bake sounds really tasty...
Authored by Matthew Rudd
Email ThisBlogThis!Share to TwitterShare to FacebookShare to Pinterest
1 exclamations of response

I've never claimed to have a way with words, so on this occasion I'm glad I cannot even for a moment put into legible English the way I feel after going to Arsenal and winning.
Authored by Matthew Rudd
Email ThisBlogThis!Share to TwitterShare to FacebookShare to Pinterest
3 exclamations of response