Broadband on the run

Got the broadband back at last, not despite the best efforts of Kingston Communications. Their engineer turns up, doesn't fix the problem, comes back the next day (but only after we bollocked his supervisor - until then there was nobody free until Wednesday next week), sorts the problem again, but then says he can't help set up the new wireless broadband connection he has installed, because ...

a) ... he is disallowed from touching a customer's computer. I offer to do all the clicking and typing while he just speaks, so ...
b) ... he says we should ring the technical support desk of Kingston Communications who can help us better, and just in case we start pleading with him not to inflict half an hour of Greensleeves on us, he then adds...
c) ... he's got to go to another job. With that, he walks out without testing or checking the job he'd done. Our extension builders watch him leave, appalled at the lack of customer care.

So we follow b) only to be told that Kingston Communications do not 'recognise' Netgear stuff and ring off. They can install it into their lines but then not help us connect it up. Brilliant. Their own engineer told us to do this, remember.

With a sense of dread, we have no option but to try self-installation. This then hits a snag, so eventually I ring the national rate number on the Netgear booklet. Initially an English accent turns into an American one and finally the real person I get is in India.

Ten minutes later she has superbly taken me through the set-up procedure. Professional, charming, courteous and patient. This rotten phone and web company we have to use round these parts could learn so much.
Authored by Matthew Rudd
Email ThisBlogThis!Share to TwitterShare to FacebookShare to Pinterest
1 exclamations of response

Typing this on my parents' laptop

I'm being quiet because my broadband is bust and Kingston Communications are being their usual incompetent selves in getting round to fixing it. A bloke arrived this morning, saw the workmen doing the extension and blithely asked "So where have you cut the wires then?". The ignorant arse. The problem is not related to the renovation at all. He then proceeded to fix the landline (which was also down) and forget about/prove incapable of mending the broadband. He left, and I still have no idea if he's coming back.

You lot who don't have a monopolising telecommunications company in your town or city are the lucky ones. Customer care is not a heavy priority when the company has no rivals.

So it's nothing personal, promise. This is assuming you've noticed. After all, Phil only writes something once a month and I for one hang on his every word. So go read his blog while I try to regain homebound access to mine. And make yourself a brew whil you're at it.
Authored by Matthew Rudd
Email ThisBlogThis!Share to TwitterShare to FacebookShare to Pinterest
3 exclamations of response 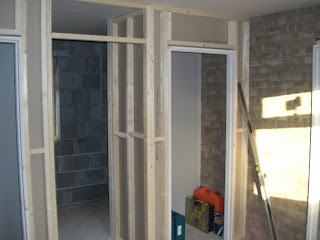 An electrician is coming round today to wire up the new additions to the house, and I'm typing this via a makeshift computer desk on a filing cabinet as he needs access to the corner of the room where the PC has been parked for many years.

With the gas and the water already connected, the addition of electricity is another watershed moment. The builders have done a cracking job, to the extent that they've got two new jobs out of it for the New Year. The couple across the road have just acquired permission for a loft conversion and popped over to ask our three if they were available, while a friend of another neighbour has just accepted a quote for a new driveway. I suppose in the building trade recommendations and evidence with your own eyes of a builder's ability is all you need - no wonder so many builders' vans have 'RECOMMENDATIONS ONLY' painted on the side.

In the new bedroom, the walk-in wardrobes and entrance to the en suite bathroom have been fixed, while downstairs the wooden frames which will become dividing walls have been constructed. The cats, when emerging from their daily hiding places, love these - Sidney has already started leaping between them like a monkey while Sox, the large-bellied moggy, has managed to defy gravity and size issues by falling asleep on a piece of wood half her own girth.

The builders have been listening to Radio 1 rather loudly every day, which surprises me a little as the youngest of them has just turned 39. Chris Moyles played The Only One I Know by the Charlatans on Friday, and I was asked by the builders which year it was. Cue half an hour of memories of seeing the band at Bridlington Spa in 1990...

Judging by the lights in Hull city centre and the adverts featuring Mariah Carey on television, Christmas is close by now. This means the extension will soon be finished. Hurray!
Authored by Matthew Rudd
Email ThisBlogThis!Share to TwitterShare to FacebookShare to Pinterest
0 exclamations of response 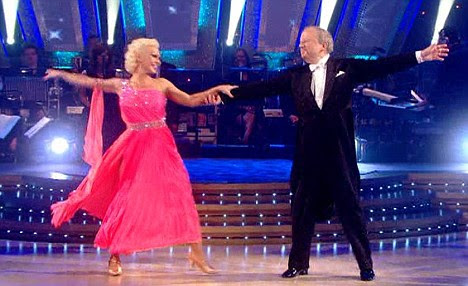 Oooh, I sense an outcry on Strictly Come Dancing. Another passably talented celeb in Cherie Lunghi gets the bullet while John Sergeant, hapless but endearing, survives the public vote.

The judges are livid and, as specialists in their field, their chagrin is understandable. It's also funny. Len Goodman wants to spontaneously combust. Craig Revel Horwood seems to be on the point of quitting. It's not for the purists of movement to music, but Sergeant's continuing survival is gripping stuff nonetheless.

First and foremost, Sergeant is surviving because the public like him. It's a popularity contest as much as a dance contest. Were it not designed so, then 50% of the voting tally wouldn't have been handed over to people who know nothing about dance. Sergeant, unlike previous car crashers (hello, Fiona), has not sought to claim he is any good, not made excuses, smiled at the criticism (he got far worse from Margaret Thatcher in his time) and issued the odd belly-bending one-liner.

Cherie Lunghi was unfortunate, certainly. She's great at ballroom but clunky with Latin (apparently... I'm going by what the judges have said over the weeks) and ultimately her Latin let her down. Jodie Kidd isn't as good as her, but she's also getting through on the popularity stakes, being as she is easily the most likeable, down-to-earth of these model types who also claim to be television presenters. She survives because the public like her, end of. Lunghi isn't disliked, I suspect, though she won't get any girlie votes because of jealousy (the awful Jessie Wallace called her a snob, remember, just because she has a middle-class accent) and won't get the casual vote because she hasn't made jokes or challenged Bruno Tonioli to a fight.

As the other competitors emerged from backstage to console Lunghi and her partner (whose name escapes me, but he appealed to the public to start voting for the dancing - ie, spend your money on a phone call but make sure you do it how we want, please), you could tell they were stunned that an obvious big-hitter had gone while an obvious outsider remained. And more may yet fall by the wayside as Sergeant makes his progress. It's not his fault he keeps surviving, but the judges and professional dancers are wrong to claim it's the public's fault. Give a half of the vote to people who are notorious for looking at personality ahead of suitability and you're on a hiding to nothing. It makes me wonder whether Sergeant's charisma is strong enough to withstand a backbiting session from the other competitors, all of whom are now petrified of exiting while he remains.

Irrespective of where Sergeant finishes overall (I reckon he'll go in the next fortnight - eventually he'll be in the dance-off and it would take that Holby City bloke to suffer acute cramp in his groin before Sergeant survives one of those), watch the rules take a subtle alteration next year. They'll give the couple with the highest score from the judges an automatic place in the next round, and reduce the public vote to a quarter. Hopefully they'll reduce the cost of the phone call as a consequence.

Lisa Snowdon to win.
Authored by Matthew Rudd
Email ThisBlogThis!Share to TwitterShare to FacebookShare to Pinterest
3 exclamations of response