Take Feature or Spin Again, or something like that 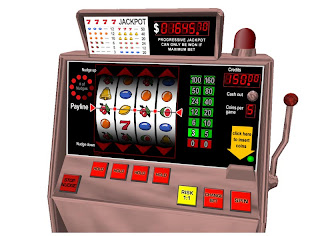 A totally shattered quintet of young men trooped into Woodall Services on the M1 near Sheffield at roughly 1.45am. Service stations are the brainchild of the world's most evil, as we all know, but this was a necessary stop as we all needed to use the lavvy and me, the bleary-eyed driver, required some fresh air and a leg stretch. We'd been to London to watch a football match and we were as shattered emotionally (due to the pallid performance of our team) as we were physically.

Aside from the night staff, there were only two other people in the building when we turned up. A middle-aged woman, in a long cardigan with greying hair tied back; and a middle aged man in scruffy jeans and a pate widening on his head. Both of them had carrier bags of stuff on the floor next to them.

That's the only description I can offer, because they had their backs to me. The reason for this is that they were in the amusements section, pouring coin after coin into a gambling machine, all flashing lights and spinning reels.

Who on earth inhabits a deserted motorway service station at almost 2am on a weeknight just to play on the bandits?

Well, I can probably answer my own question. Addicts. We see on all the billboards and television commercials for online gambling, casinos, turf accountants and the like, the web address for people with gambling problems and their worried relatives. Like any other addict, a person whose life revolves around gaming - whether it's in arcades or the bookies - will not acknowledge they have a problem until something unspeakable happens to snap them from the trance their habit puts them in.

And yet I can't help but feel that somewhere as prosaic as a motorway service station can do more to stop these people from turning beyond the witching hour to pour quid after quid into these machines. A pub is legally bound to refuse to serve people who are drunk. Are premises licensed for gambling legally bound to refuse service to someone clearly hooked on their wares?

I may be wrong, but I reckon these two people we saw at Woodall stayed there all night, or at least until the change ran out. Throwing change into these machines is rare proof of that awful anti-sport cliché that the winning is not as important as the taking part. If either of these sprung a jackpot - which I understand is barely worth the investment these days compared to machines on the continent and beyond - then they'd be far more thrilled at having more change to put back in, rather than at having lots of money in their possession to take home. I also reckon that these two people go to a quiet service station because they are either barred from arcades closer to home, or they want to keep their habit a secret from loved ones and so go far from their locality to play. As I said, I may be wrong - they may each be incisive experts in their field and make a good living from gambling. I doubt it though. This wasn't Henry Sugar at Lord's House, this was a pair of bedraggled, sorry-looking people who should have been in bed.

I've played bandits occasionally, though only in pubs. I find them briefly intriguing but ultimately there are so many tricks and rules and rituals in place that you spend a fortune just mastering the particular machine. Then, as soon as you have, the pub changes the machine. It's just so not worth it, and not just financially. A couple of quid, often to pass the time while I wait for someone to arrive, is enough for me. Give me a quiz or puzzle machine anyday, as I know I have a chance of getting my money back at least.

Those two people were still locked behind the door of their own little world, containing themselves and a machine they think is their friend, as the five of us exited the building and headed back to the car, anxious to tuck under our respective duvets. I expect they'll be there again tonight. And tomorrow.
Authored by Matthew Rudd
Email ThisBlogThis!Share to TwitterShare to FacebookShare to Pinterest
3 exclamations of response

"Even heroes have the right to dream..."

Long drive to London and back for spherical leather reasons today, so I'll leave you in the glorious company of the song which I always scroll to when the iPod goes into my ears. Sadly, the video can't be embedded due to owner request, so instead it's over some TV programme I've never seen. But it's all about the music, goddammit!

Have a good day.

Popped down the doctor's today for an appointment to undergo some minor surgery. The removal of the papule was painless enough, aside from the stinging local anaesthetic; even the amiable chit-chat about my radio career was enjoyable as the doc talked about commercials about double glazing companies while plunging needles through my numbed skin.

However, the soundtrack he'd chosen to 'soothe' his patients' nerves was the greatest hits of Phil Collins. I'm not a big fan, despite my 1980s obsession, and to be at the mercy of both a GP holding sharpened tweezers and the unappealing brass nonsense of Both Sides Of The Story made me half-wish I'd gone private. Given the helpless situation I was in, I'm glad I Missed Again didn't come on.

Stitches now in place and I'm off to get some paracetamol...
Authored by Matthew Rudd
Email ThisBlogThis!Share to TwitterShare to FacebookShare to Pinterest
4 exclamations of response

We have a kitchen again! Hurray!

No more collecting mugs and cutlery from a box in the conservatory which is liable to fall over and break everything at any moment! No more washing up in a bucket, filled with a pint glass via the upstairs wash basin! No more takeaway journeys every night because we have nothing to cook with! No more leaving milk outside at night because it's the only place cold enough to keep it fresh!

The new kitchen is fitted and fab. We are a couple of cupboard doors short, as the order was miscounted by the chaps at Wickes, but that will be sorted tomorrow. The decorating is done too, and just the floor needs laying.

Anyone clocked the kitchen Joe McIntyre fitted for Gail in a hurry on Coronation Street to replace the one the Windass family nicked? According to the Natural Blonde, it's a botch job as the extractor hood is built into a cupboard.

We still have a lot to do - dining room, hallway, stairwell - but we can now almost touch the day when we have our home back...
Authored by Matthew Rudd
Email ThisBlogThis!Share to TwitterShare to FacebookShare to Pinterest
0 exclamations of response