From Mike Park of Weymouth, in today's Daily Mail:

Let's face it, who would you rather watch: the very intelligent Gail Trimble on University Challenge (who appears to know everything), or CJ de Mooie on Eggheads (who thinks he does)?

Ace. I'd love to see CJ (or Chris Hughes, or Kevin Ashman) on University Challenge, as I reckon they wouldn't know a thing. There's a difference between knowledge and intelligence.
Authored by Matthew Rudd
Email ThisBlogThis!Share to TwitterShare to FacebookShare to Pinterest
1 exclamations of response

"She doesn't take any notice of central London roadworks" 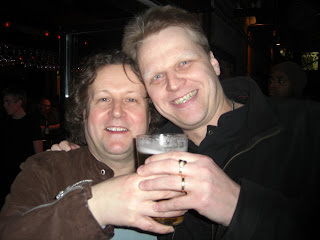 Alex Lester and I, apparently holding hands over a beer. The radio boys night out, which Alex elects to call the "nerd night" when he mentions it on Radio 2, was an absolute stormer. Newcastle upon Tyne looked after us well.

A lot of us stayed at a branch of the Premier Inn in the city and upon entering the hotel bar at the roughly-arranged meeting time of 5.30pm, I found a large Glaswegian stag do had managed to take up every seat in the place. As I stood in my painful suede boots and sipped my first Guinness of a long night, the noise got more and more raucous, as tradition seemed to dictate that every time another of their number turned up in the bar the cheer of greeting had to be slightly louder and slightly longer than the previous one.

Eventually, they dispersed and I grabbed a large sofa seat and table, ready for the arrival of the others. All who were due at the hotel had arrived and were in various stages of ablution in their rooms. One by one they pitched up and a couple of swift ales and discussions about radio playout systems later (Dalet is still best, Myriad is temperamental, RCS reliable but restricted and Enco utter toss...), we began a leisurely walk to a city centre pub to meet more of our lot.

Then it was on to the restaurant, a local Chinese. Our host, John Foster of BBC Tees, was being filmed by a documentary crew all week as he partook in a challenge to live off a quid a day, something which shouldn't have sounded especially unusual to those of us who have worked in some sectors of commercial radio. The week of poverty and scrimping officially 'ended' when he was handed his wallet back in the restaurant and our group of 20 or so all spontaneously applauded and whooped exactly in the manner he had asked us to spontaneously applaud a few minutes earlier.

I'm not the biggest lover of Chinese food, but I was happily tucking into my chicken in black bean sauce when I realised I was the only person in the room using a fork. Everyone else, schooled and dextrous in the application of oriental cutlery, were picking up their scran with chopsticks and me, the utter philistine, was being very anglicised about it. With a gruff spot of self-admonishment, I allowed my close friend Martin Emery to give me an impromptu lesson in the art of wielding these things, and for a short while I managed to cling on to slabs of chicken and cuts of red pepper just long enough for them to make contact with the inside of my mouth. However, the rice and noodles remained very much for the fork.

My dish, including the noodles and rice, cost me twenty quid, meaning that I also now have an extra reason to turn my nose up at Chinese - the expense. Still, upon leaving the restaurant the night picked up when a handful of us - not including our freshly re-walleted host John, who had a 6am flight to catch and therefore was heading home - went to a series of bars that were interconnected and had a communal ginnel for outdoor drinking which was both sheltered from the elements and able to accommodate smokers. The music for all three bars came from one DJ, with his repertoire resembling mine from the 90s Night, so I was in my element as I sloshed down barely calculable flaggons of the black stuff while singing along to You Got The Love and further discussing whether anything could be made of Enco. Apart from a bonfire.

The music wasn't overbearingly loud but voice of the balls Charles Nove, a regular socialiser on these bi-monthly gatherings and a man who reads Radio 2's breakfast news and helps devour the sausage sandwiches with Terry Wogan, found it hard to cope with such loudness after being used to merely hearing Eva Cassidy and the Lighthouse Family on mid-volume for many years, and decided to return to the hotel. He also observed one or two rather disturbing, probably illegal, and definitely anecdotal occurrences on the street, which he has alluded to in the Waspish Comebacks section of the blog post below. Ask him to put details on Chazzablog...

At 2.30am, having found a sofa as the part-timers elsewhere headed to their beds, we were still ready for more but the doormen put paid to the notion of further ale. Given that Martin, Simon, Steve and I were all breakfast jocks, we'd come close to a period of non-stop consciousness which was pushing 24 hours, while Alex and Roger, as early shifters, had only managed negligible sleep prior to preparing for the evening's festivities. This made us all hard as nails, obviously...

We said goodbye to Clive - he wasn't with us at the hotel - and caught cabs. The hotel bar closed at 11pm (so we won't be staying there again) and therefore upon our return there was little choice but to retire to our respective pits with an agreement to meet at 9am for breakfast. I climbed into bed - Premier Inn is better than Travelodge in that a) the towels actually contain some towelling; and b) the bed does seem to have a comfort factor overriding the unhealthy starch rating - and with Sky Sports News playing on the telly, fell asleep.

Upon waking at 8am, the telly was still on, and in my snooze mode for the next half hour I only ever seemed to wake when Alexandra Quinn was doing her racing tips. Eventually the headache shook me wide awake - I get truly dreadful hangovers, even after applying some of the precautionary or preventative tactics like drinking a bucket of water before sleep - and stumbled across to the small crockery display to grab a glass, fill it with water and apply a sachet of the world's greatest ever medical innovation. You can forget keyhole surgery, MRI scans, the MMR jab or multiple organ transplants; a bag of Resolve is where it's at. I downed the solution in one and dozed for another half hour. Upon re-awakening at 8.50am, the headache was no more. Hazah! After very quickly scrubbing and clothing myself, I went downstairs.

Only Roger had also made it for 9am, and the two of us chatted about his nightshifts on Ikea's in-store station (apparently Roger starts at 4am but has to be at his desk for 3am so he has time to assemble it) while devouring a considerable fry-up which was, according to the literature on reception, an all-you-can-eat job.

Martin and his ladyfriend came down next, then Charles and Michael. Alex emerged afterwards, then Simon and Steve were last down. As we ate, swapped totally unbloggable bits of gossip and generally strived to resemble people who have had enough sleep, the main focal point was aimed towards a young woman, early 20s, who was not only eating her breakfast while still wearing her pyjamas (pink, stripy things - the pyjamas, that is) but was also loudly and in a Scottish accent telling her companions - similarly female and Scottish, though they had at least located some clothes - that she wanted them to finish their breakfast quickly because she wanted a pint. This must have been the hen party to follow the stag do from the evening before. The expression "she'll be wearing pink pyjamas when she comes" seemed to be apt, crude and grotesque all at the same time.

Bellies full of saturated fat, away we went, back to our lives in Hull, Manchester, London, Hastings, Barnsley, Salisbury and Lincoln, vowing to meet again in another two months time. London seems to re-beckon for the end of April, which may mean I get to talk to Sally Boazman about A-roads again all evening.
Authored by Matthew Rudd
Email ThisBlogThis!Share to TwitterShare to FacebookShare to Pinterest
1 exclamations of response