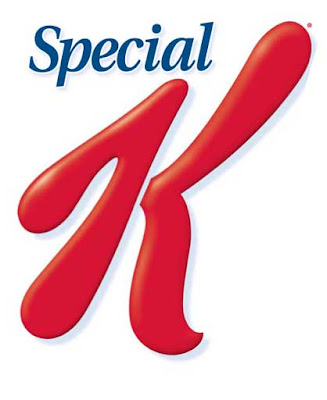 Another advert is irritating me at the moment.

It's the Special K one, the one with the oh-so-earnest voiceover man asking "you" if you're going to be able to get into your swimsuit this summer? Well, eat Special K once a day and .... yadayadayada. We get the message.

What irritates me is that the woman they use in the advert who is looking in the window of the shop and imagining her cossie on her is not even remotely overweight. Indeed, the loss of any weight, be it thanks to controlled doses of Special K or wanton bouts of heavy-duty bulimia, would make her look too skinny and scrawny. If these products really are designed to help you lose weight "as part of a calorie controlled diet" then why don't they use an authentic fat person, of either gender? A proper salad dodger? Not some attractive lass who is the physical epitome of normal and, indeed, looks proper ace?
Authored by Matthew Rudd
Email ThisBlogThis!Share to TwitterShare to FacebookShare to Pinterest
3 exclamations of response 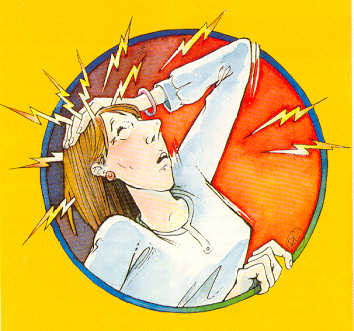 I started getting migraines about a year ago, having previously not had a clue exactly what they were. Hedex and other tablet-makers had long used the expression "even in migraine headaches" when flogging their wares to us on telly, but throughout adulthood I never knew specifically what that meant.

Now I do. And oh God, they make you feel horrendous.

I don't know why I've started getting them in the last year or so and not any time before then. Assuming my weird and varied working hours are a contributory factor, I should have been getting them back in 1997, when I first started doing regular nightshifts and living the hermit's lifestyle, a pattern which existed for four years without me ever quite getting entirely used to it.

Then it was on to better sleep patterns but long old driving trips per day when I moved jobs to Stockport. Upon getting the breakfast show in 2002, I was up at 3.15am every weekday and at least once a week would hit a lunchtime wall of fatigue which felt entirely insurmountable. Such hours play havoc with your body clock in all ways - not just how tired you are, but also when you get hungry and how much you eat as a consequence, even when you get the horn. And yet my head remained clear.

So, they finally began about a year ago. As soon as I felt the combination of blinding headache with an eye aura and a nauseous feeling, I knew what it was, even though I'd mildly scorned migraine's existence previously through a mixture of ignorance and great good luck that I'd never experienced one. Well, now I knew what one was. It floored me. Knocked me sideways.

I probably get one every fortnight or so now. They seem to strike on Sundays, when I've done a long night at the club and then, after about five hours of sleep, get up to spend three hours on the radio. All I would consume during this time would be coffee, which was an obvious no-no, so I began making sure I ate something. This assisted, but occasionally on Sundays I'll go home knowing that the aura is there in my eyes and if I'm lucky I'll not get the headache until I've managed to walk through my back door and locate a sofa.

On one Sunday, I got the whole migraine while still on air. I only had 15 minutes or so to go, so I finished the show without a problem, but the drive home was one of the single most appalling experiences of my life. I felt drunk, or worse than drunk, and probably shouldn't have been on the road, but I had no medication with me at all and had literally no choice but to plough the motorway eastwards until my house came into blessed view. Fortunately, with my migraines, the aura which follows your line of sight everywhere, had gone and been replaced by the headache, so while I was in awful pain I could, at least, see in front of me.

My first show in Preston last week was affected by migraine, and I'd only just got up. I had slept well and rose at 3am without too many hitches but within 20 minutes of getting into the car, the aura enveloped my eyes and I knew a migraine was on the way. Not only had I slept well, I'd eaten some breakfast and so was annoyed that the damned thing had got to me, so I stopped at a service station on the M61. Fortunately, it sold migraine-strength Nurofen - not all of these places do - and I took a couple in the car for the last leg of my journey. I got lucky, as when the aura did its disappearing act while I prepared the show in the studio, the headache didn't follow. What did follow was a weird - insert your own joke her - empty feeling in my head, as if it knew a headache was expected but didn't know why it hadn't arrived, and so had created a space for it. I avoided the migraine, but instead had a bruised feeling to the inside of my head, rendering it painful if I coughed or sneezed.

I don't know what causes them. The doctor has said it's most likely to be dietary or sleep-related. I certainly think my eyesight is okay. They come often enough for me to know when to expect them, and now I have migraine-strength tablets on my person all the time. But I feel sorry that I ever scorned their existence, or sub-consciously doubted anyone who previously suffered from them (the teenage son of a friend of mine had them frequently at one time). They are simply the most awful things in the world ... and when you consider that I can be put wholly out of action by a mild hangover, I'm not the ideal migraine victim.
Authored by Matthew Rudd
Email ThisBlogThis!Share to TwitterShare to FacebookShare to Pinterest
5 exclamations of response It's now 20 years since the authorities suddenly realised that football supporters were human beings.

What a pity the same authorities still won't take responsibility for the needless deaths of 96 people, and are still covering up the truth of that appalling day.
Authored by Matthew Rudd
Email ThisBlogThis!Share to TwitterShare to FacebookShare to Pinterest
0 exclamations of response

"Going anywhere nice on your holidays?"

I had the hair trimmed again today. The longer locks are now a distant memory and as I'm 36 next month, a little less experimentation and more conformity is called for with the old barnet. So the barber received my custom.

Two barbers' chairs, normally for two barbers. But today it was just one. This annoys me because the customers just pile up like binbags during the winter of discontent, idly flicking through ageing magazines with coffee stains thereon, seemingly happy and able to spend entire afternoons waiting for it to be their turn to get their hair chopped. Your heart sinks when you walk in and spot that there are at least three blokes ahead of you, meaning you end up with at least an hour's wait. It doesn't take an hour to read a copy of Motorcycle News or the woeful TV guide that came with Saturday's Daily Express.

My barber has been in his little empire for a good 30 years, I reckon. There are many ladies' salons in the small town where I grew up, and each will happily take male customers too, but when the need such as mine is for a basic trim and nothing more, then an appointment-free scoot to sit in a barber's chair suits me fine. My hair didn't need washing, nor did I want coffee or to move from one corner of the salon to another with a towel round my neck. Sit, snip, pay and go.

So there I am, being very British about it all, not speaking to any of the other waiting customers - a pensioner, two lads in their 20s and a small boy dragged along by his mum - but merely reading magazines in which I have negligible interest and doing Twitter and texting on the mobile.

The small boy scenario took me back a bit, especially when it was his turn to go into the chair and his mum shouted across the room what she, not he, but she wanted ... I reckon it wasn't until I was 12 or so before I rebelled and told my mother that I was going to choose my haircut. As a swimmer I had to have short hair - swimming caps were commonplace but it was still easier to tuck shorter hair in - but I remember taking a pic of Paul Weller, in his sticky-up Style Council phase, and asking for that. I got it. It didn't suit me.

Knowing that I'd never get away with orange Howard Jones hair, the only other pop star hair of the 80s I thought I might like was Curt Smith's greased back style of 1986-ish. This meant growing it first, and I didn't have the patience. I finally decided to stop having my hair cut for a while when I was 15, and duly grew it through sixth form and journalism college, generally looking like a subtle blend of div and idiot throughout.

My brother once took a picture of snooker star Tony Knowles into the barber's and duly got that hairdo. It didn't suit him, given that Knowles had a soul boy style and our kid was wearing AC/DC T-shirts and denim jackets all the time.

Now I'm short and spiky - this is still the hair, arf arf - and it'll probably stay this way until or unless it falls out entirely without barber help.

And despite the prevalence of the cliché, I can honestly say that no barber has ever asked me if I'd like "something for the weekend". I would love to be asked though, if only to quote Patrick Marber's diary routine and reply: "Yes, please. A toupee."
Authored by Matthew Rudd
Email ThisBlogThis!Share to TwitterShare to FacebookShare to Pinterest
1 exclamations of response