Been doing breakfast shows all week here and therefore the time/urge for blogging has been a little restricted. However, plenty of hair will be let down tonight as it's off to London for the latest radio boys Nerd Night with Alex et al. I'm flying down there (ooooh, get me) immediately after the show and it'll end up as a nigh on 24 hour shift.

Then there is the small matter of praying that Hull City avoid relegation on Sunday, which is also my 36th birthday. Given that the same date last year had such dual significance, I'd rather hope this year will be equally as euphoric. When I turn 37 next year, I'd like the day to be eventless and unemotional, thanks...

So, as if it makes everything palatable and fine, (and as I've not mentioned the cats for ages) have a picture of Harvey, our largest and scarediest moggy, in "is it safe to come out yet" mode, while I spend the weekend drinking, worrying and telling myself that other people are worse off than me. 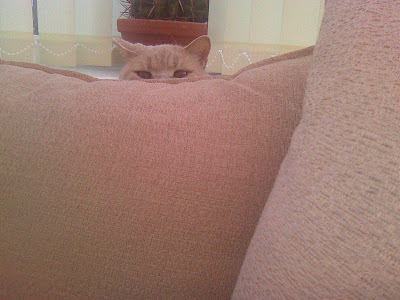 Alfie Patten is said to be "extremely distressed" that he is not the father, after all, of the little girl born in February to a 15 year old girl.

Given that he is 13 years old and yet has been told and lectured by all and sundry about his responsibilities as a parent as if he were ten years older, I'm not surprised he is distressed. He had probably just got used to the idea that the child was his when DNA tests revealed that the girl had, in fact, conceived the girl with a boy of her own age.

This doesn't rectify the situation for anyone. Two 15 year olds having sex is wrong, and especially when they have clearly had little or no information before them about the consequences.

But a boy barely out of short trousers, only just a teenager, has now got to deal with the fact that after all the adverse publicity, all the sanctimonious crap from commentators and politicians, all the criticism undoubtedly aimed at his family, that he isn't a dad after all. And, pray, perhaps he should be afforded the same sympathy as any adult would get at the news that someone he was infatuated by should treat him in such a way.

He has had a lucky escape in one obvious sense. But it's as obvious that this experience could tarnish him for the rest of his life. His family must be relieved and yet incredibly angry. The 15 year old mother must feel decidedly foolish too.

Presumably all the press and the authorities had as evidence, prior to leaping into action in reporting, condemning and making a fuss of the whole sorry business, was the word of the young mum. She said it was Alfie's, and away they went. The DNA test would just make a new story later, irrespective of its result.

The kids involved - the mother, father and phantom father - have youth and immaturity to explain away their mistakes. The adults involved have no such excuse. And at the end of it all is a baby who is going to grow up knowing that she was an accident caused by two children barely out of nappies themselves and whose very existence was allowed to be condemned by a society that knew everything and did nothing.
Authored by Matthew Rudd
Email ThisBlogThis!Share to TwitterShare to FacebookShare to Pinterest
3 exclamations of response

On my way home in driving rain yesterday afternoon, the traffic on the dual carriageway ahead of me suddenly started to slow and pull up. The car at the very front had its hazards on; another behind it was trying to overtake it. Both were going at a very slow pace.

As I pulled up behind I could see why.

There was a dog in the road.

This animal was ambling along at a canine canter, oblivious to the danger it was in. One by one the cars began to slow down. All it would have taken was one animal-hating lunatic - and they exist, certainly - and the poor creature would have been a goner but hey, the loony would have been home for his Sunday dinner on time.

Nobody seemed to know what to do, though this was probably dictated as much by the downpours as it was by the prospect of trying to befriend a stray dog and remove the danger to itself and the road users.

So instinct took hold of me and, despite wearing nothing on my top half other than a T-shirt, I stopped the car, flicked on the hazards and got out, running towards the dog. By now it was going to the central reservation - which was essentially a pavement in the middle of the road with no barrier. It was potentially five seconds from meeting its maker thanks to an undelayed vehicle coming the other way.

While getting bemused (and, I must say, grateful) looks from the drivers and passengers of the other stationary cars, I ran across the road and did the kissing noise that attracts animals to human attention. The dog turned round and I knew straightaway it was a stray or had been abandoned or got lost. It was a collie cross, scruffy and soaked but affable enough to come to me at the first signal.

Despite its hideous outer condition, and also not knowing how it would react, I instinctively picked it up and walked it back to the pavement, deliberately doing so along the road - I was like the traffic-calming man of the 1920s, except I was holding a dog instead of a flag - part of the way. This was because the pavement had railings against it and I had to find the end of the cordon before I could leave the road and join it.

Once on the pavement, I put the dog down. It didn't struggle or complain or get aggressive at any point. It didn't even seem scared, and I know a frightened dog when I see one. I then walked the safe way on the pavement, beckoning it along with me, so it couldn't just run out into the road again. We walked together until I got back to my car, then I leapt over the fence and drove off, with cars caught further back looking at me as if I was mad. They clearly were too far back to see why I'd got out of the car and briefly delayed their progress.

In my mirror I could see the pooch carry on, jauntily, and in the correct direction, at the mercy of the weather but enjoying the safety of the footpath.

I could have taken him to a police station but none are manned on my patch on a Sunday and plenty of people do let their dogs out on their own, knowing they'll come back again. This one shouldn't have been on the road, but its weight and docile nature suggested to me it was used to human attention and therefore wasn't sleeping rough and scavenging, and therefore less likely to be more self-protective. And I couldn't have taken it home as the Bassets would never have allowed it into their kennel.

I hope I did the right thing in just letting it wander back to where it came from. I'm still not sure, but at least I was prepared to get soaked to the bone in order to make sure some bastard didn't run over it.
Authored by Matthew Rudd
Email ThisBlogThis!Share to TwitterShare to FacebookShare to Pinterest
3 exclamations of response