I only take ten days of holiday a year so I really should bang on about them more often. This, however, presupposes that there is anything to bang on about. I've had a lovely time in France, a country I adore, and that should be that. It usually is.

Yet having just had a scan through the photos on my mobile phone, I feel I should share my idiosyncratic holiday snaps with you. This is how rubbish a tourist I am - I don't use a proper camera, but a basic one on a Nokia cellphone. This is despite taking my smart Casio Exilim camera with me, complete with sticky tape on the battery case. I didn't remove this camera from its small compartment of my suitcase at all during my sojourn. And, as if this weren't ridiculous enough, I only take pictures if I think they are worth uploading to my blog, which is a risky business in itself. Anyway, in for a cent, in for a euro, so... 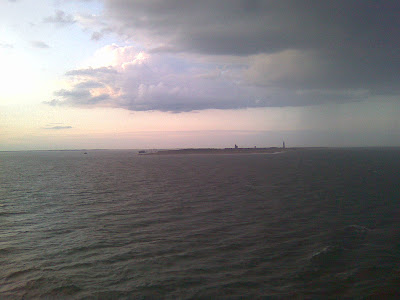 The earliest possible holiday snap I could take, really - it's Spurn Point at dusk, snapped from the outer deck of our ferry as we rolled across unchoppy waters to Belgium. I'm quite pleased with this pic, actually. I've not seen or been to Spurn Point (the tip of land which marks the end of the Humber and the start of the North Sea) for years, even though it's fewer than 20 miles from where I live. Even though we've done this seafaring route every year for the last eight, we always seem to be inside the ferry, probably dining or shopping, when Spurn passes by and as luck would have it on this occasion, we'd gone for some air just as the last crumb of British soil came and went. Spurn isn't a village and has nobody living there, just some nautical furniture, but is a public place, and great to visit for beach walking or fishing. It tends to disappear for periods and then, just as ecological experts claim it's gone for good, re-appear via the miracle of nature. There isn't much there but I would claim that you feel like you are standing on somewhere vital and riddled with destiny when you have one foot on the Humber bed and the other on the North Sea bed. Your atlas might call it Spurn Head but to Yorkshire folk it's Spurn Point and always will be. I'm now determined to take the dogs for a run there. 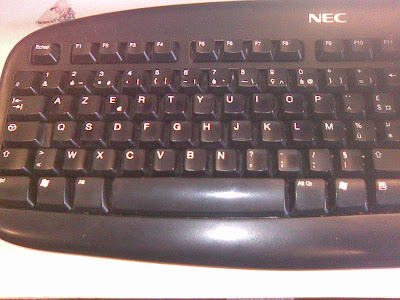 Using a French keyboard is a real pain. This is the one in the library at La Souterraine and, with no net access at the secluded house where we stayed, I nipped along twice during our break to check emails in case of work offers for when I returned home (and there were two such emails, yippee!).

First up, and most obviously, there are six letters in totally different places to where we would normally find them. This is something one can cope with after a few minutes, though British-trained touch typists (I'm not one) must be at the point of ripping up their RSA certificates at the frustration of having their speed challenged by this. If, like me, you rely on two fingers and staring at the keyboard throughout your bashing session, you soon learn.

What intrigues me more is the way the top row is set out. Correctly, they have individual keys for the various vowels that require specific accent marks, plus a 'c' with cedilla attached. The numbers, however, are only typable via the Shift key. This is something you forget easily, believe me. And, look at the @ symbol, underneath the figure '0'. This is only achievable via Ctrl and Alt. I found this out by chance, but someone like my mum, for example, would spend her allocated 20 minutes at the computer unable to send her email because she couldn't find the crucial symbol required for the address. Meanwhile, the apostrophe and exclamation marks didn't work at all.

Of course, these keyboards are designed for French people, not whining British tourists in ill-fitting bandanas. I know this. Doesn't stop them being bloody hard to use though. 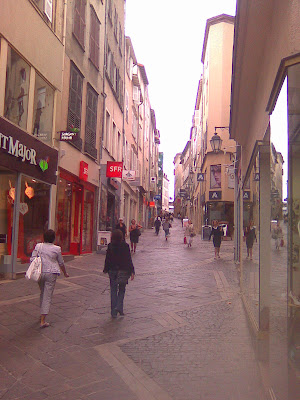 A shopping side street in Limoges, the nearest major city to our holiday home. Typical of all French cities, Limoges manages to combine a meticulous mix of hustle and total focus on the more important things. So many shops close on Mondays, there will never be Sunday trading in France, and the non-eaterie establishments all put their FERME signs up at 12.30 and go off for galettes and coffee for two hours. And despite all this, they do brisk and healthy business. Does the contrast between French and British trading habits say anything? Are our businesses treated shabbily by the authorities and forced to work harder? Or are we just greedier as a country?

Limoges is a beautiful city. They value their ageing architecture and prefer to redevelop older buildings rather than bashing them down with a concrete ball and starting again. The traffic is unrestricted by speed bumps or complicated one-way systems (you've got to drive round Hull's to believe its mega stupidity - even Rik Mayall made mention of it when performing the stage show of The New Statesman there), there is a fab tram system aided by screeching power cables ten feet above your head, the railway station is a masterpiece of architecture and the parking is free. Entirely free. Car parks, side streets, all free. Name me one English city which offers its shoppers and traders free parking anywhere. 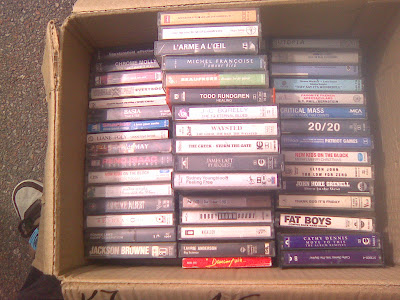 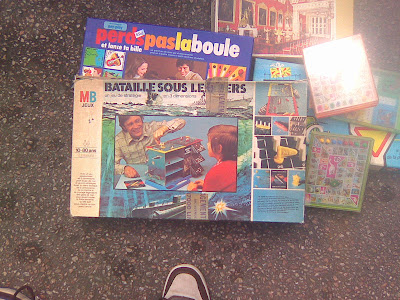 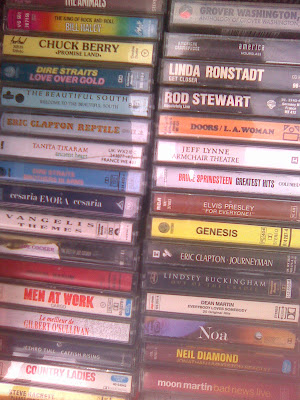 Ah yes. We went to an antiques and bric-a-brac (ie, tat which nobody can sell) fair in Limoges one day and within all the dog shaped cream pitchers, moth-eaten chairs and Spanish flamenco posters from the 1950s were the occasional box of cassettes and other examples of more modern popular culture. These photos were taken entirely with F-C and Phil in mind, and I shall say no more. 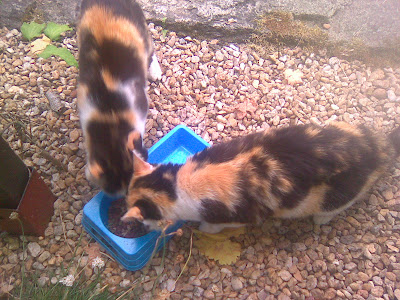 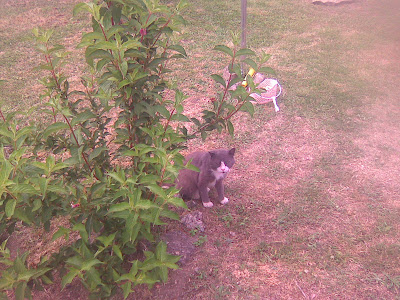 The cats. These are, we assume, farm cats from across the way who have noticed lately that warmer months bring people to the otherwise empty house nearby and with people there is the opportunity for extra food and general scrounging. The two tortoiseshells are mother and daughter, with mother again expecting a litter and daughter devoid of her tail after an accident. The silver grey cat is like one you've never seen before - getting old now, he has evidently lived his whole life outdoors and is covered in permanent scars, scabs, scrapes and abrasions - indeed, if you imagine what Tom (as in Jerry) looks like after Butch has given him a beating then you've got the real thing here. He probably houses every brand of parasite in existence within his fur and adopts a rather cynical expression whenever he approaches, even though his whole reason for associating with you is to get food. Unlike the tortoiseshells, he is not keen on being stroked - not that you'd wish to - and is used to fighting and defending himself and appearing ungrateful and ungracious. He is still in possession of his masculinity and it goes beyond comprehension just how many kittens he has probably fathered in his long life. Despite all this, he's a cat like any other and the house he visits is, to his good fortune, in the name of a family of cat lovers, so he will always be fed.

We stopped over for a night at Alex's place in Normandy on our way back to the ferry but the only pic I got was of the black powder within a jar of Nescafé which was more than two years out of date. We were too busy drinking, eating barbecued food and listening to his stories to bother photographing anything else, though nothing quite became our visit as much as our exit, when we promptly drove over some freshly-laid tarmac while a pleading French workman on a steamroller yelled "Non! Non! Non!" at us, in vain. Should have diverted the road, shouldn't you?

So there you go. That's how I do holiday snaps. I'm sure it's better than a picture of me sitting on a wall eating a Cornetto.
Authored by Matthew Rudd
Email ThisBlogThis!Share to TwitterShare to FacebookShare to Pinterest
5 exclamations of response

In these arms again

Hello, hope you missed me dearly. Ten days of eating galettes, translating L'Equipe, walking plentifully along pavementless main roads (and being hooted at by French van drivers for doing so) and reading Wuthering Heights, and I'm back home.

Yes, it was divine, thanks for asking.

Give me chance to unpack and collect the dogs from the kennels in the next village and I'll be back with you. Have I missed much?
Authored by Matthew Rudd
Email ThisBlogThis!Share to TwitterShare to FacebookShare to Pinterest
6 exclamations of response