Been a weird week, this. Had a good stint of breakfast shows on one station, suffered a big setback with another that really gutted me, then got some good news about a third just this morning. This industry I'm in is so damned unpredictable.

Other good news from the world of broadcasting is that Alex now has a weekly podcast, and his second one is due online today. I downloaded the first on Monday and found myself laughing out loud while on the treadmill, which induced both strange looks from fellow fitness seekers and shortness of breath from me. If your experience of Alex is restricted to his depping sessions on daytime Radio 2 shows, then you really must hear what he normally gets up to...

Football, gym, nightclubs and radio this weekend, as ever. Have a good one.
Authored by Matthew Rudd
Email ThisBlogThis!Share to TwitterShare to FacebookShare to Pinterest
0 exclamations of response 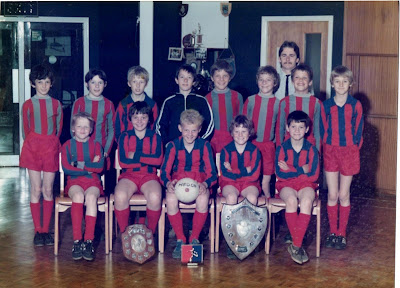 Hedon County Primary school's football team, 1981-2. There's me on the left of the front row with one sock lower than the other and a digital watch, the staple fashion item of all primary school kids in the early 1980s, still on my wrist.

This was the first football team I played for. I was eight years old when I was picked to play at left back in the team and was pretty proud as only two other lads in my year were selected. I was the youngest by a good few months but not the smallest - look at Steve Platten, the lad with the large shield in front of him. He was smaller than me, a year older than me and a genuinely talented footballer who ended up being offered YTS terms by Hull City when he was 16.

From what I remember, school football at both primary and secondary level relied on cup competitions to provide serious games for the youngsters, while also playing plenty of friendly matches. There was no league, that I can remember. We were a good team for a bunch of eight to 11 year olds and reached a few of the cup finals, though never won any. Don't be fooled by the trophies on the photo - they were won by other teams at the school and were just placed in the photo to make us look good, while the one in the middle was our own Man of the Match trophy, in the team's colours.

The most memorable final was in a competition called the John Chignall Cup (I know this as I still have the certificate, but I've no idea who John Chignall is/was), which held its final at a neutral venue in the area. The deputy headmaster (not the head himself, who was an anti-sport, child-hating tyrant) suggested to the various year assemblies that maybe they'd like to go and support the team, and sent letters to parents informing them of it.

Before we knew it, two coaches had been booked because of demand, and so while the team travelled on a minibus to the venue, half the school was following as we headed for Driffield for the final.

Our opponents, from a primary school in Cottingham (a very large village immediately north of Hull) took an early lead. Our goalkeeper, Kirk "Yashin" Hudson, is someone I've seen a few times recently and he recounted the goal as if it were yesterday - he acrobatically pushed a shot on to the crossbar and a scrounging striker followed up to head in the rebound.

In the second half, we pushed and harried and both the captain Jeremy Ruffle (who I think later emigrated to Canada) and I had goals disallowed. I had been put upfield as a further attacker but was called offside as I stuck the ball away. My dad and both grandads were in attendance and all three reckoned the referee conned us, though on reflection maybe they were just being polite to a gutted nine year old lad, as we never did find the equaliser and lost 1-0. I should have timed my run better, as I'd learned about offsides meticulously while playing at left back - again, I have the talented Platten to thank for that. Being taught the offside law by a ten year old is fine when you're only eight.

Some of the players on the photo then left for secondary school and Mr Abbott, our teacher in the photo, had to begin the process again with the players who stayed behind and new ones emerging from the years below. The team was never quite as good though, even as we grew older, fitter, stronger and more aware of how to play the game.

You may notice that the shirts differ slightly in shade and quality. This is because only half a batch was ordered to replace some of the older shirts which had become too frayed and unwearable. However, some more of the older shirts survived, as you can see, and indeed continued to be used for the two further years I spent at the school and in the team. The general consensus was that the eldest boys, the fourth years, got first refusal on the newer shirts, the ones with collars, but looking at the photo and knowing the ages of each lad on it, that obviously didn't always apply.

Paul Kelly, poor lad on the far left of the back row, is wearing shorts that look considerably too big for him. All the shorts were this size, so heaven knows what sort of mutant primary school kids the manufacturers assumed Hedon had when they were first made. Paul was in my year and a good deal taller than me, so I am fortunate that my seated position hides just how bad I looked in equally vast shorts. A serious gust of wind could easily have floated me away.

Although we had a minibus for that cup final, most of the time we'd all pile into Mr Abbott's car for the short away trips to schools in neighbouring villages. We'd get changed prior to setting off in order to save on luggage space and it provided the difference between getting a full quota of 12 or 13 lads into the car and not. Unbelievably, Mr Abbott drove a 2CV. A blue one, in fact. And all of us managed to get into it. Some of us were very small, remember. The Health and Safety people would have a fit today, but back then even drivers didn't have to wear seat belts, never mind passengers.

I carried on playing football until I was about 15, both for school and for Sunday League teams, but my early promise as an eight year old didn't develop much and by the time I stopped playing I was very, very average indeed. I haven't played much in adulthood due to a couple of ankle injuries, yet only yesterday a mate who runs a Hull City supporters' team put an appeal out for players for a game this weekend as he was short of them. I have thought about it, as I loved playing, but at 36 and with limited fitness I'm too wary of being crap.
Authored by Matthew Rudd
Email ThisBlogThis!Share to TwitterShare to FacebookShare to Pinterest
0 exclamations of response

"I must have kept on dragging through the business of the day..."

The Day Before You Came by Abba. As un-Abba as you can get when you look at their career really, given its understated, monotonous progress as it appropriately charts the mundane life of someone profoundly lacking excitement.

It captures an affinity with ordinary life that must come difficult to most pop superstars, with all the references to trains, offices, watching trash on television and listening to the night-time rain after turning in. But in 1982, when this was released, Abba were dying as a band, having gone through their brace of divorces over the previous two years and therefore making them no different to millions of other warring couples.

Maybe it isn't remarkable that the two Abba couples managed to maintain a working relationship and a amiable terms for as long as they did. Many couples stay on reasonable terms after the end of their marriages. Yet these two marriages were such an endearing part of one of the most high-profile, successful showbusiness stories and the world was there to watch them collapse. Abba's reaction was to do The Winner Takes It All.

So, The Day Before You Came then. It's Agnetha singing about the functionalities of life that so many people have to endure - getting up, going to a workplace that does not inspire, relying on public transport and getting back to a home with nobody to greet you. What makes this song brilliant is what it lacks, not what it has, and this is the most un-Abba thing about it - there is no chorus. Three straight verses which build the story up, and by the end you're wondering exactly when the next day, during this vicious tedium the storyteller relates, the person who will save her from herself will turn up, and what he will do.

And, of course, there wasn't a single episode of Dallas that she didn't see, apparently. Especially in the early 1980s, when JR had been shot and then in the next series, we waited to see for ages whether it was Pam or someone less significant in that swimming pool. Not sure it would have had the same effect had she spent her singleton years obsessed with Mog or Gems, really.

As good as this song was, the combination of Abba's disintegrating shelf-life and its lack of familiarity with the Abba sound curtailed its progress and it only got to No.32 in the UK charts. Evidently Abba were on their last legs, though it wasn't until a year later that it was confirmed.

The video crosses between the two days, with Agnetha sometimes smiling at her beau-in-waiting while flashing back to his absence the day before. She seems to have the most picturesque journey to work possible prior to a car journey in the rain, without seat belt, that offers no obvious explanation (unless she drives to and from the station each morning).

The rest of the band get to stare moodily at the camera for a brief spell during the third verse (something Benny simply can't carry off properly while sporting that beard) before we return to the platform as the train disappears, wondering whether the man of Agnetha's dreams had made it to his seat or not. Most of the video is inconclusive, save for one obvious thing - Agnetha with those light curls was probably at her most completely gorgeous.

People remember fondly, and with good reason, the joyous version that Blancmange released in 1984, reaching a respectable No.22. For reasons known only to themselves, they opted to alter the identity of the bedtime author to Barbara Cartland from the feminist writer Marilyn French. If one assumes Neil Arthur wouldn't have ever read a French novel, it's equally hard to imagine him settling down with one of Cartland's treacly tomes. Maybe that was the point, and it's the sign of fine composition that one can find a point in a song so obviously about life's pointlessness.
Authored by Matthew Rudd
Email ThisBlogThis!Share to TwitterShare to FacebookShare to Pinterest
7 exclamations of response