My old blogging adage - if you've nothing to say, say nothing.

Or alternatively, bung on the latest cute pics of your cats. Sox, bless her, just likes to spend her day asleep on a dining chair while the three lads get up to all sorts, though that still mainly involves closure of the eyes. So... 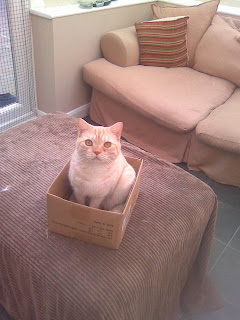 ... something is delivered to the house, and Sidney finds interest in the leftover packaging. Then... 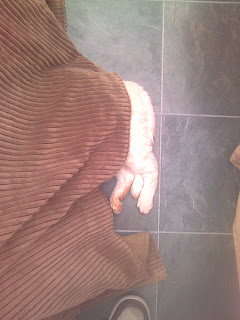 ... he gets tired of boxplay and goes to sleep under the pouffe, sheltering his eyes from the sun. Meanwhile... 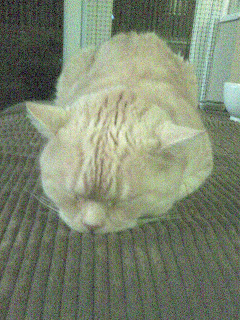 ... we get close-up to a dozing Oliver as he does his uncanny impression of a dragon. And... 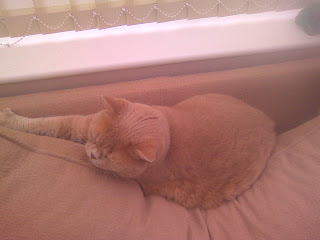 ... Harvey, who weighs more than a stone, manages to sleep deeply (and snore loudly) without falling down the back of the settee. Finally... 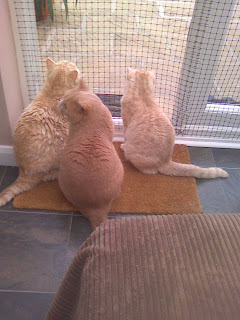 ... the three boys wake together as something fascinating hops about on the patio at the other side of the door. Careful chaps, you know what curiosity did...

It's a cat's life.
Authored by Matthew Rudd
Email ThisBlogThis!Share to TwitterShare to FacebookShare to Pinterest
2 exclamations of response 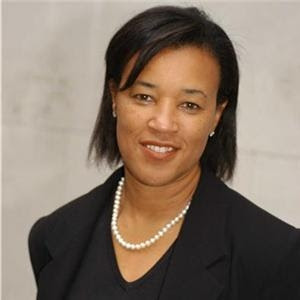 Am I the only one who thinks that not sacking an Attorney General who has broken the law is beyond scandalous?

Baroness Scotland drew up the laws on hiring illegal immigrants and then promptly broke them by, er, hiring an illegal immigrant. She's been fined £5,000 - half the maximum amount - but stays in her post. Her credibility in the job has been shot to pieces. Every speech she makes about law and order will receive the same response about her own peccadillo. She'll be a laughing stock.

That she hasn't chosen to resign herself is barely a surprise, given that it would be an honourable thing to do and few politicians these days display any characteristics of honour. But that Gordon Brown hasn't chosen to fire her (or at least tell her she has the chance to resign before he does fire her) - well, to be honest that's no surprise either. Presumably his Cabinet Secretary told him, a la Hacker and Appleby, that it would be "a courageous decision".

I despair of this wretched bunch of dishonest, selfish, dictatorial, unscrupulous charlatans we have in charge. When is the election?
Authored by Matthew Rudd
Email ThisBlogThis!Share to TwitterShare to FacebookShare to Pinterest
2 exclamations of response 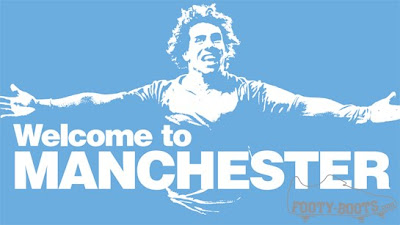 There are a few things I dislike about Manchester United fans, and the paucity of Mancunians among them remains the main one. However, during yesterday's Manchester derby (an awesome game), another reason reared its head.

Manchester United fans cannot forgive anyone for daring to hook up with a deadly rival after leaving their own club.

Carlos Tevez, a run-through-brick-walls Argentinian, was an outstanding player for United over his unique two-year loan deal. As far as I understand it, he wanted to join the club permanently, and even gestured to the directors box at Old Trafford about it when he was substituted in his final game last season.

The club chose not to pay up, despite patently being able to afford him (especially once that hateful, narcissistic, infantile, cheating Portuguese turd left for Madrid) and so Tevez looked for what else was on offer and joined Manchester City. It was a sporting and professional decision. And City, feeling that they had carried out a rare trumping of their more successful rivals, put posters up around Manchester with Tevez thereon, saying 'Welcome To Manchester'.

Tevez subsequently got all sorts of abuse from the Old Trafford faithful yesterday. Yet those blessed Stretford Enders surely knew that the departure of Tevez from their club, and then the poster campaign, was nothing to do with him? Or do they not mind looking thick as long as they manage to look aggressive and make a point that is unhelpful, inaccurate and inhuman?

Someone chucked a coin at Tevez as the players left the pitch at half time, and duly hit someone else, someone innocent (though had they hit Tevez, they still would have hit someone innocent). Well done that person. A top afternoon's work all round, clearly.

Meanwhile, Mark Hughes was also yesterday treated with not great kindness by the Old Trafford faithful, specifically those in the stand behind the dugouts. He was one of their greatest players who served the club with distinction over two spells in the 80s and 90s. He scored spectacular goals, crucial goals, late goals, trophy-winning goals. He was also sold by the club when he didn't want to go. But now he is carving out a promising managerial career and currently holds the position at Manchester City, so naturally he is called all the names under the sun.

These berks don't seem to realise that if Hughes has any kind of success, it is probably not going to be at United's expense, and will give him the chance of taking over at Old Trafford when Sir Alex Ferguson drops down dead on the touchline (which he will, as it's simply inconceivable that he will ever retire, despite all the noises about 2012, or whenever). And no matter what Hughes does on one side of the city, the biggest job is on the other - and the only way he wouldn't take Ferguson's job, if offered, is if he thinks the crowd that once adored him has now turned on him for daring to pursue a career somewhere nearby.
Authored by Matthew Rudd
Email ThisBlogThis!Share to TwitterShare to FacebookShare to Pinterest
3 exclamations of response