"You say you'll change the constitution, well you know..."

After a court ruling, the BNP has been told to make a constitutional change to allow black and Asian people to join up. Then someone I know came up with this brilliant, if entirely unworkable, idea...

Every black and Asian adult in the UK should join, then democratically overthrow the leadership before quietly (or, even better, very noisily) disbanding the party.

It would never happen for several reasons but it's a great thought in theory.

Meanwhile, I'm all for that bombastic arse Nick Griffin's appearance on Question Time next week, just to see the git taken to the intellectual cleaners.
Authored by Matthew Rudd
Email ThisBlogThis!Share to TwitterShare to FacebookShare to Pinterest
4 exclamations of response 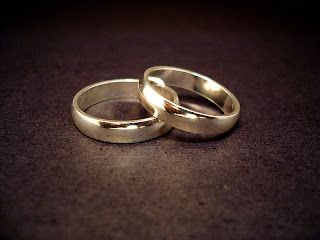 If there's one blog post you read this week, it's Alex's account of the wedding of our pal John Foster that he attended at the weekend. Determined to go "off-list" with his gift, he consulted his million Radio 2 listeners and ... well, the results are detailed here.

I've been to a few weddings - three this year alone - but had only ever attended one up to the age of 21. I count my blessings for this, as some weddings can be stupefying, although the trio of 2009 nuptials that have had my name on the guest list all were anything but.

The solitary wedding I attended in childhood was that of my mother's rather eccentric cousin when I was eleven years old.

It was at Hull's eastern branch of the Mormon church (leave your jokes about 47 Brides for Seven Brothers at reception, thanks...), a fact that passed over me at the time. Peggy, for that was (and is) her name, was getting married quite late in life and then promptly moving to Basingstoke. I personally have never seen her since, as she never attended subsequent funerals of my maternal grandparents (her aunt and uncle) or many other relatives on that side, which disappointed my mum considerably. My parents have seen her though, again in funereal circumstances for Peggy's own parents, whom I barely knew. I am told that she sang at one of those funerals, which suggests exactly the sort of personality we're talking about here.

My memories of 1984 that matter - school, football, pop music, good stuff on telly, Nicola Turnbull - are excellent, but of this wedding I mercifully can't think of much. My aunt has a little photographic record of it though, as her two lads, my cousins James and Philip, were the youngest boys in the family and so Peggy asked (or, more accurately, demanded) that they become her page boys. The lads were eight and five respectively and therefore not blessed with the wisdom to object on coolness grounds, but their mum had cause to object when told exactly how they should be dressed for the role, and that the expense would not come from the wedding kitty but her own pocket.

The lads were in traditional page boy garb, all white skin tight garments with tights and pumps and a light blue cummerbund. Even though they were very young, I'm half-surprised that they didn't look at themselves in the mirror upon the first fitting assignment and tell their mother in unbroken voices exactly what Auntie Peggy could do with her page boy clobber. They looked cute and traditional, yes. But kitsch simply doesn't cover it, even for the 1980s and even though their extreme youth meant they wouldn't be held responsible. The images of the day were doubtlessly going to haunt them as they got older though, and the photos are now among the more famous of the family album.

As the next eldest child, I was the odd one out on the day with no specific role to play except to not be a nuisance. I hope I succeeded. My brother, the eldest of the lads, was 14 and was assigned ushering duties, resplendent as this teenaged heavy metal fan was in a striped shirt and white tie. It was the first of many millions of occasions my beloved father was able to use the "his job is to tell people to 'ush 'ush if they're talking too loudly" gag, and I never get tired of it. No, really.

Peggy and her bridegroom Barry, a nice enough chap who didn't seem to say much, were married with surprisingly little fuss, though maybe I've managed to erase the bad stuff. All I clearly remember of a ceremony otherwise mercifully unetched on my brain was that the kiss was a minor peck, not the all out tongue-sandwich which television weddings always seemed to produce. Of the subsequent meet-and-greet gubbins and reception I have no recollection at all.

And, as I said, I have never seen Peggy since. She and her new husband skedaddled to Basingstoke and very quickly had two children, presumably because the biological clock had ticked into time added on for stoppages. The only time she has returned to her home city since, to my knowledge, were for the funerals of her parents and yet news of a handful of other close family demises were dutifully sent her way, with rarely an acknowledgement and never attendance at the funeral. My mum and others have always been a touch peeved about this.

Yet every festive season we continue to get what my late grandma used to cuttingly (and very wittily) call "The Epistle according to Saint Peggy". A Christmas card would suffice, and even then we'd not be surprised if one failed to materialise, but instead every year a short (but not short enough) biographical account of the year gone by is posted out to members of the family, which essentially permits Peggy to talk about herself and all her smashing achievements of the past 12 months with total lack of awareness or interest in anything or anyone else. Christmas actually isn't the same without it, in a way; nor is the temptation to not actually read it but quietly file it away...

The wedding of Peggy and Barry was possibly not the worst I've attended (though I'm not going to spend forever deciphering which one is) but it's one of those where you have to go, irrespective of your opinion of the person who invited you. I suppose that's what family is all about. But when thinking about the first wedding I ever attended, I do still cringe for my cousins, now smashing young men of substance and decency, who have those photos on their record for life, and count my blessings that I was able to wear a white shirt and maroon tie and just smile a bit.

I know I'm likely to be attending an all-out Gothic wedding in about two years' time. Now that's one I wouldn't miss for the world...
Authored by Matthew Rudd
Email ThisBlogThis!Share to TwitterShare to FacebookShare to Pinterest
0 exclamations of response

"Though your dreams be tossed and blown..."

You'll Never Walk Alone by The Crowd, easily the most dimly-remembered charity ensemble record of the 1980s, even though it did get to number one. Recorded to raise funds for the appeal launched after the Bradford City fire of 1985, it featured a heady mix of chancers, has-beens, mates of mates and the odd TV megastar.

Gerry Marsden opens it, as you would expect, and then up pops Tony Christie. We then get the Nolan Sisters in all their hairsprayed glory before the ensemble of some quite surreal names sings together, conducted by Graham Gouldman. Gary Holton, who would would die later the same year, had presumably had one of his heavy nights as he was wearing his shades indoors, while we also got Dave Lee Travis in the first flushes of greying beard and Bernie Winters in a jumper.

Jim Diamond, a fine singer, ends the chorus with that wonderful unique voice of his. Before him is a bearded semi-operatic bloke whose identity I can't decipher. It could be Renato of Save Your Love fame, but both my brother and I managed to convince my beloved father at the time that it was Geoff Capes ("by heck, he's a good singer!").

I love the utter surrealism that comes with the shot of Lemmy really belting the closing chorus out, while standing in the same room as Kiki Dee, Rolf Harris and Kenny Lynch. There isn't much more to say about it; the ridiculousness of the cast list sums it up beautifully.

It got to number one in the summer of 1985 and raised a tidy sum, but the money ended up going to the local burns unit as the appeal had closed by the time the cash was acquired. A six-figure chunk had to be creamed off because the publishers scandalously refused to donate their royalties, and Marsden later got heavily (and harshly) criticised for "using football tragedy to further his career" when he turned up with some fellow Scousers at another studio to do Ferry Cross The Mersey after the Hillsborough disaster four years later.

Liverpool fans still sing You'll Never Walk Alone as their final ritual before kick off at every home game. And still the television stations turn the sound up on the Kop to make it sound louder than it actually is...
Authored by Matthew Rudd
Email ThisBlogThis!Share to TwitterShare to FacebookShare to Pinterest
6 exclamations of response