I shall be starting a new job in January. Yay!
Authored by Matthew Rudd
Email ThisBlogThis!Share to TwitterShare to FacebookShare to Pinterest
4 exclamations of response 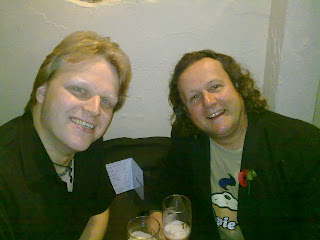 It's Alex and I, across a corner table at a bar called Scrooge's in Blackpool, where we and our regular group of compadres met for the latest Nerd Night.

I've never had a night out in Blackpool before. I've been five times in the past; four times for football matches, and in those instances it's always a case of park up, find the pub, go to the game, watch it and - invariably in my case - leave as quickly as possible after an inept defeat. The other time was for a photo session.

So it would be a new experience for me as I hopped off the teatime train that took me into the town and dragged my sorry self through the biting November gales to the Travelodge where most of us would be staying. A few phone calls were exchanged as we established where we all were.

Now poor Charles Nove, of Radio 2 and the esteemed deputy voice of the balls, had a dilemma. He had chosen to drive up from London but discovered upon arrival at the nearest car park to the hotel (which didn't have its own parking facilities) that it would cost £13 for an overnight stay. Fine, except it didn't accept a) credit cards; b) notes; and c) £2 coins. This meant he had to have £13 in pound coins and lower denominations, something which you only have in Blackpool after a few hours in one of the amusement arcades.

Eventually, a loose plan was hatched to meet in the hotel bar at 6pm for a few warm ales (Travelodge fridges never, ever work) prior to another pub and then our restaurant booking. Suitably refreshed and suited, I was just reaching for the door handle to exit my room when I heard this astonishing groaning noise from the corridor.

Briefly, I paused. I don't know why - it may have been that I was about to walk in on some hotel spook (which was unlikely because Hallowe'en was a week earlier, the hotel was too new to be haunted - oh, and because ghosts don't exist) and shivered a little. Then I regathered my sanity and opened the door, just as another large groan - and this time I established it was female - sounded.

Very quickly, as the groans increased in speed and volume it soon dawned on me what was going on. In the room almost directly opposite, a woman was privately pleasuring herself but a combination of her obvious skill and the criminal thinness of the walls meant her shrieks of enjoyment could be heard down the whole bloody corridor. I was not perving in the slightest; I had no choice but to hear (note: I heard, not listened - thanks) as I walked past her room and even as I went through the exit door and called the lift to my floor the noise continued. I swear I heard one last groan as the lift door closed and I began to head down to reception. The recorded voice saying "stand well back" seemed quite appropriate.

Anyway, I made it to the bar, took a lukewarm ale to the table and one by one the other chaps arrived. I related this story to each, and wondered how on earth we were going to top that in Blackpool, having not even left our chain hotel. Fortunately, while carnal exclamations of invisible people were not audible at any other stage of our evening out, we did have a lot of fun.

Regular readers of this blog (I know, a contradiction) will know what goes on at these evenings. A bunch of us meet up, drink, eat, drink some more and chew the fat about the radio industry, swapping anecdotes and stories and exchanging the sort of gossip that could trouble the Official Secrets Act.

In our first pub, the nerdishness of the occasion was quickly established by my pal Martin, who had uncovered, edited and saved some of Charles' past audio as a presenter of Radio 2's nightshifts back in the day when records were played on a horned contraption that had dogs peering down them. These clips were stored on his phone, complete with jingles and stabs, with only the music removed. Charles listened intently, quickly identifying the makers of the jingle package. This sort of stuff thrills radio professionals and quickly bores everyone else. I therefore shall move on.

On to the restaurant we went, which was a traditional English place and absolutely superb. They looked after us really well and the food was exquisite. We seemed to stay there quite a while, allowing the two waitresses to lean on the bar and laugh along at some of the tales told by especially Alex and Charles, the two more grizzled pros among us. The tale of the (very well known but not massively bright) presenter who went to the lavatory during a commercial break, forgot he was on air and got in his car and drove home had us in hysterics for quite some time. Usually with on-air mishaps most jocks can say "we've all done it"; however, I can categorically claim not to have ever forgotten I was doing a radio programme after that programme had started.

As we exited the restaurant, the waitresses' local knowledge helped us to our next bar, the aforementioned Scrooge's (the directions were "across the road, past the knocking shop and it's round the corner", which I doubt you'd get from Tourist Information). The alleged knocking shop was obvious as there were lights of a certain colour gleaming through the half-closed blinds (and a flourescent sign saying 'OPEN' which I thought was a bit of a giveaway), and we duly made our way past said house of questionable repute and happened upon our next bar.

This was a country-themed pub with black T-shirted bar staff and I loved it. It was exactly what we needed, as our combined age and wish to converse fairly normally with one another meant we didn't want to go somewhere with loud music. The stories continued to spill out and the ale continued to flow. As the Bellamy Brothers played on the speakers, we continued to relate and digest our tales of the industry before realising we were last ones there, with the music long stopped and last orders long called. We hope if you were a patron of Scrooge's that evening that we didn't bore you too much.

On to the Ché Bar, which adjoined our hotel. Simon Hirst had previously acquired us free entry to this place as he is mates with the owner, both from Barnsley. However, this piece of information didn't seem to have been handed to the fantastically bored girl at the pay desk who, after five minutes of spoon-fed information from the patient Hirsty, claimed she didn't know who her manager was nor who the big boss of the whole chain was, or indeed where her arse was in relation to her elbow. The doorman, evidently someone who had despaired of this colleague of his on endless occasions, took pity on us and shouted "Oh, just go in!"

But we didn't stay. It was loud, the floor was horribly sticky and the atmosphere didn't quite feel right. Mr Brightside by the Killers does sound fantastic in big speakers though. We wandered round this front bit, wandered into the back bit (The Key, The Secret by Urban Cookie Collective) and then wandered out again, carefully choosing an alternative door so the disinterested girl and the benevolent doorman didn't see us exit a mere minute and a half after finally persuading ourselves in.

There wasn't much after that, so it was a return to the hotel bar and more tales. I retired to bed after about an hour and can report that the corridor was blissfully silent when I emerged from the lift and headed, weary and drunken, towards my room. However, I had been given a room right above the Ché Bar smoking shelter, meaning there was still much noise to be had directly outside my room but far less appetising than previously, given that it consisted mainly of swearing and drunken giggling. Some of us are older and need sleep, goddamit!

It was a top night, as confirmed by all when we met for breakfast the next morning at various stages of the bleary-eyed, sore-bonced recovery period. I was on my train out of Blackpool by 10.45am. If you were in Room 326 of that Travelodge, congratulations on your achievement.

Brighton next. Heaven only knows what awaits us...
Authored by Matthew Rudd
Email ThisBlogThis!Share to TwitterShare to FacebookShare to Pinterest
3 exclamations of response