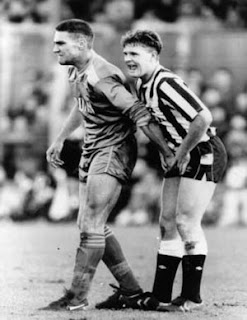 I haven't watched even a minute of this year's Celebrity Big Brother, but even I know that Vinny Jones is going to win.

Vinny is a classic case of the lucky lad who twice was in the right place at the right time. He impressed Wimbledon manager Dave Bassett when he was a clogging non-league footballer at Wealdstone, at a time when Wimbledon's notoriety needed one more wildcard to reach its pinnacle, and then impressed Guy Ritchie at the conclusion of his football career 15 or so years later in order to cross a pair of rifles over his shoulders and begin a new direction.

For all his achievements in recent times, Vinny will always, to me, be an ex-footballer, not a current film star and general British no-hoper made good. He was known, and seems happy to be known now, as a chap who was the hard man of his generation on the pitch, who wears his numerous disciplinary foibles as a badge of honour and even accepts footballing ability as a second rate trait.

Well, I always thought the opposite. I thought he was a better footballer than he was ever given credit for. I also thought he wasn't close to being the hard man of his generation, more of a chief bully and hitman within a team that was generally disliked for its less than progressive methods of playing the game. He wasn't even the hardest at Wimbledon. And the likes of Stuart Pearce and Steve McMahon* would, in a proper fight situation, have eaten him whole for breakfast, burped and then demanded more coffee to wash him down.

But he cultivated this image that stuck, and he was happy to enhance the myth. He had shaved hair at a time when players were frequently bleached and mulleted, he made much of his dubious past and happily posed up ladders with a stack of bricks in honour of his previous profession as a hod carrier. All while headbutting Kevin Ratcliffe (who fell to the floor as if shot through the temple) and taking out the knee - and the career - of Gary Stevens while the Spurs player was shielding the ball harmlessly and going nowhere. And biting the odd Fleet Street nose.

There was one time when Vinny's whole family travelled to watch him play for Wimbledon at Luton Town but manager Joe Kinnear only named him as sub. Vinny had his boss by the lapels and had almost hung him on one of the changing room pegs before he relented and gave him his place in the starting line-up. The game got underway and within ten minutes he had gone into a bad tackle and been sent off.

Yet he could actually play. When he did tackle on time, he was capable of winning a very clean ball indeed. He could pass as effectively as any modern-day "holding" midfielder. He was good in the air, weighed in with goals and happened to possess a howitzer long throw too. It is a shame, in some ways, that his footballing skills were underrated or eschewed due to the other stuff he got up to.

In 1993, he was fined 50 grand by the FA for bringing the game into disrepute after putting his face and voice to a video about football's hardmen. I've never seen the video in question but I do know it included the likes of Tommy Smith and Ron "Chopper" Harris, players whom, in hard men terms, would have had the likes of Vinny as their dressing room fags.

He holds the record for the quickest booking in football, coming as it did after he chopped down Dane Whitehouse after fewer than ten seconds of a match between Chelsea and his old club Sheffield United. He loves this stat. He boasts about it. He should, however, love more the fact that he scored his first Wimbledon goal at Old Trafford in 1987, equalising against the (not so back then, but still more than Wimbledon or Wealdstone) mighty Manchester United.

But the rough means more to him than the nice. It adds extra fuel to his controversial flame. It makes kids who never remember him as a footballer ask more questions. It has done Vinny a great service to maintain his hard man image, however inaccurate that image is, as it kept him in the papers and earned him a good living from extra-curricular activities, eventually leading to his movie career. Sometimes, however, he should remind himself and the rest of us that he was actually an okay footballer at times too. The fans of each club he played for would agree.

* And yes, Vinny claims he won the FA Cup for Wimbledon in 1988 by taking out McMahon with an impossibly late tackle in the early stages. This is, of course, bollocks. Liverpool being rubbish and a certain historic penalty save contributed far more.
Authored by Matthew Rudd
Email ThisBlogThis!Share to TwitterShare to FacebookShare to Pinterest
2 exclamations of response

Don't Break My Heart by UB40, my favourite song of theirs.

I know loads of people who hate UB40, and loads more who think that all they did was the much overplayed Red Red Wine (or, if you prefer BA's alternative titling, Red Red Bastard Wine). Occasionally, someone at my club night will ask for UB40 but not specify a song, so on goes something other than Red Red Wine and they come back with the mega-ignorant retort: "This isn't UB40!"

I can take or leave them, but I certainly don't think they're awful. I think their sound in the earliest days is fantastic but after Labour Of Love and all those cover versions they got lost a bit in being regarded almost exclusively as a covers band. Don't Break My Heart is an important song in their career, as it's the one which achieved their highest chart position as composers. Unfortunately, I always assumed that they'd stuck to other people's stuff after Labour Of Love's success and therefore didn't know for ages they'd written this, and other big hits of the mid to late 80s, themselves.

This song has a lovely lilt to it, just ambling along with enough purpose to sense there is a middle and end to go with the faded beginning. Ali Campbell's jowly vocals are the same on this as they are on just about anything he has ever sung, but there is a bit of emotion in there that perhaps beforehand he was deemed too one-dimensional to show (though I thought he did a good job on Please Don't Make Me Cry, too).

It's a simple sentiment, a song asking for a burgeoning relationship to remain strong and seeking reassurance. It doesn't have a middle eight and doesn't ever get complicated, but the simple ones are sometimes the best. It's actually a very short song, as emphasised by the repetition of the title at the end and the rather long instrumental fade out that finally calls it to a halt.

The video is notable for Ali's skunk hairdo and the smart bit of self-awareness about his moody miming when the setting suddenly switches to the pub and he is 'caught' mouthing to the jukebox when it sticks on the word 'compliments'. A quick bash of the machine later and his mime continues. Craig David did something similar, didn't he?

A number 3 hit in 1985, with only Red Red Bast..., er, Red Red Wine and I Got You Babe being bigger UK hits for them at the time. UB40 must deserve some sort of merit (or at the least, a lifetime achievement award from the BRITs) for managing to keep the same line-up for 30 years before Ali made good his exit in 2008. That's quite a feat, irrespective of what you thought of their music.
Authored by Matthew Rudd
Email ThisBlogThis!Share to TwitterShare to FacebookShare to Pinterest
4 exclamations of response