"We understood each other, but didn't make a sound..."

Talking Loud And Clear by Orchestral Manoeuvres in the Dark. A song of obvious contradiction but one I still find most heartwarming and gentle on the rare occasions it turns up.

I didn't know much about OMD before 1984. I vaguely remembered Enola Gay and Souvenir, and also got given a flexisingle of theirs by my brother. It came free with a 1981 edition of Smash Hits which he had bought, against his usual heavy metal principles, because there was an interview with Rainbow therein. Oddly, on the flexisingle, the band were just called Orchestral Manoeuvres. I can't remember which songs were on it.

Then Locomotion was released as a single shortly after I really started to listen to absolutely everything in the charts, and I became interested.

Talking Loud and Clear was the follow-up to Locomotion, released in the summer of 1984 from the album Junk Culture. It was, essentially, an electro ballad and allowed Andy McCluskey to deliver his softest and most understated vocal yet, something evidently a paradox with the title and general theme of the song.

What I've always liked most is the length of the intro, which allows a new instrument or track to be introduced at the end of each bar. You get a few synth effects with a bass drum to start with, then a simple electronic melody track, a harmony of which is then added. Then the drums and bassline kick in, and it's that bassline that provides the eventual vocal melody for McCluskey. Finally, we get the "baaarm! baaarm! baaa-aaaarm!" brass section before the singer, after 56 seconds, finally begins to pretty much whisper a song about, erm, talking loud and clear. The only other song I can think of that has this type of gradual intro is Close To Me by the Cure.

McCluskey's lyrics give off images of alfresco summer afternoons in the company of a loved one, totally comfortable with the setting and therefore unafraid to say what he may think. I particularly love the line "doesn't really matter what we do or what we say; with every little movement, we give ourselves away".

After the first round of vocals is complete, there is a nice oboe score placed on to the song as a separator and then an instrumental bridge, before McCluskey returns with a second and final verse. It's quite a long song for such a short lyric sheet and there is no chorus, but it just works. As his voice finishes its work, the track carries on for more than a minute - oboe and trumpets mixing it - before fading away.

The video is a peculiar and evidently inexpensive bit of work. McCluskey and his OMD partner Paul Humphreys are initially seen as scarecrows in a farmer's field (and I recognise the actor playing the farmer but can't quite place him) before the pair of them turn up as themselves with glam 80s girlfriends, and enjoy a picnic.

McCluskey mouths the words while sitting down in his white trousers (serious grass stain potential) and then a little girl seems to nick an apple while the two couples go for a walk, leaving all their picnic apparatus and leftovers behind. Then they come back, pack up and go, and the girl returns to look at the scarecrows and do something with the straw on the front. As the song fades out, McCluskey and his glam girlfriend - with a different hair colour - return during a snowfall (and really bad fake snow at that) and drape a towel on the scarecrow's arm. The end.

If you can decipher what the hell that was about, then well done. I haven't the foggiest idea.

Video weirdnesses aside, I do think the song is fantastic to this day. Simple, effective and very much of its time as all the electronic bands from the beginning of the 1980s branched out in more grown up, thoughtful pop. OMD never quite hit the heights that some may assume - this song only got to No.11 in the charts - and perhaps there was a lack of obvious star quality onstage to go with some very polished songs. They also chose to write about rather quirky subjects, not least a certain infamous aeroplane, rather than go down the regular love song routine.

Of course, there was the most rare of comebacks in 1991 which produced big hits and the biggest-selling album, but largely revived nothing about OMD's heyday except McCluskey's exceptionally poor dancing, something which he acknowledges himself. The version of McCluskey we got during Pandora's Box was still nothing like the bloke of a million bodily itches who capered around stages during Electricity in 1980. But he was still very, very bad at it. Atomic Kitten should be grateful that all he did for them was write, rather than choreograph.
Authored by Matthew Rudd
Email ThisBlogThis!Share to TwitterShare to FacebookShare to Pinterest
3 exclamations of response 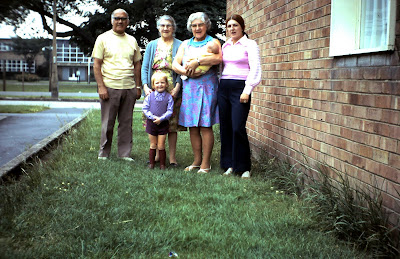 A happy family portrait? Not quite. This photograph tells a thousand family stories and it has made my mother take a step back, such was her amazement when it was uncovered.

My dad, in the 1960s and 1970s, took thousands of slides and only now is he starting to get them uploaded to his computer after buying one of those snazzy objects that transfer them to hard drive. When I was small, he would occasionally set up his projector and screen and show us all the family stuff from my earliest days and before, but the slides had, until recently, been in a cupboard for pushing 30 years without being touched.

This photograph was taken in the summer of 1973. I'm the baby and it's my maternal grandmother holding me. My mum is on the right, my maternal grandad on the left and my brother, aged three, is standing up in his purple tank top. However, it's the old lady standing above him which has prompted a few sharp intakes of breath.

This is my great-grandma, mother of my grandma on the photo. She would have been in her 80s when this was taken, and died in her mid-90s when I was a teenager. Yet I doubt that apart from this introduction to her new great-grandson, we were ever in the same room again, as she was a pariah in the family.

She was the daughter of an Italian immigrant who came to Hull in the 1880s. She married a Hull man and gave birth to my grandma in 1911 and my great uncle Jim a couple of years later.

Then she left them.

She just walked out, on her husband and two very small children, and hooked up with another man. There were no mitigating circumstances; she was just not cut out for family life, and just swanned off to live on her own terms.

Now this is something that would cause a few raised eyebrows today. So, imagine the sort of reaction it got in 1914.

My grandma and uncle were fortunate in that their father's elderly mother, and his numerous siblings, took them in, fed them and got them to school and so on while he carried on working. Single fatherhood was most rare, almost wholly unheard of, and had it not been for his extended family then the workhouse would have beckoned for those two youngsters.

A whole lifetime of recrimination followed. My great-grandma barely got in touch, even at Christmas or on birthdays, and despite living close to her children and their adopted home with their aunts. Often they'd walk by each other in the street without a word. She did attend my grandma's wedding but purely to witness, not to celebrate. She was informed of the birth of three grand-daughters, including my mum, in the 1940s but almost never took an interest. My grandma, despite her bitterness, made a point of informing her each time a great-grandson (four of them, including me) was born in the 1970s but it was met with little more than a casual, disinterested acknowledgement.

This photograph is quite an achievement in itself as apparently my mum and grandma made a point of turning up at her house, with husbands and boys in tow, and my dad took the snap. My mum says that an arrangement was made for the old lady to come to ours for her tea a few days later, but having agreed, she later wrote a letter to say that she wouldn't be coming and enclosed ten shillings for my brother and I.

To my knowledge, our family never saw her again. She simply wasn't interested in anyone who was related to her.

She died in 1987. My grandma, who was herself 75 at the time, felt compelled to attend her funeral but my mum couldn't go with her through illness and uncle Jim refused on principle. Eventually, he relented and went along, on the basis that she was there when his life began so he wanted to make sure he saw her life end. A sad but totally understandable view to take into the funeral of the woman who gave birth to you and then lost all interest.

Lately, my mum has been doing the family tree stuff and has even travelled to the village in Italy from where this old lady's father heralded. From her own basic memories of her grandmother, she has discovered ancestors in various parts of Europe, as well as finding out about a host of multiply-removed cousins she never knew she had. Ironic then that my mum's ceaseless quest for knowledge of her family background should begin with the history of a woman to whom family was anathema.
Authored by Matthew Rudd
Email ThisBlogThis!Share to TwitterShare to FacebookShare to Pinterest
2 exclamations of response