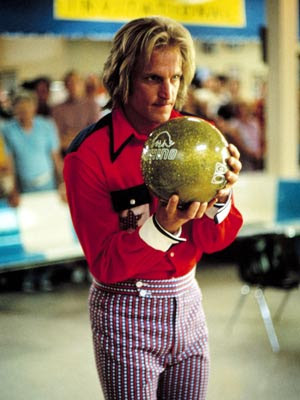 I've been ten pin bowling with the two nephews today. There were seven of us playing altogether - and my younger nephew, aged five, won with 94 points. And although he was using one of those support frames to unleash his bowling ball, and had the barriers up at the side, he won fair and square.

Ten pin bowling was a big fad when I was growing up. There was always a bowling alley complex in the Sutton Fields area of Hull and then bigger ones sprouted up on freshly-formed industrial parks. They were good for a cheap date as teenagers, or a day out with pals during school holidays. Nowadays it seems to be very much reserved for families rather than groups of bigger kids or adults.

When I was a boy broadcaster at BBC Radio Humberside in the early 1990s, reading out non-league football results and perfecting my kettle boiling skills, I took part in a 24-hour bowling marathon that the station had organised as its contribution to Comic Relief (or it might have been Children In Need - I can't recall). Aside from the staff, the local ice hockey team, back then called the Humberside Seahawks and full of alpha males with biceps like anvils and Canadian accents, took part. The majority of the 24 hours was spent listening to their stories and watching them drink an impossible number of bottled beers while simultaneously hurling balls down alleyways, desperate to win.

Like anything else, there comes a point when you bore of something you otherwise really enjoy, just as a kid who gets a brilliant new toy on Christmas Day will not look at it again by the end of February. Ten pin bowling gets very tedious after six hours, never mind 24. Fortunately, there were pool tables and other attractions to maintain interest until your forearm and your interest were revived enough to have another bash on the lanes.

The best I managed was four strikes in a row, which I'd never seen before, therefore making me a little disappointed that such a feat was simple called a "four" on the screen despite the far more interesting label given to three straight maximums, a "turkey". This was not replicated today even partially, as I didn't get a single strike whereas my five year old nephew managed two spares and a strike with his last three goes - I swear on one of them he wasn't even looking in the correct direction as he let go of the ball - and won the whole game.

Ten pin bowling isn't on the telly very often, but when it is I'm always fascinated by how skilful the competitors are, especially when it comes to getting that big swerve on the ball midway down the line just as it looks as though its heading for the gulley and a fat zero. I can certainly manage the bit where it heads for the gulley, it's just the swerving back on to the pins that I've yet to master.

So, seven players, and young Jack won, though his celebration only lasted a few seconds before he was away pressing indiscriminate buttons on a gaming machine. My competitiveness does me no credit when it's against small children to whom I'm related, but I still can't believe I lost to him. He'll be reminding me of it for years on end. And quite right too.
Authored by Matthew Rudd
Email ThisBlogThis!Share to TwitterShare to FacebookShare to Pinterest
2 exclamations of response

No room for oranges any more

When any alleged creative flair has buggered off down the pub, the saving grace comes always via one's cats. Or, on this occasion, a cat in particular.

It's Sidney, our youngest, who fell in love with a model Basset hound when we first got him and has now decided that the large settee in the conservatory is less preferable to ... a fruit bowl. 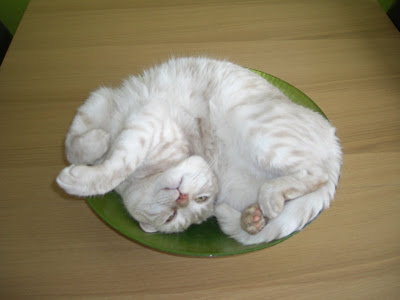 This was the contorted state of him on Sunday afternoon. Such was his shape and lethargy that I walked round the dining table and took photographs of him in said fruit bowl at all four angles. 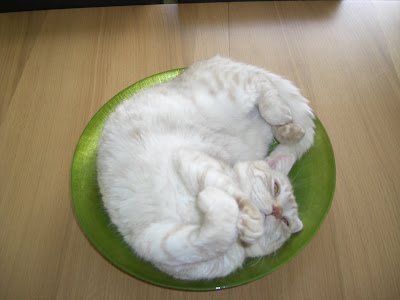 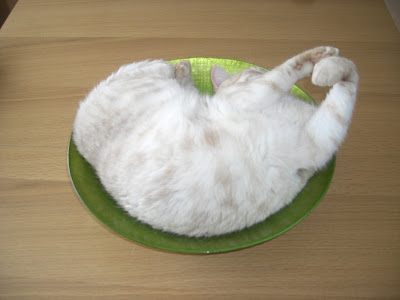 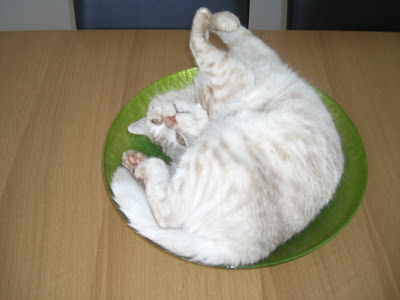 And the bowl means a lot to him. A few weeks back, it had fruit in it. Sidney still chose to relax next to it until the day came when the produce had gone and he got his bowl back. 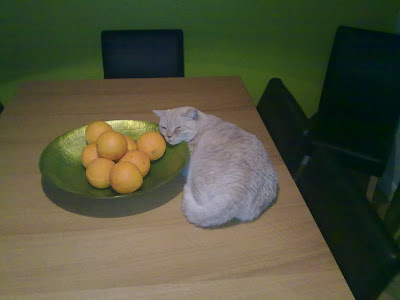 This unusual location for rest, plus his belief that the sponge/scourer combo thing in our kitchen sink is actually a tiny kitten, makes me suspect he's not all there. Bonkers, but cute.
Authored by Matthew Rudd
Email ThisBlogThis!Share to TwitterShare to FacebookShare to Pinterest
4 exclamations of response