"You'll play it because nobody says no to me..." 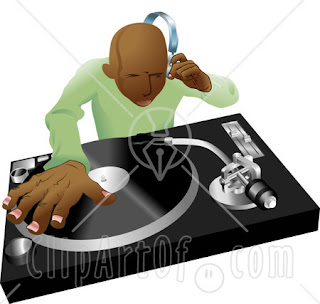 Last night was a stinker, really. I did the nightclub gig until 3am and my brand of 90s and 00s rock and dance, which has gone down a storm so far, was met with apathy from the half-bothered crowd,.

It also was met with real adversity from the sort of brattish, teenaged know-nowt that is every jobbing DJ's worst nightmare. And they are always female.

Lads in audiences tend to be far more understanding. They ask for a record. If it is an inappropriate suggestion, you explain that you can't play it, for whatever reason it may be (you don't have it, you've already played it, it's a 90s and 00s night and therefore They're Coming To Take Me Away Ha Ha doesn't quite fit the musical brief - okay, I made that last one up) and they will for the most part, accept your explanation and come up with another suggestion that works or just enjoy what you do play.

A female in this situation is not quite so understanding. "But what you're playing is shit!" "But my song will get everyone dancing!" "But I wasn't here when you played it!" are among the regulars. Beyond that, last night this particular horror show of a female couldn't wait, for whatever reason it was, for me to come over and see her. I had the headphones on, cueing up and testing a mix - ie, I was busy - and she just decided to physically jab me in the side until I paid her the attention that madam felt she merited.

I can cope with a debate over musical differences, but being jabbed in the side - or worse - is beyond the pale. If I were a female jock and it was a bloke who was administering the pokes with their sharply nailed finger, then I'd be within my right to have the invader chucked out. Anyway, I did what I usually do in this situation, and took a hell of a lot longer than normal to talk to this dreadful person by keeping the cans on and pretending to work.

Eventually, however, I went over to her. She asked for something unplayable, both for the night and for the general effect it would have on the dancefloor. I could have just replied truthfully, but instead I said I'd look for it, the classic fence-sitting answer, then when she came back two hours later to ask why I hadn't played it, I could say I had not been able to find it. Sadly for me, she returned with a jabby finger every other song to ask why I hadn't played it for her right here, right now, immediately, pronto etc. She started to swear, issue threats, question my motives, the usual stuff. In the end I just turned my back on her and stood in a section of the cordoned area which was not within fingernail distance.

Why are some people like this? My job is one of the few where it seems acceptable to be told you're crap at it by someone with no brain at all from the moment they strut into the premises where you work. I can't imagine that this vile girl, whose legs and curves meant she knew she could hold sway over weak-willed blokes, would be so uncouth to any other person just doing their job.

Eventually, she went out for a fag and got distracted, and she didn't come back and whine at me for the last two hours or so. Someone else did though, who claimed she could do a better job than me because her boyfriend was a DJ. I pointed out that her boyfriend was a DJ but she wasn't, but that held no sway. That'd be the equivalent of Christine Bleakley being able to take penalties and score 25 deflected goals from distance a season because Frank Lampard can (with apologies to BA).

What irritated me about this second one was that she had danced constantly all evening, irrespective of what I played, singing along to all the words - and then had the temerity to tell me I was playing rubbish. So rubbish was it that she had spent two and a half hours throwing shapes with a drink in her hand prior to informing me of her ill-mannered opinions. She looked horrified when I showed her that there was a door for her to use if she was not satisfied. She then went back to her corner and - yes - started dancing again.

I despair of people, I really do. The problem is that it's easy for them to take it out on me if the place isn't full. They want a better atmosphere which is possible only when more people are in. It was half-full last night at best, so that evidently is my fault. The fact that most ordinary people of the world don't party on a Sunday night because they have jobs to go to the next day and kids to put to bed is lost on these responsibility-shirking idiots. And yet a fortnight before, we were almost full and everyone was having a good time, with no arguments and no complaints. They drank, they danced, they flirted with each other, they went out for a smoke, they let me do my job. In between, we had Easter Sunday which was jammed full of my brilliant Saturday regulars and it was the hardest and yet most rewarding night I've done since New Year.

I'll put last night down to a one-off. I'm hoping we don't see these dreadful girls again but I know that if they go, there will be two more similar know-it-alls of questionable morals and absent decorum who will take it upon themselves to abuse me if a three-minute period of their five hour stay with us doesn't come up to scratch. Such is the job.

One week, years ago, I lied through my teeth when a really obnoxious bit of 20 year old work claimed I was rubbish. I replied, for effect only, that she should see the vastly sized bank balance that being a rubbish DJ earns you. She spent the rest of the evening desperately trying to be nice to me and I dutifully spent the same period completely ignoring her.
Authored by Matthew Rudd
Email ThisBlogThis!Share to TwitterShare to FacebookShare to Pinterest
2 exclamations of response