Shite.
Authored by Matthew Rudd
Email ThisBlogThis!Share to TwitterShare to FacebookShare to Pinterest
1 exclamations of response

After the Leaders Debate ended last night, I did some channel hopping and found that ITV3 were about to show An Audience With Freddie Starr.

Now, I watched this when it was first shown, though didn't realise until inspection of the end credits this time round that it was a whole 14 years ago. I should have guessed, really, given the youthfulness of Patsy Palmer and how unbotoxed Dale Winton was when Starr dragged him on to the stage.

Anyway, the point is, this was a stunning hour of television. Chaotic but controlled and screamingly funny. Starr chucking live maggots into the crowd and the camera panning in on Faith Brown picking them out of a grossly overplumped cleavage. Peter Stringfellow having his hair forcibly cut from within a set of stocks - and Carol Smillie's half-horrified, half-orgasmic face in the crowd as the scissors snipped away. Nigel Havers, without his grey highlights, trying desperately to sing along as an unrehearsed backing singer and failing. Mr Motivator being asked to pedal an exercise bike to "keep the power going" while Starr did that 'speed up, slow down' shtick on Unchained Melody.

And between the hoots and howls, some terrific singing, especially when Elvis Presley's backing vocalists, the Jordanaires (and their amazing wigs), came on stage to back Starr with style and a smile.

I know Starr is controversial as both a person and performer - though he doesn't to my knowledge have racially dubious material that got some of his peers taken off the television forever - but why is he not on television more often? Is he retired? Is he regarded as too old-fashioned? I'd rather watch him for an hour than Ricky Gervais (though I'd rather watch Kenneth Starr for an hour than Ricky Gervais).

Here's the 'speed up, slow down' song for you. It's tremendous.

And everything is purple 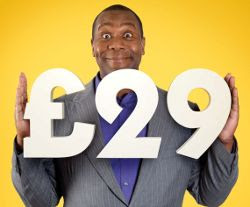 Premier Inn hotels are starting to piss me off with this £29-a-night offer of theirs. Have you seen the smallprint on it? It only applies to certain hotels, on certain dates, for a certain number of days, booked online only, etc etc etc. And the fact that it's Lenny Henry advertising this almost-con makes it worse.

The truth is that a night in a Premier Inn costs £70 if you are a lone adult, pretty much wherever you go. Now for a budget hotel, albeit better than Travelodge, that is still too much. And when you go to their website looking for a £29 room but only get offered a £70 one, you just feel totally fooled. Nobody attracted to a £29 offer is then going to book for £70. Nobody.

I used to look at the Premier Inn website for hotels for when organising accommodation for our Nerd Nights. But not any more. They are simply too expensive while claiming to be dirt cheap. The expression "budget hotel" appears to have changed its meaning from "limited budget" to "unlimited budget" if we use Premier Inn (or Holiday Inn Express, judging by the price I was quoted when trying to find somewhere to stay for our June jaunt to Liverpool) as an example.

For the last three Nerd Nights we've found terrific rooms at less than 40 quid each in smart hotels that aren't chained, via lastminute.com. It's the way to carry on. I shan't be staying at a Premier Inn again unless they begin to tell the truth about their prices for 99% of the people who want to stay there. And change their celebrity endorsement.
Authored by Matthew Rudd
Email ThisBlogThis!Share to TwitterShare to FacebookShare to Pinterest
0 exclamations of response