There are three televisions at the gym, and the remote controls are locked away in the manager's office. The manual controls on the side of two of the televisions are broken, meaning we can only change channels on one of them.

And nobody dare do so, as there is always at least one teenager paying more attention to some misogynistic get on 4Music (and their reflection) than the rowing machine.

This means old farts with distending stomachs such as I have to, in the main, have to suffer half-hourly repeats of these videos. To be fair, some of the tunes are very good - I think If We Ever Meet Again by that vocoded bloke and the bird who kisses other birds (and likes it) is excellent - but in the main they bore me.

And the bloke I have particular disregard for is Jason Derulo.

Now maybe it wasn't just down to monstrous ego in the recording studio. Maybe he was worried that the radio wouldn't play his record and so he announced his own name for fear that DJs like myself would never be able to. So on the first go, it is tolerable.

But on the follow-up single (after a big hit with the first, shooting him to fame and stardom) he does it again. And now I can't bear him.

I'm sure he's a nice guy, and maybe he suffers with his confidence. But there comes a point where a producer, or his manager, has to take him to one side and say: "Look Jase, we know you're hungry for success, but you starting to look like a berk." Or words to that effect. It's the musical equivalent of breaking the fourth wall.

What on earth is his album like? Ten songs all self-introduced, in the third person. As we all know, anyone who refers to themselves in the third person deserves an instant slap. And any kind of roughly high profile person is prone to it - I heard Katherine Merry, the former 400m runner, do it on an episode of Fighting Talk a fortnight or so ago and the host Colin Murray instantly docked points off her total.

My guess is that Derulo aspires to be as successful as Craig David, the original pretentious third-person speaker, though while not much less irritating, he does at least have the caveat of announcing his name in a slightly more subtle manner, and even that song he did with the Artful Dodger was only a guest performance and therefore he may not have had a choice.

It's not entirely a new thing in music, of course. Beyond the RnB and hip-hop pillocks ("Beyonce, Beyonce! Shakira, Shakira!") who make a habit of bigging up themselves in the third person, Queen's demonstrably unmemorable hit from 1990 The Invisible Man has Freddie Mercury introducing himself, and then the others, prior to separate clauses in the song. It doesn't improve it but it truthfully doesn't really diminish it either as, like everything off The Miracle, it was dire.

It's easier to get away with if it's a duet, as they can just say they're singing to each other and their names can be mentioned without them having to do it themselves. And those who think Nelly and Kelly Rowland were groundbreakers in this field never heard Shaky and Bonnie in 1984.

Perhaps the most optimistic "put my name all over the song and I'll be a star" example, however, is right here. But rather this bloke than Jason bloody Derulo. 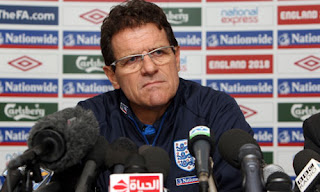 F-C finds football talk "tedious in the extreme" (it's a quote of his from years ago that I've never forgotten) but I have to mention the beautiful game today. So much is going on.

My team were relegated and deservedly so. BA's team didn't progress in the play-offs. But VS and his olden golden heroes had a marvellous season which was complemented by a manager of wit and sartorial elegance so obvious that even Stuart Hall felt compelled to comment upon it.

Beyond all that, and beyond Fulham's heroic stumble at the final Europa League hurdle last night, there is the small matter of the World Cup to consider.

I know loads of people who give no tosses whatsoever about football but somehow every four years manage to hang an England flag from their front window and try to begin arguments about whether Rio Ferdinand is still the same player he was in 2002.

They claim to like football. They don't. They are the same people who show no interest in politics whatsoever and then turn up to vote at 9.55pm every five years because they feel left out.

Although the game is more important to me than work, music, this blog, I have as much admiration for out-and-out football loathers as I do for my fellow devotees whose weekend is dictated by a match and whose mood is subsequently dictated by the result of that match.

I have less admiration, however, for people who think they know better than the people who actually work in the game. I therefore hate myself, as someone who writes match reports and other bits for various websites disagreeing with tactical and selection decisions made by managers. But while I do this, I find there are limits, and this quotation from the front of the BBC's World Cup pages has made me laugh today:-

"After Fabio had picked his 30 squad I thought I'd pick a 23 man squad, who in my opinion, are a better all round squad with a stronger first 11."
I don't need to read his actual squad of 23 to know that this guy is someone to pity. He brazenly believes he knows better than a highly-paid, highly-successful, highly-qualified coach as to the form and talents of England's best footballers. Naturally, he appears under a pseudonym.

I've had debates and disagreements about certain footballers, as have BA and VS, but all of us know where our alleged knowledge stops is nowhere close to where the professional football person's begins.

My summer will consist of shouting "get Crouch on!" rather a lot while drinking ale and bemoaning the day the FA succumbed to scandalous Government interference and sacked Glenn Hoddle. But even if we win the World Cup and Peter Crouch spends all his pitch-time on his arse, it doesn't mean I know any less. It merely means I knew bugger all to begin with.
Authored by Matthew Rudd
Email ThisBlogThis!Share to TwitterShare to FacebookShare to Pinterest
4 exclamations of response