Teenage girls of all generations have had pop heart throbs and happily talked about them. My mum's lot loved Elvis, 60s girls went for David Essex and the like, the girls in my class at school panted for Duran Duran and then Take That and their successors came along.

But lads? Well, I'm guessing it's always been harder to admit which pop stars you fancy, because the intention is slightly less delicate than that of a girl dreaming of her handsome Nick Rhodes or Jason Orange sweeping her off her feet.

In the gym today, a bunch of sixth form boys were having an iron pumping competition, while watching one of the digital music channels playing some kind of Top 10 pop girls thing from the last decade.

There were some good radio songs in there (that's good radio songs, not good songs per se) that I hadn't heard or played for a while. I found myself knowing all the words to Sweet Dreams My L.A. Ex by Rachel Stevens as I worked the chest presser.

I played this such a lot on the radio when it was in the charts.

Anyway, these lads were giving their own opinions on the "fitness" (appropriate term, given our setting) of these popstrels. As well as Stevens, there was Christina Milian, previous incarnations of the Sugababes, Britney Spears, P!nk and one or two others.

They kept their comments quite respectful as far as the other gym patrons were concerned, though there was no ambiguity about what they were actually thinking. Must be all the testosterone flying around, aided by lifting dumb bells that succeed in displacing your scapula while you pretend not to notice. Nothing makes an adolescent boy more boyish than lifting weights while staring at decorative pop stars.

And their final conclusion?

"None of them are as fit as Cheryl Cole or Alesha Dixon."

Blimey. Sixth form boys really do find those two attractive? Cheryl Cole has the build of a wastepipe and Alesha Dixon the personality of the same.

As this crumbling, delapidated 37 year old tried to locate his own youthful red-bloodedness of yore, I recalled who, on purely lustful terms, my favourite female pop star of the 1980s was. I liked the music, of course, but on this occasion it was a distinct second best...

I feel sorry for today's teenagers; they don't have a Hoffs after whom they can hanker.
Authored by Matthew Rudd
Email ThisBlogThis!Share to TwitterShare to FacebookShare to Pinterest
1 exclamations of response

The language of football

One of the many criticisms aimed the way of England football coach Fabio Capello of late has been his apparent inability to progress in his grasp of the English language.

Many a cynic has claimed that Capello is selectively good at English; that is, if he is asked a question that he considers unfair or difficult, he claims ignorance and looks to his interpreter to find an answer, or just declines entirely to respond.

Capello didn't have a word of English when he accepted the job in 2007. Since his appointment, three more Italian managers have come into the English game at the highest club level, and all are far more adept at the native tongue than the man in overall control of the nation's footballing aspirations.

It's a bit unfair on Capello to compare his standards to that of Roberto di Matteo, the heavily-scarfed, buzzcutted Italian now in charge of West Bromwich Albion, as he has had an association with the English game since arriving at Chelsea in the mid-1990s as a player. He now has a warming hybrid accent of Anglo-Italian and is, as is the case with many other non-English managers, one of the more articulate when communicating with the media.

But since Capello, both Carlo Ancelotti and Roberto Mancini have come into the English game, as Italian head coaches at Chelsea and Manchester City respectively. Ancelotti had no English at all but used the summer break immediately after his appointment to go to intensive lessons, in the Netherlands if I recall rightly, in order to learn the basics of the language and the most pertinent clichés in the game. 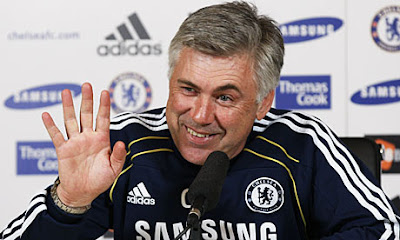 I watched him being interviewed today, artfully issuing denials about his rumoured offer to resign over alleged hierarchy problems and two straight defeats for his team. He has got to the stage now where he knows what he is saying, and can understand the questions being asked, but has yet to adapt to structure and mannerisms that will fully anglicise his speech. He is, however, miles better than Capello.

Mancini had a little English when he took over at Manchester City about a year ago, having briefly played for Leicester City towards the end of his career. The telegraphing of his appointment, at the expense of dead man walking Mark Hughes, over a good few weeks prior to the final confirmation, meant he could bury his head in his Italian-English English-Italian textbooks and get himself up to speed. He is now understandable and quite fluid in his speech, though he can go even longer than Capello with his "errrrrrrrrrr" fillers while translating ahead what he wishes to say.

Two of Ancelottis predecessors at Chelsea were Italian, with Gianluca Vialli already fluent (thanks to a classical education back home) upon arrival to the extent that was uttering expressions like "over the moon" and calling the players "the chaps" the first time a British mic was shoved under his nose. The ace Claudio Ranieri needed a translator upon arrival, including one memorable rant-like spiel in his nativ tongue which went on for 30 seconds and was, with exquisiter deadpannery, translated by his intepreter as "a game of two halves", leading to suspicions that the interpreter, who doubled up as a Chelsea executive staff member, had no Italian at all and was just taking the mick. Ranieri eventually learned the language and became the most charming man in football.

For all the concerns about foreigners in the game, be they on the pitch or in the dugout, there is rarely an opportunity to be disappointed by the way they take on the language and adapt to it. Thierry Henry speaks impeccable English, both grammatically and in terms of his charisma and sincerity. George Boateng, a Dutchman, had an accent akin to that of an upper class member of the English gentry. The current manager of Wigan Athletic, Roberto Martinez, is Spanish but has spent vast swathes of his adult life in English football and therefore hardly a hint of Spaniard is present when hs speaks to the media. Despite a tendency to use the verb "to do" misguidedly ("I think we can do a good game") and his insistence that "chances" were in fact "occasions" ("we created a few good occasions to score") there was very little wrong with Sven Goran Eriksson's grasp of the language during his tenure as England coach, if not his grasp of using substitutes wisely.

That's not to say some foreign footballers don't struggle, but it's usually with their delivery rather than their knowledge. Osvaldo Ardiles already knew English when he arrived from Argentina in 1978 and has spent most of his subsequent life and career in the UK, but I still can barely understand a word he says. Much criticism was made of the Togolese striker Emmanuel Adebayor when employed by the BBC as a World Cup pundit in the summer - not because of his accent or knowledge, but simply because he spoke far too quickly. British viewers can forgive that if it is a Brit doing it, but a chap from Africa is on a hiding to nothing. Pity, as he came across as a nice fellow.

The main source of amusement to be had is when a player from foreign climes adapts not just the native tongue, but the regional tongue too. Jan Molby arrived at Liverpool in 1984, aged 21, and immediately spoke his already-fluent English with a Scouse accent. He still has it to this day. There is a player currently unattached to a club called Jérémie Aliadière, who arrived at Arsenal from France as a 16 year old and now uses a stunning hybrid of French accent and London dialect stylings when talking.

None of this helps Capello, whose struggles with English are now providing a handy stick with which he can be beaten by those who are conscious that blaming a manager for the lack of quality players available to him is both unfair and meaningless. His likely successor for the job is Harry Redknapp, the manager of Tottenham Hotspur who, despite being English, has still not learned the value of an adverb. "We did great, he played fantastic" - you won't catch a well-educated Italian saying that...
Authored by Matthew Rudd
Email ThisBlogThis!Share to TwitterShare to FacebookShare to Pinterest
0 exclamations of response

Well, the Pet Shop Boys interview was broadcast last night. Here are the 20 pieces of music they selected, which we played during our conversation.

Tiesto "Who Wants To Be Alone"
Grum "Want U"

Ke$ha "Take It Off"
Sub Focus "Could This Be Real"

Thanks for the nice comments.
Authored by Matthew Rudd
Email ThisBlogThis!Share to TwitterShare to FacebookShare to Pinterest
1 exclamations of response