It was the TV Cream festive shebang at the Phoenix Arts Bar in fancy London town last night. I'm writing this with coffee and mild headache in the lobby of the Etap hotel next to London City Airport, a rather small example of its ilk, to the extent that the planes that land there have a boy's voice and the word 'JIMBO' emblazoned on the side.

It was all a bit rushed, having got home from Plymouth late on Wednesday night, only to be up early and off to the railway station to head capitalwards the next morning. Dearest Alex met me off the train and we had a celebratoty Costa coffee while being hassled by bootleg cake salesmen and discussing his forthcoming nuptials.

Then it was to Oxford Street, as I used the opportunity of a London trip to prep this weekend's Q The 80s at Mappin House, home of Q Radio. Then it was a couple of swift vodkas with my TV Cream colleague Ian before we leapt on the DLR to go to the hotel.

I've never been on the DLR before. All I assumed was that it was an overground version of, well, the underground. This is the case, though it is also driverless. This made me wonder what happens in the event of an emergency that takes place between stations and how quickly a member of staff could get to the train to manually sort it. A medical emergency is probably harder to sort; a first aid kit and one diligent passenger shouting "is there a doctor on the train?" is probably the principal way of trying to get help.

Our drinking on Oxford Street had left us not much time; we got to the hotel, checked in, ordered a cab and were out again and back to the DLR in 20 minutes. Upon arrival at the Phoenix, I squeezed into a seat with the others and was immediately confronted by a dual problem.

There was a spotlight shining on a glitterball and the harsh reflective light was right into my eyes. Meanwhile, the choice of music was unsurprisingly Christmassy, but mixed in with John Lennon and Wham! were full choir versions of carols, which were very loud and very slow and brought the mood down. Being the self-important types, we got both the lights and the music turned off. The lights stayed off. The music didn't.

Much approving conversation about the Coronation Street tram crash and live episode, including titbits about one of our brood fulfilling a life's ambition by interviewing Betty Driver during the 50th birthday publicity, when she was, in a rare public appearance, wheeled (literally) in front of a gaggle of television hacks invited to Granada. Meanwhile, this collection of minds remembered crucial information about the character played by prolific second-string sitcom sleazer Milton Johns after he bought the corner shop (Brendan Scott), the unnoticed microphone problems when the Rovers burnt down in 1986, the time Eddie Yeats got so pissed he painted yellow lines along the street to stop traffic from parking there, and Stan Ogden's infamous toe injury which resulted in a picture of the heavily bruised waggler featuring on the front of the Weatherfield Recorder.

Louis was there, of course, doing his life and soul shtick with his usual bombast and beauty. A discussion about Band Aid led to him having a "eureka!" moment and digging out his laptop to show us this...

It's from Norway, and I think it's all the guests who have appeared on a particular chat show over there. The funny thing about it is, aside from every ex-celeb on show being slightly more incongruous than their predecessor, that there was obviously a licensing problem with the Beatles and so the version of Let It Be they're lip-synching is the one done by Ferry Aid in 1987. Immediately, as we sat down to watch, everyone asked: "Who's going to be Kate Bush?"

Louis, on a weekend of debauchery in London of which we were a mere part, also brought with him, as a gift to anyone who snaffled it, an ITV-branded pedometer which he was sent in the post. I have it. And I don't know why. But for your pleasure and sheer delight, here it is... 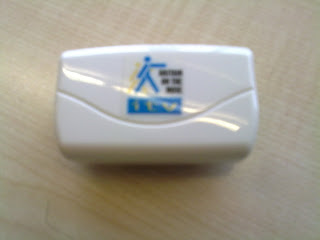 We then were greeted by a well-known face in the shape of actress Fliss Walton, who some of us know via other networking means. She is an actress with an extensive CV but for the moment she is known as That Woman Who Sings Isa Isa Baby In the Halifax Ad. She's all very cool about it, and didn't slap anyone who asked her in a "comedy" manner if she would like some solidified water in her gin and tonic.

Ian and I left, in the company of Louis, Justin, Phil and Suzy, and headed for more vodka in the comfort of a smart flat in Bethnal Green that has a lift with over-sensitive buttons. A cab ride followed for the hotel's glorified prison cell. Ian, who was drinking Bombardier, feels like death warmed up. I don't.

A top night with top people. Please visit the TV Cream site, not least because it's had a gorgeous refurb recently. It's one of the internet's great British brands, 13 years standing, and it's the reason these splendid meeeeeeeeja doofuses know one another.
Authored by Matthew Rudd
Email ThisBlogThis!Share to TwitterShare to FacebookShare to Pinterest
0 exclamations of response 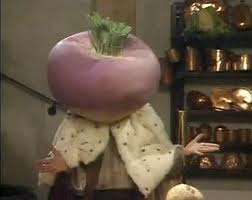 I'm in Plymouth, visiting my brother and nephews as I won't see them over Christmas. Heading home tonight but first a visit to the theatre to see a production of The Enormous Turnip.

It's a book I read as a child, though I had to Google it to be reminded of the plot.

I should make it clear that my nephews are eight and six, and yes, they are attending the production.

Yesterday it was a case of history repeating itself as I was beaten, fairly and squarely, at ten pin bowling by one of the nephews. Every benefit in making them feel like winners at an early age, isn't there?
Authored by Matthew Rudd
Email ThisBlogThis!Share to TwitterShare to FacebookShare to Pinterest
0 exclamations of response