"He's so lazy, he puts food down the toilet to feed the birds at the seaside..."

While everyone bangs on about how unspeakable Frankie Boyle is (and he is), last night we got some proper comedy gold.

The tributes to the Two Ronnies, in the form of an old Christmas special (including Elaine Paige, natch), a Ronnie Corbett tribute documentary, some remarkable studio footage of the two in action - out-takes, re-takes, gurnings and all - and then a repeat of the Ronnie Barker BAFTA tribute, were compulsive viewing.

Barker, as I said here, never excelled himself more than when he played Norman Stanley Fletcher, I felt, as it was the only untypically Barker thing he did that gained a high profile. Corbett, now, is getting the attention as a milestone birthday approaches. Although a multi-skilled performer, consummate joke-teller and seemingly very broad-minded and generous chap, he was in the shadows, and not just literally, for all the years and he and Barker were together.

Sorry! was a brilliant show but didn't deliver in the way that Barker's two major sitcom projects did (although I still think Open All Hours was salvaged just by Barker's stutter and Lynda Baron's bosom). It is rarely repeated on satellite channels and never terrestrially. And on last night's Corbett tribute, it disappointed me that in the context of his career, it was deemed to be worth only five minutes or so of mention, prior to much smoke-blowing regarding his interesting but (especially in the latter) largely unfunny appearances on Extras and Little Britain.

I used to get snorts of derision for this, but I always felt that when Corbett sat in his chair, telling a 20 second joke that ended up taking five minutes due to digression, it was often the highlight of a whole Two Ronnies episode, and they were all good ones as well. Given that Barker frequently had wordplay sketches to himself, it was both fair and sensible that Corbett was offered his weekly opportunity to show his particular individual skills too. He was a comic, Barker an actor. They taught each other what they knew. And, as somebody said on the documentary, in the end the actual joke being told was not really the point of having Corbett in that chair, with his yellow-logoed sweater. On the warts-and-all Two Ronnies studio show afterwards, I loved the footage taken from behind the chair, especially as some of it was Corbett hamming it up while the cameras got into position. 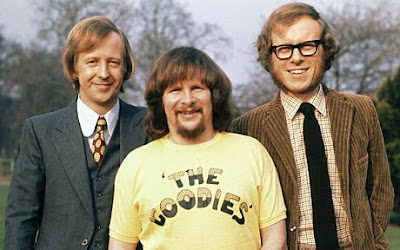 After all this Two Ronnies action we got another episode of the Goodies. I know more about the Goodies' legend than I do of the actual programmes. Never really been a fan of Bill Oddie in modern times but I like Tim Brooke-Taylor and utterly adore Graeme Garden, so I watched. It was the end of the world at Christmas 1977 and I laughed like a drain. Now, at last, I know what the fuss over 25 years of allegedly being airbrushed out of BBC comedy history was about.

Clean, daft, moving, clever, topical (for its time - if Bill Oddie wants to spend his last half hour conquering the Three Degrees then that's fine by me) and just great fun. They're on late night on BBC2 all week until the New Year. My education has begun right here.

As for me, I have a club night to do tonight and then a busy holiday season follows. Thanks for reading all year and if it's ok with you, I'll keep writing it. Have a fantastic Christmas.
Authored by Matthew Rudd
Email ThisBlogThis!Share to TwitterShare to FacebookShare to Pinterest
2 exclamations of response

Something cute and innocent associated with Zimbabwe

Sometimes, a litter of 17 healthy Rhodesian Ridegback puppies is all you need.

I watched that Graham Norton talk programme last night. It's been on in the background before, but as I was cooped up in bed with a horrendous cold I had little choice but to take actual notice this time.

And I'm glad I did. I really enjoyed it.

Cher and Dawn French were the guests, and it was notable how the conversation seemed totally unplanned or unstructured; Norton went from one to the other, finding links from their lives to address to the other lady on the sofa and making them feel entirely relaxed.

I switched off when he introduced The Script - even I have limits - but it was tremendous.

I've always been a bit 'meh' about Norton. It's well documented that he got a regular television gig sort of by accident; he was the camp unknown who was roped in by the unwatched (and, in Huddersfield at the time, unwatchable) Channel 5 in its mid-90s infancy to cover for Jack Docherty on his semi-awful late night talk show. And he ended up being miles better at it, to the extent of winning an award when it wasn't even his job.

Talk shows are pretty much what he has done ever since, albeit some complicated and extreme innovations of the genre. I didn't care as much for the type when seeing an mpeg of a man's head disappearing up a donkey's arse was as vital to the show as asking Joan Collins about her bra collection, but this new incarnation on the BBC seems to have him in exactly the right place.

He can ask serious or frivolous questions without the guest feeling put out by either, and it has to be said that as a gay man, he can ask saucy questions of female guests that a straight man could not. He got so much information from the newly-single Dawn French about her dating habits last night while also, without any great effort, getting Cher to reveal the colour of her knickers. It's hardly thought-provoking stuff but it was all in context for a revealing, entertaining and not too deep but also not too dumb knockabout bit of telly. And at times it was screamingly funny.

There was much gnashing of teeth from the anti-BBC rags about Norton's contribution to the corporation after signing on a megaquids deal and then seemingly doing very little for some time. But if this is the culmination of that search for the correct vehicle, much kudos to those who were involved. Far better this than Jonathan Ross's embarrassing sycophancy and ill-research, or the method of "come on, get the plug in and piss off" brand that Michael Parkinson, the nasty old get, troubled himself with in his dying years while having the nerve to criticise others.
Authored by Matthew Rudd
Email ThisBlogThis!Share to TwitterShare to FacebookShare to Pinterest
0 exclamations of response