"Methinks it's time to hack the Prince to death..."

They're repeating every episode of Blackadder on GOLD at the moment. This is hardly something to be surprised about, of course. GOLD shows the same dozen or so sitcoms all year round, just packaged up into a different brand or motif to make their less intelligent viewer feel duped into thinking it's something new. At the moment it's the Magnificent 7 - ie, seven sitcoms you've seen a million times before, on for your pleasure again.

Blackadder is familiar now but of course, at the time of its original showing it was one down from The Young Ones as far as viewing something while feeling your parents won't get the joke and may switch it off was concerned. The scripts and jokes were more conventional but it still had lavatorial humour and bits of swearing, and any mother who thought Terry And June was bordering on drug-crazed comedy because they never quite learned how to stay upright in those garden chairs was rarely going to approve of a codpieced Rowan Atkinson making gags about snot.

Everything you have observed about Blackadder down the years, we have all observed. The thing I've liked about it with a spot of hindsight, having heard those zig-zagged similes a shoulder-disjointing number of times, is the prevalence of "traditional" actors who were recruited to take part.

The original Blackadder had Brian Blessed and Elspet Gray. I suspect I'm in a majority when I say I still aren't keen on it now. To be honest, with the three follow-ups as comparative materials I think that first stab at Blackadder is horrendous. But it had actors. Ac-tors. And this was a policy continued into the subsequent efforts, even when the budgets had been slashed, the sets shrunk and the knob gags upped.

Can you imagine being an ageing Kenneth Connor on the day in the mid-1980s when his agent rang him up and said, almost with a sense of resignation, that he had been asked to play the part of an ego-driven Shakespearean actor, sharing a studio with a bunch of modern comics in a show every person of his advancing years hated? I may be wrong, but I doubt Connor would have liked Blackadder until the day the script boinged through his letterbox. As a Carry On veteran, he was well-versed in racy humour, of course, but by this time racy humour was old hat and prejudicial and now the ambiguity had been dispensed with. People didn't use euphemisms, and they did swear. And here was Connor, in his 70s and with a distinguished CV behind him, being asked to lower himself like this. 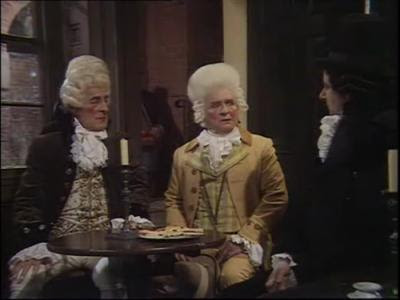 And, of course, he did it. He accepted the part of Mr Mossop, put on a yellow jacket and a curious wig, had his face covered with correction fluid and, alongside the equally square-pegged but utterly marvellous Hugh Paddick, delivered a brilliant, brilliant performance in the Sense And Senility episode of Blackadder The Third. He even said "shit"! I don't know if he had grandchildren, then or ever, but if he did I wonder if he mentioned he'd been asked to do this tatty, vulgar sitcom, and was told in no uncertain terms that it would be the coolest thing on earth if he did. That's why those MPs did that advert for Bananarama's Greatest Hits in 1990 and Anne Diamond went into the Big Brother house; they were earning rare hip points from their offspring.

Blackadder did this quite a lot. Naturally a part of an older person needed to be played by an older person - there wasn't a 1980s equivalent of Clive Dunn to be found - but rather than take jobbing actors on who were grateful for the exposure, the recruitment team went for establishment figures like Connor and Paddick. Think of Denis Lill's extraordinary tomato-faced bluster as Sir Talbot Buxomly, or Tom Baker's madcap stumpy sailor Captain Redbeard Rum, or Geoffrey Palmer's cold, uncivil Field Marshal Haig. And beyond that, even Vincent Hanna, not an actor at all, got on board to essentially play himself as a political anchorman, broadcasting to passers-by through the window of the usually empty town hall in Dunny-on-the-Wolds as Sodoff Baldrick swept to victory.

It's terrific stuff. And yet when this alternative movement, of which Blackadder was eventually seen as the moderate, barrier-breaking wing, got underway less than a decade earlier, I can only think all of these performers saw two minutes of Ben Elton being a div on the Oxford Road Show and pronounced all such material as garbage and pointless and without artistic merit. Then soon afterwards, they were reciting his words with glee and gratitude on one of our most endearing sitcoms.
Authored by Matthew Rudd
Email ThisBlogThis!Share to TwitterShare to FacebookShare to Pinterest
2 exclamations of response

This is marvellous. Have a good day at work!

Some of you who read this blog are proper clever clogs types, the sort who know that Kevin Ashman from Eggheads isn't amazingly intelligent, he just has a memory for facts. Ask him to explain some complicated scientific theory and he probably can't, but he can tell you where and when that theory was concocted and the person responsible.

So if you really want to be outfoxed by people on quizzes, there is still only University Challenge for that. I'm an avid viewer. I also suspect I'm a typical viewer; someone who a) initially only tuned in because they loathe EastEnders; and b) not only has no idea about the answer to the question, but struggles with following the question in the first place.

But, like all people with a mildly useful education but without the brain to take it to extremes, I get chucked a bone or two from Paxman's pile of cards. Usually they're within the music question (they may know Dvorak and Mozart, but one week I was shouting Thunderclap Newman at the telly while they all looked blank) and something related to wordplay. In last night's episode there was a question asking for the five words that meant five stated definitions, the only difference being the vowel in the middle. I gleefully yelled "BAT BET BIT BOT BUT" before the chap who got it right had managed to press his bell.

Most years, one contestant stands out and they're usually from the winning team. Last year it was that chap called Guttenplan who knew everything, argued with Paxman, ignored his team-mates and all while sporting a total vacancy and immobility in his eyes that suggested he was taking mind-expanding drugs.

The year before it was Gail Trimble, who pretty much single-handedly took her team all the way to glory with a huge brain, while earning many comments about her willowy, girl-next-door looks. Pity her incredible brainpower didn't extend to checking the rule of entry, mind. Her team was disqualified after winning the final as one of her colleagues had already picked up his degree and left university.

Many people hark back to Bamber's era, of course, though the only footage ever dug out of 25 years of the show's original incarnation is that of Stephen Fry umming and aahing over a question when appearing in 1980. There doesn't seem to be any footage online of the famous sabotage episode involving the University of Manchester team in 1975 in which they answered every question with "Trotsky" or some other revolutionary hero of theirs. It did teach me much later, however, why "Lenin" was included as an answer in the joyful spoof episode within The Young Ones.

I do remember a Comic Relief version in which two celebrity teams faced one another, billed as Gownies (graduates) versus Townies (school of life types). The Townies won, courtesy of Danny Baker spending precious extra seconds arguing down the claim that Marc Bolan played guitar on River Deep Mountain High. The Gownies team was introduced by Angus Deayton as "graduates of the nation's most prestigious institutions, and Birmingham Polytechnic", at which point Frank Skinner raised his arms with pride.

It would be too obvious to embed something from that episode of The Young Ones. Instead, something just as delightful.