We don't need no education

I love my mum, but if she tried to defend me during the course of my work, I'd be mortified. It was bad enough having to go through the primary school rigmarole of parents' evening with her.

So James Blunt's mum defending her son's music and background might not have been enthusiastically welcomed by him. She contacted the Today programme after hearing a feature on how much more middle to upper class British popular music is becoming.

To be honest, all I knew about Blunt's background was that he was a soldier who saw action in the Balkans with his guitar strapped to the side of his tank. I didn't know anything about his education. I suspect that was because I didn't especially care, and I still don't. But his mum wading in has made him interesting for the first time since You're Beautiful entered the charts.

I'm not entirely sure he gets stick because of his education. I think he gets it because of his blandness. I'm sure classism exists in music just as it does in society but music is such a personal, divisive issue which allows barely two individuals to have identical tastes that it has to be about what emerges from the speakers, first and foremost.

Get Blunt to talk about his military background and he is a fascinating, articulate and very pleasant man - indeed, he's a cracking raconteur in a one-on-one situation; that tale about how he found his sister a husband on eBay is quite brilliant. However, get him to sing Goodbye My Lover and he becomes utterly excruciating. I think it's perfectly possible he could have been both interesting in speech and cringeworthy in song even if he'd attended the local comprehensive.

Still, it could have been worse. We could have had Keith Allen defending the expensively-educated Lily. I suspect that had he tried to do so, she'd have smacked him one at the next family gathering.

Now, into the weekend we go, with Blunt's willingness to send himself up...

Better than a hot tin roof

Been quiet today. Had a bad stomach and an attitude to match.

So, for the first time in ages, we revert to the big blogging getout strategy of bunging on a cute picture of the cats. Here are the four of them, captured pretty much in perfect symmetry. 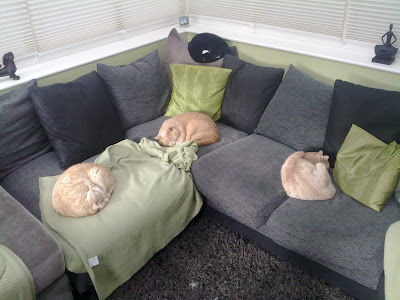 That settee was originally purchased for human slobbing, but they get far more mileage out of it. And the dirty looks that scorned cats are capable of when you rouse them from their 21 hour nap and usher them off - oooh, they could make your ears bleed.

Spoiled, boneidle, self-obsessed, and wouldn't have 'em any other way.
Authored by Matthew Rudd
Email ThisBlogThis!Share to TwitterShare to FacebookShare to Pinterest
0 exclamations of response 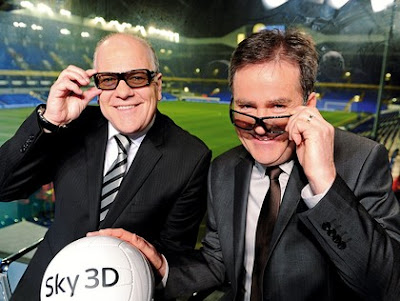 The sexism row surrounding Richard Keys and Andy Gray has, I think, caught a lot of people by surprise. The increased role and involvement of women in what has traditionally been a male preserve has, to my best knowledge, been very well embraced.

Then Keys and Gray, on either a hidden microphone or their own unnecessarily activated studio microphones (depending on who you believe among the technical types) open their gobs about a lineswoman more than half their age and threaten to put progress and equality in the game back 20 years.

It really is that serious. Women have been going to football matches for as long as men, but on the terraces it's an individual's world. Every supporter is responsible to themselves until or unless they break the law. They are not responsible to their companions, their clubs or the sport as a whole.

Two men paid handsomely to discuss, critique and promote the good of the game via the means of live television are responsible to everybody. If you don't like football, you can still justifiably express concern about what Keys and Gray said. If you do, then naturally more so.

Although Keys' comment about Karren Brady's newspaper column (in which she complained about sexism in the game) was crass, he didn't actually say very much. She, as the highest profile woman in the game, deserves protection from sexism but at least she has the power and position to fight back. A youthful, previously anonymous lineswoman has not. Implying that she would automatically struggle with the offside laws (not "rules", by the way chaps, but "laws") was beyond all reaches of ignorant, brainless and cruel.

Aside from the gender prejudice that shouldn't exist in any circumstance - and that includes getting the misandric Loose Women off our tellies as quickly as possible, by the way - this official would have gone through all the rigorous training, testing and initiation required by the game's governing bodies in order to attain a rightful place on the Premier League's officiating list. It isn't just an insult to her as a woman; it's an insult to her as a qualified, affiliated official of the game - which, I'd wager, is more than Keys and Gray are. And she's done it all by the age of 25. This isn't tokenism, this isn't a political stunt, it's a talented woman fulfilling her potential. And the decision she made for Liverpool's first goal, which had everyone screaming she was wrong prior to noting via the replay she was bang on, showed she had nothing to prove at all. Especially about her knowledge of the offside laws.

Keys has now telephoned her to apologise; no word as yet about similar act from Gray. He, as the ex-footballer, knows the inner workings and prejudices of the game better than anyone. It's a shame he's such a witless, hypercritical, cowardly, wise-after-the-event ignoramus behind a microphone - and that's when he is on air, by the way - because he was a brilliant player. One of the bravest centre forwards the game has ever seen. He put his head where the flying boots would go and would often emerge with a cut temple and another goal on his record. There was so much to admire about him as a competitor on the pitch, and yet so little, even before this latest spot of imbecilic behaviour, to laud him for as a broadcaster. And yet, at Sky, he is the main man among all the ex-footballers who chose to make a career out of pontificating about the game after they finished playing it. He's been there a long time and is as articulate a footballer as ever has transferred to telly. He gets an hour or so, sometimes more, every week to babble on about tactics and decisions and assume the whole footballing nation is putty in his hands. But he doesn't have great enough knowledge, which is extraordinary given his playing experience and the length of time he has been analysing the game on television. He isn't as good or as intelligent as he thinks he is, and judging by this unsavoury episode, he isn't fundamentally a very nice man either.

They shouldn't be fired, though I'd have had Gray out to grass years ago for just being dreadful. People have compared it to Ron Atkinson's awful diatribe against Marcel Desailly a few years ago but, well, let's be truthful - sexism is bad and hard to forgive but racism is far worse. I do look forward to how Keys and Gray address this incident when Sky eventually do let them back on the air, though as always with me, when they start talking about football, I'll switch over until the game they're previewing is ready to kick off.
Authored by Matthew Rudd
Email ThisBlogThis!Share to TwitterShare to FacebookShare to Pinterest
2 exclamations of response