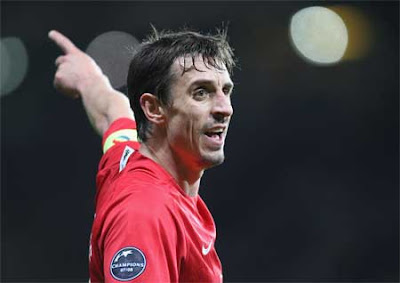 Football will be worse off for the retirement of Gary Neville, and even the type of flamethrowing, bile-spouting lamebrain that frequents terracing on Merseyside or at Eastlands may one day look at his career and appreciate a job well done.

Neville was the fan plucked from the terraces to play for Manchester United and, over a 19 year involvement that brought him countless trophies and more than 600 games, he never forgot he was a fan. This is what marks him out as a hero to Manchester United fans and as an out-and-out villain of the ABUs*.

As someone neutral as far as the clubs involved go, I thought he was fabulous. His playing abilities as a right back and leader were exemplary. His attitude was fantastic to watch. Whoever you support, the example set by Neville was how you want all of your players to be. Focussed, single-minded and very much as in love with the football club as you are.

He could be a troublemaker, of course, but mainly for himself. Rarely did he commit felonies that would cause real woe for others, unless that involved celebrating a goal a little too vociferously, leading to Liverpool fans tearfully crying to football phone-ins and deciding that their delicate constitutions couldn't take a Manchester United fan, in Manchester United kit, celebrating a Manchester United goal in front of them. Neville got carpeted and fined for that, ludicrously, and correctly complained afterwards that the authorities expected players to act like robots and not let emotion get into the game.

His leadership skills and willingness to stick up for his fellow player earned him the 'Shop Steward', 'Red Nev' and 'Citizen Nev' tags, with T shirts printed that superimposed his face - and much-derided bumfluff moustache - on to the image of Che Guevara. Depending on who you were, that T shirt was either an insult or a huge compliment. To Manchester United fans he provided the opportunity to sing of their own dislike for those further west on the East Lancs Road with the song "Gary Neville is a Red ... he hates Scousers."

To people who don't like football, this kind of tribalism is baffling and irritating. And I agree, it is. But to those of us whose hearts are attached to the game and to our clubs, it's a basic human need. All bets are off, loyalties only go one way. Neville was a rare example of that on the pitch, representing the many thousands off it.

If he had been released by Manchester United around the age of 30, like his contemporary Nicky Butt or his own brother Phil (see the song above), I expect he would have retired. He would not have been emotionally capable of playing for anyone else. He'd have been rich enough, even though prolonging his career would have made him richer. But he is a proper Manchester United loyalist, boy and man, with the correct accent and (roughly) the correct upbringing. I say "roughly" because the Nevilles (dad genuinely called Neville Neville) are from Bury and of course there is a distinguished lower league team right there that could have taken their support. But at least, unlike his big pal David Beckham, he had a north west background to make him feel authentic as a Manchester United nut.

Beckham owes much of his career success to Neville. They were a partnership on the right flank for club and country for many years and Beckham's finest performances and biggest shots of confidence came when he had his longtime pal - they met at 16 in the youth team - in the space behind him. Beckham has 115 England caps and still harbours a hope of getting more; Neville ended with 85 and should have had his own 30 more but for injuries.

People forget that Neville was the first of those Fergie Fledglings to make the grade internationally - he was in the side 18 months before Beckham and a whole two years before Paul Scholes - and he was the 21 year old newbie in an England team of superstars - Gascoigne, Pearce, Shearer, Ince, Seaman - that was within a penalty kick of the Euro 96 final, backed by a home crowd and a brilliant football song. He provided that cross for Shearer's header against Scotland; he was also suspended for the semi-final against Germany that England lost but would have been back in place for the final in the event of victory. He has made more appearances for his country at the European Championship finals than any other player.

Though his impeccable standing within Old Trafford suggests a coaching role is next for him, many are claiming that Neville would be the right man to become lead pundit for Sky Sports, as Andy Gray's replacement. I'm all for this. He's clever enough, he's relevant, he knows the pace and the requirements of the modern game, he has no fear of live occasions. When Gray was on telly, I turned the sound down and waited for the match to start. If Neville takes over, I'm watching.

The only people bleating about this are, naturally, Liverpool and Manchester City fans who are equally scathing of the prospects of him being complimentary or even-handed with their side. Well, do you know what? He doesn't play for Manchester United any more. He wouldn't be on their payroll. So why shouldn't he be fair-minded? He's not a fool. He knows what professionalism is better than anyone.

Football is the poorer without him. Aside from Ryan Giggs - 18 months older than Neville and now in his 20th calendar year since making his Manchester United debut - there isn't another player like him in the Premier League. Sure, Liverpool can point to Steven Gerrard and Jamie Carragher, but one has been all too ready to quit his beloved team in the past when pound signs have been in his eyes, and the other was a boyhood Evertonian. Chelsea have John Terry but you can hardly say he has conducted himself well as a human being, beyond any daft things done on the pitch. Neville's inclusion on tabloid front pages has been next to zero by comparison. An outstanding defender and an outstanding man has left the game of football. There aren't many who will grow up to be as good as Gary Neville was.

* (Anyone But United - colloquial term given to all football fans who prefer Manchester United to receive no plaudits or honours)
Authored by Matthew Rudd
Email ThisBlogThis!Share to TwitterShare to FacebookShare to Pinterest
0 exclamations of response

Make someone happy with a phone call - me

Did you pick up my mobile last night? If so, please use the phone book on it to call me. At some point on the short walk back to the car after last night's football match. I lost it. Irritatingly, I didn't notice until I'd arrived home, wasting half an hour of valuable step-tracing time.

I went straight back out and searched but, of course, it was nowhere to be seen. I knew it was lost on a lit main road as I'd used it on part of the walk and then, I presume, slipped it into my pocket only for it to fall out and, annoyingly, I never felt or heard it leave my person and hit the ground.

So, at pushing midnight I was cancelling the SIM and changing passwords on my email and various web sources - Facebook, Twitter, my bank, one or two others - so that nothing could be accessed dishonestly in my name. What a rigmarole, honestly. Some precious photos are gone, as are all my numbers. And I feel odd without having it there.

We all get occasions where we send a text to someone and they reply with: "Who's this? I've lost my numbers and this is a new phone". The next time it'll be me. That's if I don't re-search the car in daylight and find it within the seat, wedged in a place that fingers combined with midnight darkness simply could not reach.
Authored by Matthew Rudd
Email ThisBlogThis!Share to TwitterShare to FacebookShare to Pinterest
4 exclamations of response

I haven't been able to access this new police "crime on your street" website yet. This is hardly surprising, as yet again a site has been launched that has obviously interested the whole web-browsing nation and yet does not have the capacity to cope with demand.

I'd like to know from a techie type - if I can't access the site, does that mean it's down for everyone? Or is there a first come, first served thing going on, whereby a number of people can access the site at once, and the rest have to keep refreshing until they get in?

This probably happened yesterday too as everyone filed their tax returns - certainly the HMRC site has crashed on deadline day before, leaving people willing to pay up on time unable to do so, and presumably appealing against late payment fines afterwards. And try booking concert tickets for a major band, or going to Glastonbury, or acquiring seats for the FA Cup final on the days they go on sale and .... duh, site error. By the time it works again the tickets have gone.

Don't arouse our interest in something major if you haven't the tools to back up the frenzied demand you're going to create. Fortunately, this is not I problem I ever envisage for this blog. I'm stunned you're here at all, to be honest. But thanks.

I'm interested by the official stats for my street, which is why I went to the police site in the first place. But as far as I know, the only crime we have round here is the shoddy way No.9 parks his van.
Authored by Matthew Rudd
Email ThisBlogThis!Share to TwitterShare to FacebookShare to Pinterest
2 exclamations of response