My father-in-law passed away on March 9th, aged 91, and it was his funeral today. This was the passage I recited during the service.

Go placidly amid the noise and haste,
and remember what peace there may be in silence.
As far as possible without surrender
be on good terms with all persons.

Speak your truth quietly and clearly;
and listen to others,
even the dull and the ignorant;
they too have their story.

Avoid loud and aggressive persons,
they are vexatious to the spirit.
If you compare yourself with others,
you may become vain or bitter;
for always there will be greater and lesser persons than yourself.

Enjoy your achievements as well as your plans.
Keep interested in your own career, however humble;
it is a real possession in the changing fortunes of time.
Exercise caution in your business affairs;
for the world is full of trickery.
But let this not blind you to what virtue there is;
Many persons strive for high ideals;
And everywhere life is full of heroism.

Be yourself.
Especially, do not feign affection.
Neither be cynical about love;
For in the face of all aridity and disenchantment
It is as perennial as the grass.

Take kindly the counsel of the years,
Gracefully surrendering the things of youth.
Nurture strength of spirit to shield you in sudden misfortune.
But do not distress yourself with dark imaginings.
Many fears are born of fatigue and loneliness.

Beyond a wholesome discipline,
Be gentle with yourself.
You are a child of the universe,
No less than the trees and the stars;
You have a right to be here.
And whether or not it is clear to you,
No doubt the universe is unfolding as it should.

Therefore be at peace with God,
Whatever you conceive Him to be,
And whatever your labours and aspirations,
In the noisy confusion of life, keep peace with your soul.

With all its sham, drudgery, and broken dreams,
It is still a beautiful world.

The author was Max Ehrmann, an American prose poet. He wrote it in 1927. I thought I'd share it today, even though it's a reasonably well-known piece of work, especially since the similar Wear Sunscreen was published a few years back.
Authored by Matthew Rudd
Email ThisBlogThis!Share to TwitterShare to FacebookShare to Pinterest
2 exclamations of response 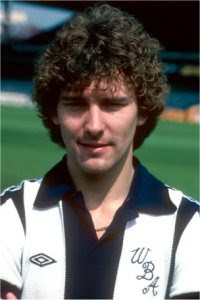 As the most classless, charmless (and tedious) debate rears its ugly head about who should be worthy of captaining the England football team for the next game, out comes the news that Bryan Robson is suffering from cancer.

This man was the best captain of the England team in my lifetime, and also one of the best players. Many supporters were programmed instinctively to dislike him at club level because he played most of his career at Manchester United but he commanded respect from all across the game, especially when his number 7 shirt was white and bore the three lions thereon.

It is unfortunate that Robson, as far as his England career is concerned, is remembered as much for the games he didn't play in as those he did. He won 90 caps over 11 years but missed a substantial number of matches during this period because of just about every injury and niggle a footballer lacking in luck can suffer. At the age of 20, when still a curly-permed West Bromwich Albion player, a good few years before England took a look, he broke the same leg three times in one season. By the time he joined Manchester United in 1981, at a record-breaking £1.5million, he was a regular international but still amazingly prone to injuries. It was a rare occurrence for him to complete at least three quarters of a club campaign.

Robson played at three World Cups but went home early from two of them. Famously in 1986, he joined the squad bound for Mexico after corrective shoulder surgery and then promptly put the shoulder out again in a group game against Morocco. The sight of him being led from the field in utter agony by a member of the England medical team, his shoulder delicately held still by a combination of a gentle hand and a makeshift sling, became the image of England's campaign, especially as it had started badly in terms of results too. All seemed to be going wrong. By the time England picked up their form and progressed to the quarter finals and Diego Maradona's act of callousness, Robson was at home in Cheshire with his arm strapped up.

In the 1990 tournament, he suffered an Achilles injury in the group stages and again had to go home, this time with less fanfare - he was 33 and the team was more experienced around him than in 1986 - and with a spot of ridicule in the ears over his decision to fly in a 70 year old faith healer as a last resort to try to make him fit. It didn't work, but incredulous stories still emerged from the England camp about blue sparks flying out of her fingers.

For the frustrations over his second and third World Cups, his first was a personal triumph and installed him as a mainspring for the team over the next ten years. At the 1982 finals in Spain, a 25 year old Robson was one of the younger players in a decidedly ageing squad and he scored two goals in the opening game against France, including one that went in after 27 seconds and became - and remained for 20 years - the fastest ever at a World Cup. He was given a gold watch for the achievement.

Robson was one of those swashbuckling, ageless midfielders who led players with youth and more craft by virtue of his attitude. He was never afraid of a tackle and did bravery better than most, sometimes too well. He covered so much ground during a match and was one of the more prolific goalscorers for a man of his position, despite not being blessed with amazing skill. He was a performer, an all-rounder, with a killer left foot and a surprisingly effective spring in his step that brought him many headed goals. He was a selfless player too, such as the occasion he eschewed the chance to become the first player to score a hat-trick in an FA Cup final for 30 years when, having already got two of United's three against Brighton in 1983, he insisted on Arnold Muhren taking the penalty that made it 4-0 and completed the rout.*

His survival at Manchester United when Alex Ferguson took over was an achievement in itself, given that Robson was the only member of the infamous United drinking club to avoid Ferguson's cull in the late 80s. Robson always put it down to having a metabolism that allowed him to run for fun in training, even with a severe hangover. Those who didn't take delight in Manchester United finally winning a League title after a generation of waiting must have at least seen the medal Robson got, at the age of 36, as just reward for a long and fruitful career. It had been quite a wait for him, with a few near misses, and that moment in 1993 when he held up the trophy (alongside team captain Steve Bruce - Robson wasn't playing that much by now) capped his career properly. A title medal, to go with three for the FA Cup, one for the League Cup and one for the European Cup Winners' Cup, seemed just reward. He won another the next year but was left out of the FA Cup final side as United won the 'double', and promptly left to go into management.

Ah, now then, management. This is where Robson's reputation has been rather tarnished, and it is no lie to suggest it's not something he is cut out for. At Middlesbrough, he took the decision to withdraw from a fixture against Blackburn Rovers due to a virus that had decimated his squad, only for the points deduction that followed as punishment to directly condemn his side to relegation. He indulged star signing Fabrizio Ravanelli for the 1997 FA Cup final, even though the egotistical Italian was clearly unfit, and eventually lost his way so much that Terry Venables had to be brought in to steady the ship and give the players the standard of coaching and tactical awareness they needed. Robson stayed at Middlesbrough far too long - indulged as he was by a chairman whom some say was refreshingly loyal, others say was amateurishly starstruck - and the rest of his managerial career at club level didn't recover.

He saved West Bromwich Albion, his first club as a player, from the drop as much by some utterly freakish results elsewhere on a bonkers last day of the season as his side's own victory, apparently using the gold watch from 1982 as an inspirational symbol for his players to focus on, but was dumped quickly the following year when it was apparent they were heading the same way. He didn't last long at all at Bradford City, while his time at Sheffield United was equally as damning to his credentials as a manager, and he stayed for mere months before getting the chop. After Middlesbrough, he became known, not entirely unfairly, as a manager who was appointed for who he was rather than for what he could do. A lot of chairmen still make that error with other great players now.

He's the coach of the Thailand national team today, and his success there will be dependant on the standard of players available to him and the patience of his national association. Thailand has employed a handful of English coaches in the past and has yet to qualify for a World Cup, so Robson may well be on a hiding to nothing. The fact that he still works despite making his money (he founded the Birthdays greetings card business while still playing) says a lot for the man.

He had his diagnosis and surgery while in Thailand, and the whole of football will wish him well.

*It was a replay, rather than the final itself, which would in many eyes have devalued Robson's achievement had he taken and scored the penalty. Also, as BBC commentator John Motson said as Muhren lined up the kick, the Dutchman had never before taken a penalty for either of his English clubs, so why he took this one was a mystery. Stan Mortensen's 1953 hat-trick remains the last in an FA Cup final.
Authored by Matthew Rudd
Email ThisBlogThis!Share to TwitterShare to FacebookShare to Pinterest
2 exclamations of response

"I want to be completely open about myself and my life..."

Coronation Street, then. At the moment Dennis Waterman's ex-wife is grilling Wendy Craig's screen son about a phantom woman while being watched by Leonard Rossiter's fictional secretary and fantasy squeeze.

Elsewhere, a Chinese girl is on the point of deportation back to a country her vocabulary and strong Home Counties accent suggests she has never visited before in her life, and so we're on to the prospect of a convenient marriage to save her.

A girl still in school uniform declares to her ginger boyfriend she wants a baby, and the ginger boyfriend, always held up as a sensible, switched on lad, agrees. His brother-in-law, brutal killer of at least one person and culpable in the demise of two others, stays unmentioned and unmissed in a clinic for the bewildered, which one assumes forms part of a long-term plan to prevent him from being convicted of murder at any point in the near future.

I love Coronation Street and always will. But boy is it struggling after the tram crash.
Authored by Matthew Rudd
Email ThisBlogThis!Share to TwitterShare to FacebookShare to Pinterest
2 exclamations of response