Disappointing, so it was 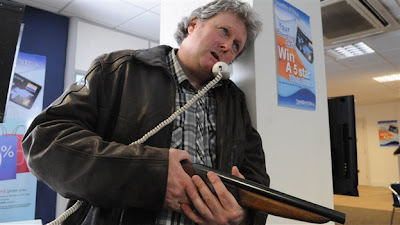 Oh I know it's fictional and I shouldn't get worked up about it, but it irritates me so much when Coronation Street screws up. And yet again, they've come up with a storyline that sacrifices the superb Jim McDonald just to come up with an exit point for another character.

Last night's botched robbery of the "Lancashire & Fyle" building society, as Jim resorted to desperate measures to get the dosh needed to buy the Rovers Return for Liz, was appalling. Jim's supposed to be a streetwise hothead, a man not blessed with patience but certainly with experience and knowledge, and yet we're expected to believe he would be so unprepared and slipshod in trying this robbery.

Firstly, he sits against a statue outside the building for quite some time, undisguised, casing the joint. Every town and city centre has CCTV and whether he would eventually escape with the swag or not, he could easily be identified via the archive footage.

His only effort at shrouding his identity upon approaching the place is via a grandad cap. He didn't bother with the balaclava, nor the Postman Pat mask, just a bog standard cap. He then joins the queue, carrying a large holdall, looking shifty.

Upon reaching the front, he unsubtly removes the shotgun and sternly tells the young cashier he wants her to put £120,000 in the bag. Why was he so specific? It may have been the amount he needed to purchase the boozer, but it meant she had to do as she was told and meticulously count the money, delaying matters, rather than just "fill the bag up and look sharp about it".

And, the biggest bugbear at all - surely someone like Jim McDonald, a convicted killer, would have known that a cashier can press a secret alarm the moment they are threatened by a robber? The cashier did this before she'd even raised from her seat. These alarms are the single thing that deter would-be bank robbers who want to get out of the building alive, and without shooting hostages, from carrying out such acts.

Naturally, the police seemed to take forever to get there but nonetheless Jim nearly made it, only seeing his plan fall apart when he bumped into someone as he tried to leave, opening the bag and causing panic when the gun fell out. A few screams and one brave customer clumped in the face later, the siege was on.

So, in order to find a get-out for the departing Liz, the Coronation Street scriptwriters have sacrificed Jim again. Presumably he'll get quite a stretch for this, having only been out of prison a year or two for the (still dodgy) manslaughter of Jez Quigley, and so any hope of Jim becoming a regular character in Weatherfield again goes for a burton.

Of course, perhaps Charlie Lawson is happy with being a cameo performer these days and has ample work elsewhere in his industry to undertake. But yet again the only McDonald left in the street is going to be Steve, whereas in fact the whole four of them remain dynamic and superb when together. It's a shame it now happens so rarely - so presumably we have to wait for Steve to get married again before we see them.
Authored by Matthew Rudd
Email ThisBlogThis!Share to TwitterShare to FacebookShare to Pinterest
2 exclamations of response