The Duke of Edinburgh and his wacky capers 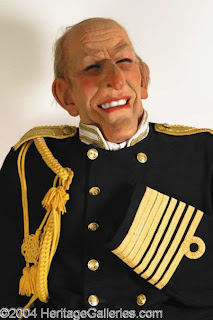 Prince Philip is my favourite member of the Royal family, because he appears to be the most like us. Okay, so he is extraordinarily privileged, but he has a gob and uses it. I've always liked that about him.

Which is why I was disappointed with last night's ITV1 programme charting his life as he approaches his 90th birthday. The trailers suggested loads of banter with the man himself, yet there was actually very little in the broadcast programme. The majority of it was background narration or interviews with historians, aides and other family members. We heard more from Princess Anne than we did from Philip himself.

It has been quite a life. I had no idea that he had to give up an entire career in the Navy when he became consort; I assumed that he maintained some element of day to day involvement with his job rather than accompanying the Queen absolutely everywhere, and only became a full-time companion to her duties when the pair of them were older. And judging by the programme, he was rather bitter about that.

That comes from marrying an heiress whose dad has a history of health problems. I'm assuming Philip married Elizabeth while hoping they'd get 20 or so years together in waiting before Bertie fell from his perch. As it was, they got less than five years together.

I also had little notion of just how close he was, by blood and, onward from that, by his blood's choice of marriage, to the Nazis. A turn in one other direction could have seen him fighting on the "wrong" side. His sisters were in exile from knowing their little brother's new relatives for years because of their own connections to a country we'd just defeated at war. Few of his relatives came to his wedding, even without dubious husbands, because of the potential public outcry. Given the pressure on this 26 year old bloke already in taking the future monarch as his missus, to have next to no familiar faces around him must have been tough. And I expect there were some people scarred by war who didn't want him as a consort of the future because of his connections, irrespective of his personal record during the conflict.

Unfortunately, all of this information came from the talking heads who formed the ballast of the television programme. Philip's contributions were rather scathing, rather cynical, not helped by the interviewer - Alan Titchmarsh - phrasing the questions in a manner that allowed the Duke a riposte of some description and a pathway down which he could walk and avoid the answer we hoped for. He wasn't asked directly on the final edit about his relationship with his children, his struggles with Princess Diana, his longtime role as someone two steps behind his wife.

I loved the quote about the fundamental difference between he and Prince Charles though. The two essentially have the same interests and ideals but "he's a romantic and I'm a pragmatist". It is that pragmatism with life and with society that endears me to Philip more than anyone else.

And, of course, he is known for putting his foot in his mouth...