Back from France then, after ten days. Same venue, same accommodation and much the same attractions and experiences. Took a few snaps... 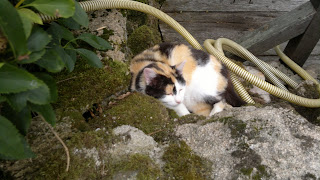 The neighbourhood is down to one cat. The battered grey tom, Scabby, seems to have encountered one French winter too many while Pinky, the tail-less tabby that was one of numerous kittens, has also succumbed. Perky, so called by default as Pinky's name came by virtue of a pink stump where her tail was once, is now alone and, it seems, a bit lonely. She's still independent, wandering the terrains over a good distance between houses and farmland, but now spends more time with you once she's established that you're around. The fact that she knows biscuits and Whiskas are in the house ("for the cat we don't have") probably influences her sudden bout of homeliness. But as soon as the sky darkens she's off, hunting live prey and a more excitingly acquired feast. 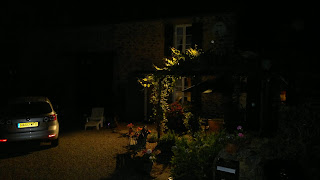 The house at night, courtesy of a simple security light. I'm rather pleased with this photo. 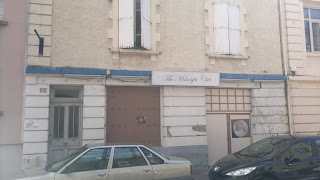 Something you're often told by people more familiar with French places than yourself is not to be put off by the exteriors of buildings when choosing a restaurant. I fear, however, this does not extend to nightclubs. This is what a Limoges nightspot looks like by day. Tempted? Well, if you are still unsure, then maybe a close-up of the little poster on the door will assist... 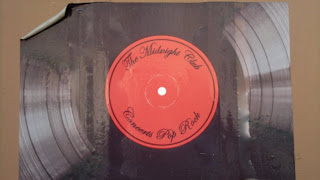 Yes. Concerts, pop, rock. Count us all in. The French tend not to do late night hellraising and dancing in even its medium-sized cities. I can't help but believe that places like this are for non-locals of a certain nationality. While I love a good night on the town via a sizeable number of ales, it's when you visit France that you realise just how pointless such British ways of unwinding can be.

On the Sunday of the break, the Limoges brocante was once again taking place. Loads of tat to feign interest in. First up... 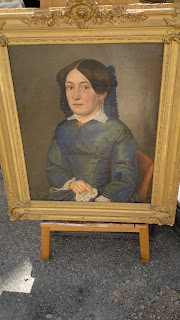 I expect more flattering portraits of David Mitchell than this have been painted. 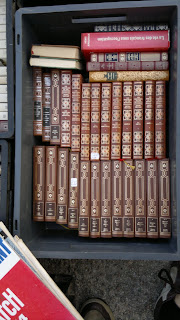 Of all the items I photographed for this blog last year, I couldn't find any of them still intact and unsold this time round. Last year we had the (presumably) complete works of Emlie Zola, this year it's Victor Hugo. I was especially disappointed not to find the 7" single by Dave, but beyond that I couldn't find any 7" singles at all this year, which struck me as odd. 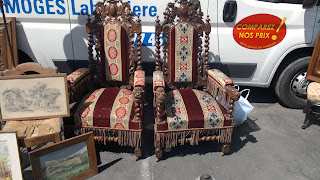 I thought it was a droll, if not original, observation that these two fancy chairs resembled the thrones that the Beckhams seated themselves in when taking their vows. Explaining this in French to the woman who was flogging them was beyond all realms of pointless and only of ultimate benefit to my conversational skills. She didn't know of nor care for the Beckhams - fortunate lady - and just wanted to know how much I'd pay her for the chairs. 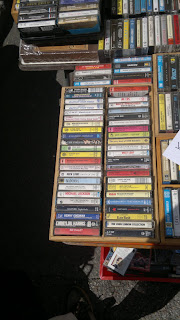 To be honest, if I'd photographed every box of cassettes on sale I expect Jon, John and Mondo would have been satisfied visitors to this blog for the rest of the year, such was the number of boxes on sale. I was sort of tempted by this one just because Too Low For Zero by Elton John was in it. 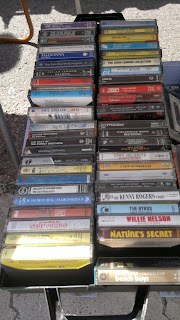 Oh go on then, have another.

This roadside sculpture gubbins is what has become known among my lot as "the spikey thing" and gives an indication that we are about to join/leave the all-important Francilienne during the car journey. That's the relatively new Paris ring road, akin to the M25 except on the Francilienne cars tend to reach the maximum speed limit rather than merely aspire to. 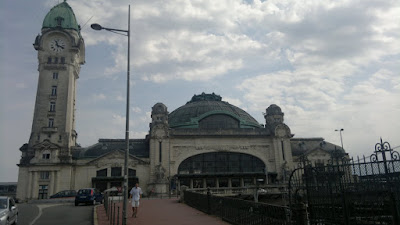 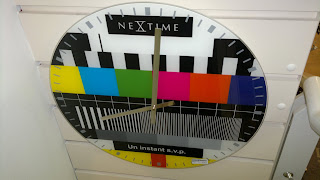 Last year it was a test card lavatory seat, this year it's a test card clock. Purchased for a friend, and my mother is on bog seat patrol (so to speak) for the rest of the summer. 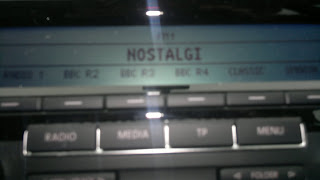 "NOSTALGIE ... IN THE SUNSHINE ... IN THE SUMMERTIME!" This was the national gold station tuned in on the car radio throughout the holiday. With only three links an hour and minimal ads, it was a veritable jukebox of older hits, though the remit was for 40% French tunes, meaning there was lots of stuff we neither knew nor understood but enjoyed nonetheless. There were a good fistful of English hits turned into French ("C'est La Meme Chanson" was a particular highlight, especially as the fresh lack of rhymes brought on by translation didn't seem to matter) while the station's own edit of Africa by Toto consisted of all of the verses first, prior to the chorus three times and a quick fade. Despite French jocks and French ads, every jingle (and there were loads of them) was in English. Oh, and you'll be thrilled to learn that the Autoglass advert jingle so frequently heard on UK commercial radio has a French equivalent. I retuned briefly during a short supermarket trip and found a local station happily, cheerily, unashamedly and innocently playing the unedited, unsullied, uncensored version of F**k You by Lily Allen, which the French jock back-announced with more than a hint of smugness in his voice.

Right, that's how my holiday went. At the very least these photos prove that the camera on the Nokia N8 is pretty swish.
Authored by Matthew Rudd
Email ThisBlogThis!Share to TwitterShare to FacebookShare to Pinterest
2 exclamations of response