We must perform a quirkafleeg

Ages ago, I started playing an online version of Manic Miner, the ZX Spectrum game of the mid-80s that was both innovative and addictive. Well, that did stop. Eventually.

Now I'm doing the same with the game's more prestigious brother, Jet Set Willy. Unlike Manic Miner, which I was reasonable at as a kid, I am finding this one very difficult, to the extent that I am in cheat/coward mode each time I play it - ie, I choose the 'endurance' option, meaning I can die as much as possible in the process of searching the various rooms for flashing things.

However, when time has allowed (I am pleased to say the work schedule has been packed of late), I have resolutely continued playing this game. I have at last sorted out The Banyan Tree's odd climbing procedure, negotiated my way into the lower section of Under The Roof (which was vital to success but took bloody ages) and even successfully scaled the rope of The Swimming Pool.

That last point is cogent to the fourteen people in the whole world still interested in playing Jet Set Willy, as the difference to the Spectrum game is at its most stark when you find yourself needing to undertake a manoeuvre that ideally requires a joystick. I don't have a joystick. I have a keyboard, and a Mac keyboard at that, meaning I'm using small arrow buttons for left and right and the space bar to jump. Climbing to the top of the three ropes in the game - one of which, on The Beach, is apparently impossible as there is seemingly nothing at the summit to scramble into - is very hard indeed when just pressing keys.

Looking at the map available online, it appears I have acquired most of the flashy things at one point or another during games. However, variations of the game have appeared that have introduced further rooms, further zones and one or two 'special' chambers of utter doom in which Willy is impossible to control. I therefore am not in a position to know just how close I am to being allowed past the fearsome housekeeper and into bed.

And this housekeeper remains my main problem, which I doubt I will ever solve. There is a room called The Nightmare Room, fairly close to the beginning of the game. In it, Willy changes to a bird - identical to a handful of killer birds to be found in other rooms and zones further along - and there is one crucial flashy thing to collect, all while avoiding lots of cloned killer housekeepers who are moving up and down at differing paces. I can tell you now that this room, and the collection of the one flashy thing within it, is impossible to conquer with a Mac keyboard, and I'm now just collecting everything else and claiming a pyrrhic victory, prior to throwing myself on the mercy of the real housekeeper (and then emerging back into civilisation). I am at a loss as to what else to do.

Apart from grow up, obviously.
Authored by Matthew Rudd
Email ThisBlogThis!Share to TwitterShare to FacebookShare to Pinterest
2 exclamations of response 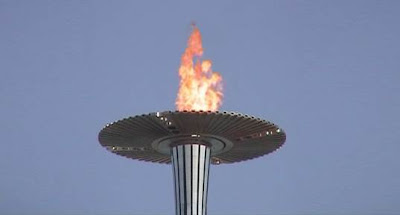 When there are 365 days to go a big event, is that news? Every media outlet has gone bananas today over the fact that in precisely one year's time, Sir Ian Botham will light one of his farts* and get the Olympic flame burning in London, with the world watching.

It isn't news. It really isn't. Yet broadcasters have done entire shows from the half-finished venues and everyone has it in their bulletins and publications. Will the first anniversary of the Games in 2013 warrant a two paragraph piece? Of course it won't. Yet date-related news stories should surely only refer to the pertinent year or subsequent anniversaries, not in advance. Hell, the Olympic organisers even felt obliged to spend money - within a budget that's roughly £7bn more than initially estaimated - on commemorating the event with a ceremonial first view and use of the facilities, hence why Tom Daley had to dive into a brand new pool at 8 o'clock this morning for the benefit of cameras and microphones.

I felt obliged to mention it on the breakfast show I covered this morning and kept cocking it up because I didn't know how to phrase it. I've never had to explain that "today is the day when in a year's time something big will happen" before, and nor would I ever expect to.

For once, my grievance isn't around London-centricity, as it's evidently the only place in Britain that could ever host the Olympic Games. I adore Manchester, but when it went after the 2000 Games ("Oh Athens is a city of towering spires, oracles ancient and grand; it's the ancestral home of the Acropolis, the birthplace of sport and of culture and art; but it's not half as handy for Salford") it was a joke bid, simply because no Olympic committee - straight or corrupt - would ever have given its signature event to a country's third city. In fact, unlike many, I'm all for the Olympics here, despite it going over budget and a sense of dread over what right-on crap will be depicted as typically British in the opening ceremony. Once the Games are underway, I'll watch much of it.

But until they actually begin, the only news story related to it will concern the progress of the competitors and the development of the venues. Not a date on the calendar that everyone knew was coming anyway.

The Paralympics, by the way, begin on August 29th 2012. Let's see if everyone goes bonkers when the equivalent date this year reaches us in just over a month.

*might be Sir Steve Redgrave, really (but not lighting one of his farts)...
Authored by Matthew Rudd
Email ThisBlogThis!Share to TwitterShare to FacebookShare to Pinterest
3 exclamations of response