"Who did it? Was it Captain Lancaster?" 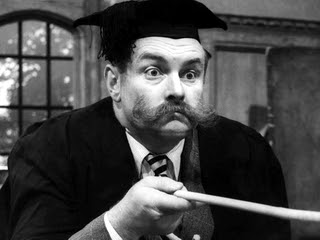 Glory, glory, hallelujah
Teacher hit me with a ruler
The ruler broke in two, so she hit me with a shoe
And my bum went black and blue.
Corporal punishment is under discussion today. A survey has suggested that more than half of parents questioned would approve of its return in secondary schools.

I got smacked on the backside with a slipper* and also a twelt on the palm with a 30cm ruler** during my primary school days, but fortunately for all concerned, corporal punishment was outlawed a year or so later.

You can't justify violence against kids in any circumstances whatsoever, even if the kids are evil and spiteful, which, let's be honest, some clearly are, and even if they are big enough to fight back.

I suspect the parents who would care for the return of corporal punishment are a) parents of kids who never get in trouble (and therefore, if their kid ever got a lawful twelt on the palm with a ruler, would complain to every individual and sue every authority in existence); and b) parents who don't instil enough discipline at home and think their child's behaviour in school is the school's responsibility.

Campaigners in favour say it will make kids learn discipline. My view is that it will make them more shrewd when it comes to getting found out, and glamorise the use of violence for allegedly "positive" reasons. The short-term pain for the kid will be to the long-term detriment of everyone else.

Also, the "never did me any harm" brigade consistently fail to notice that it did do them some harm, as they now advocate the beating of children in a civilised society rather than accept that their own experiences should be something they wouldn't wish on anyone else.

Lastly, a lot of kids in school get unfairly punished for stuff they didn't do. Any kind of punishment for an innocent person is one punishment too many, but if it involves physical discomfort and mental scars, then that is unforgivable.

I'm being a right lily-livered sort here as I don't know what the best answer really is. I know I'd like parents to back the schools a bit more when news comes through of a child being bad. But I'm pretty certain that smacking children under 16 is the worst answer of all. Moreover, I suspect that teachers themselves would simply refuse to administer corporal punishment even if it was re-introduced.

*telling a dinner lady to "go pick yer bum", if you must know. I was seven and totally stitched up by an 11 year old tell-tale tooley at my table. I still actually hate him quite a lot even though I barely ever saw him again.
**genuinely can't remember what the crime was, but I remember the teacher and room concerned and was therefore eight years old.
Authored by Matthew Rudd
Email ThisBlogThis!Share to TwitterShare to FacebookShare to Pinterest
1 exclamations of response

"Bring on the Vita Wonk!" 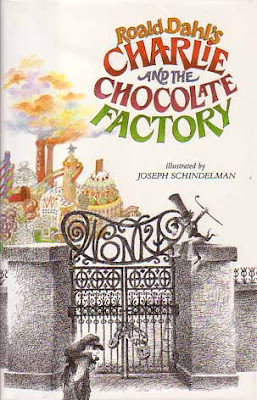 Like every child with working eyes and an imagination, I devoured Roald Dahl's books. This week's story of his decrepit hut where he brought his characters to life is both enlightening and depressing.

However, when I think of him now I think, rather churlishly, of his major continuity error. Charlie And The Chocolate Factory, his most famous and most reproduced work, was a glorious read. Then out came the sequel, Charlie And The Great Glass Elevator.

If you remember, via either book or film, the original story ends with Charlie being told by Willy Wonka that he was giving him the factory as a gift, and the whole family - mum, dad, four extremely elderly grandparents - could all move in too. And so the factory's transparent portable lift crashed right through the roof of the Bucket family's tiny home and collected the remaining members of the clan, the three bed-bound grandparents pushed in via their bed, still in their nightshirts.

Then, via the book, the sequel took us into space and a bit of a to-do with the American government and the Vermicious Knids, before Wonka revealed his new sideline into health foods with Wonka Vite - the pill that would take 20 years off your life. The three bedridden grandparents - who, incidentally, had taken an illogical dislike to Wonka despite endorsing Charlie's hero-worship of him in the first book - took far too many pills each. Grandpa George and Grandma Josephine went back to being babies, and Grandma Georgina disappeared entirely.

Now, here lies the problem. For this storyline to work, Dahl put words into secondary characters' mouths that revealed that the three affected grandparents were 81, 80 and 78 respectively. Yet in the first book, when first describing them, he said that all four were over 90 and Grandpa Joe, who didn't do Wonka Vite as he was long already up and out of bed for his trip round the factory with Charlie and didn't think Wonka had anything to prove, was labelled the eldest at 96 and a half. As all three remaining grandparents took four pills each, they should all have been reduced to school age children, not babies or glints in the muffin man's eye.

Of course, the fantasy brilliance continued with Georgina's revival as a woman of more than 300 years of age ("the Mayflower!") prior to the introduction of Vita Wonk to revert the babies back to old gifferdom. And Dahl did write it beautifully. But he made a massive error. If this nine year old child noticed it, how on earth did he or his publishers not?

It's a bit late to get worked up about it, I know...
Authored by Matthew Rudd
Email ThisBlogThis!Share to TwitterShare to FacebookShare to Pinterest
5 exclamations of response 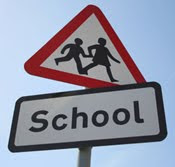 Just why do kids not seem able to walk to and from school on their own any more?

Took two dogs and a cat to the vet yesterday for their latest booster injections and check-ups, and it was a 3.10pm appointment. Now, the closest vet's surgery is on a side street in the small town where I grew up (but no longer live) and about three doors away from the pedestrian entrance to the primary school I attended between 1978 and 1984.

The road is residential, narrow and no-through, so it's accessible only from one direction. Cars that belong to residents already line the street as one side is terraced housing with no garages or driveways. The vet's place has a car park which is a bit of a tight squeeze but straightforward enough.

So, out I drive from the vets at about 3.25pm with two grumpy Basset hounds in the boot and a seething cat in a box, and the sight that greeted me was horrendous. It was like trying to exit the main car park at a football stadium five minutes after the final whistle. Cars lined both sides of the street; those shuffling up the road were entirely invisible to drivers like me trying to edge out and go in the other direction. People were doing seven-point turns to make progress or just get out of someone's way. I dread to think what the residents make of it.

And all because the kids needed picking up.

Now, as I understand it, primary schools are exempt from the "choice" element that is attached to secondary education and therefore every child, of all abilities, has an automatic right to a place at their local primary school until they are 11. This means that almost all of these kids rushing out to meet their parents yesterday would have lived within walking distance of the school.

I don't wish to be all "fourth Yorkshireman" about it, but when I attended that very school I went with my mum until my seventh birthday and then walked there and back alone while she went back to working part-time. I had the same pelican crossing to use across the busy main road and the same streets and lanes to gallop down with my mates. I have a good memory of school, and I genuinely can't think of any pupil around my era who got a lift in with mum or dad in a morning or a ride home afterwards, even those who had parents working at the school. There were some kids who were a stupid distance away towards Hull, right on the East Riding boundary, but they used to get a service bus each way.

If the kids all live within walking distance of the school then that obviously means the parents do too. So why not still pick them up but do so on foot? The exercise would be nice, it gives the kids longer to tell their mum and/or dad what they got up to that day and it doesn't completely snarl up an innocent residential street and annoy veterinary customers. Like me. I don't think the crime rate (especially in sleepy East Yorkshire villages and towns) is any worse now than it was in 1980 and so I can only assume that the parents who choose to take their kids to and from this school in their cars are a combination of lazy, paranoid and disorganised.
Authored by Matthew Rudd
Email ThisBlogThis!Share to TwitterShare to FacebookShare to Pinterest
6 exclamations of response