Working my way back to you

A lot of people have commented, with equal measure of praise and disdain, about how much work I've done lately. Wherever and whenever I'm on air, I tend to promote it on Facebook and Twitter, predominantly for reasons of pure ego, but also to remind future potential employers of my existence and current "popularity".

Anyway, this week, it screeched to a halt. An enchanted seven months or so of non-stop work on a total of ten different radio stations had suddenly had a vast, yawning crevice opened up before it. The calendar for the whole week was blank.

People at various stations ask me where I get my energy and appetite for all this work from, plus the patience to do all the travelling and stupid hours that go with it. My answer is simple: it combines a love of the job with a morbid fear of unemployment. For as long as someone thinks I'm of use, I'll keep doing it. And although I do want to be back on a full-time schedule, it's quite nice to be known - rightly or wrongly - by up to a dozen radio stations as someone reliable and versatile enough to step in and do the right kind of job for them when needed.

Have a nice weekend.
Authored by Matthew Rudd
Email ThisBlogThis!Share to TwitterShare to FacebookShare to Pinterest
0 exclamations of response

"She finishes at four, she'll be in the pub at five past..." 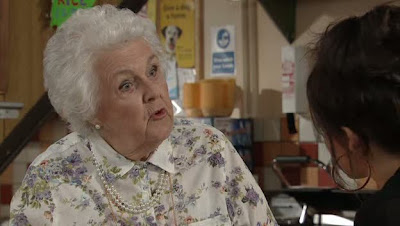 If you've ever read this blog with reasonable frequency, or had to put up with me for a while on Twitter, you'll know I'm a considerable devotee of Coronation Street. Well, at the moment the programme is taking some flak over its characterisation and storylines, and I'm inclined to agree.

The problem I think is that the older characters seem to have been left behind somewhat, and they are the key to the light and shade that Coronation Street has always exploited flawlessly in the past. Admittedly the death of Maggie Jones (who played Blanche Hunt) left a yawning chasm in the humour stakes, but to me the obvious replacement is staring the show's masters right in the face.

How fantastic has Stephanie Cole been since joining as Roy Cropper's mother? Like when Blanche first returned years ago, the character of Sylvia initially came only with negative attributes but a settling-in process, helped by the ground rules that Roy managed to put in place, has developed the character beautifully. Now is the time to get her into the silver-haired circle that includes Emily, Rita, Norris and the brilliant Dennis. For as long as these older characters continue to be in place, Coronation Street shouldn't go far wrong. But, of course, that's only if the decision-makers allow them the airtime.

Emily, for one, hasn't been on for a while. Betty, meanwhile, doesn't get mentioned half as much when she's in view as she does when she's allegedly "in the kitchen" or "on her own behind the bar" as other characters do scenes in differing rooms of the Rovers. But Rita, who has never been more waspish in her manner before, plus Norris and Dennis (the tiny side story of his continued skintness is delightful) are still on the full-time rota and need more. Add Sylvia to the mix and they've got what's missing.

Let's be honest, there isn't a lot of humour elsewhere in the show at the moment. Sean used to be funny and whimsical, but he's now sour, jealous, pompous and hypocritical. Eileen, who is brilliant when given comedy to do, hasn't had a storyline of note since half-arsedly nicking Owen's accounts. Eddie and Graham, characters of loveable eccentricity, have both gone and been not replaced. Steve and Lloyd's domestic issues have prevented them from having showtime together in the cab office - and the sooner Eileen goes back to work there, the better. Julie, supposedly a funny character, just gets right on my nerves and it's only going to get worse if that Brian type becomes a regular as her beau. That's quite an alarming thought. Dev makes me laugh, but not necessarily in a good way. This bland story of his son's potential as a golfer will probably be quietly disbanded in a few weeks time.

There's still much Coronation Street is doing right - the Carla/Frank saga justifies the discomfiting subject matter with the dramatic and pinpoint portrayal from all concerned, while I like the prospect of Tyrone getting fruity with a smart looking girl, even though we all know deep down a Kirsty like that wouldn't even glance sideways at a Tyrone like him.

Oh, and if I can be shallow just for a moment? Anna Windass should be glammed up like that in every single episode. That's all.
Authored by Matthew Rudd
Email ThisBlogThis!Share to TwitterShare to FacebookShare to Pinterest
0 exclamations of response